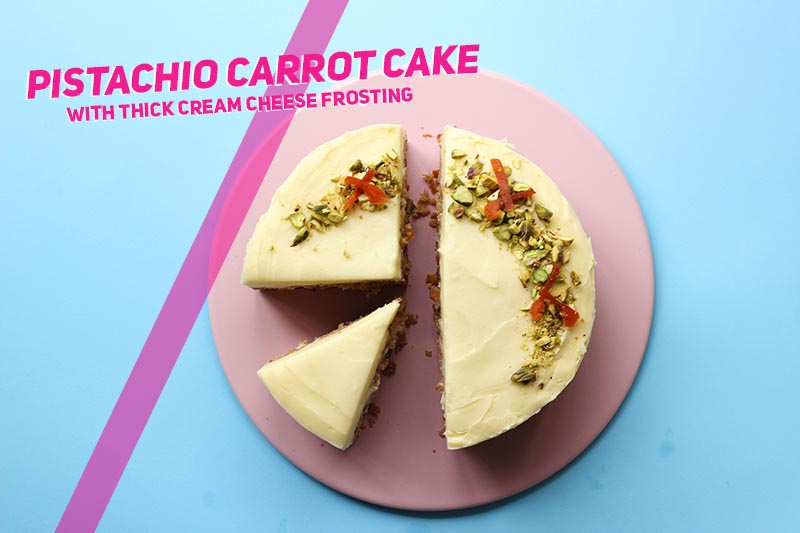 It’s. All. About. The. Frosting. I happen to love the cake also, but I’m not going to lie to the cake part, like heyyyyy you’re important too. I would never patronise carrot cake in that way. 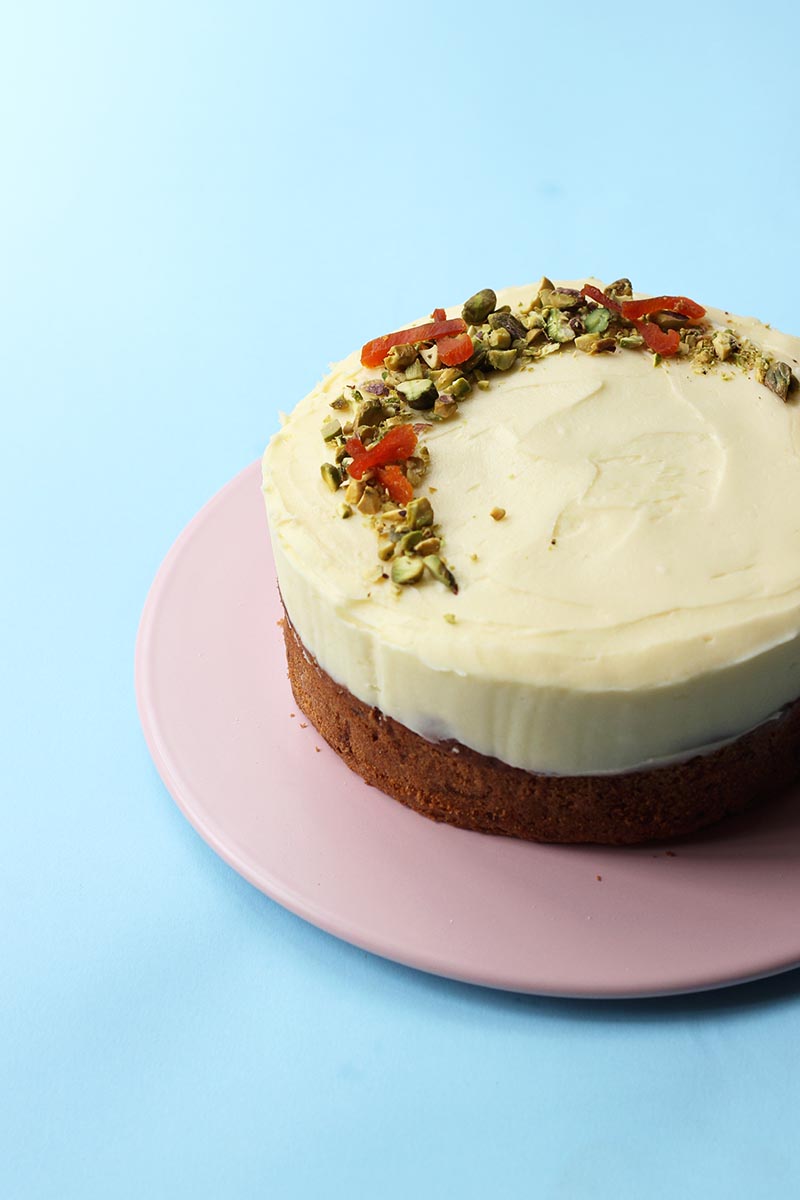 Beyonce’s all girl band is actually a perfect symbol for this cake, because it’s not just ANY carrot cake. It’s studded with sexy green pistachios, and it’s got a lil’ olive oil in the batter.

So it has depth and crunch and flavour, in addition to carrot cake’s usual lightly spiced, moist crumb. {I refuse to apologise for the word moist – it’s apt} 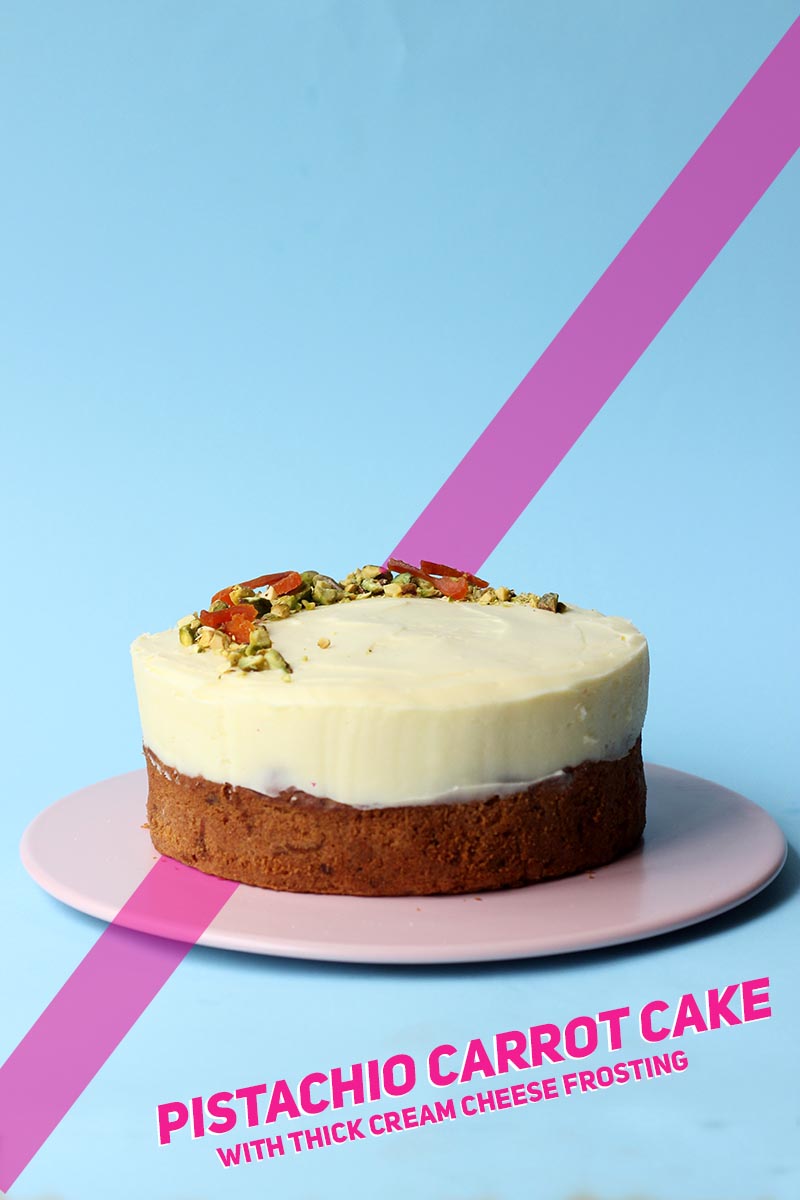 Even though this carrot cake is pretty special, and there would be plenty of people who would love it plain or with a little icing sugar, I also know that if I really want to bring in the crowds, I’m going to give the people what they want. 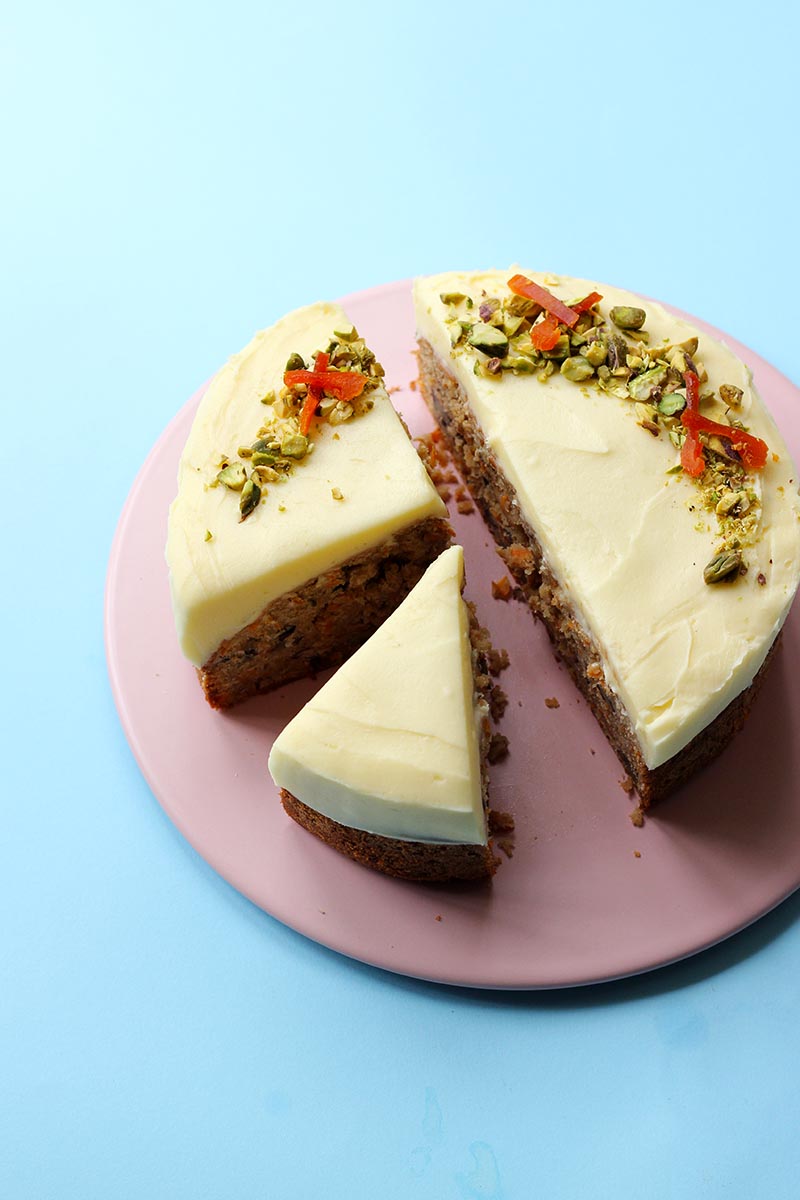 I did a lot of testing for this recipe, because I don’t know about you, but I’ve eaten some pretty average carrot cakes in the past AND I’ve had some cream cheese frosting disasters.

The cake is actually super straight forward, and indeed, so is the frosting, but there are a couple of helpful hints I have for you which will avert disaster. 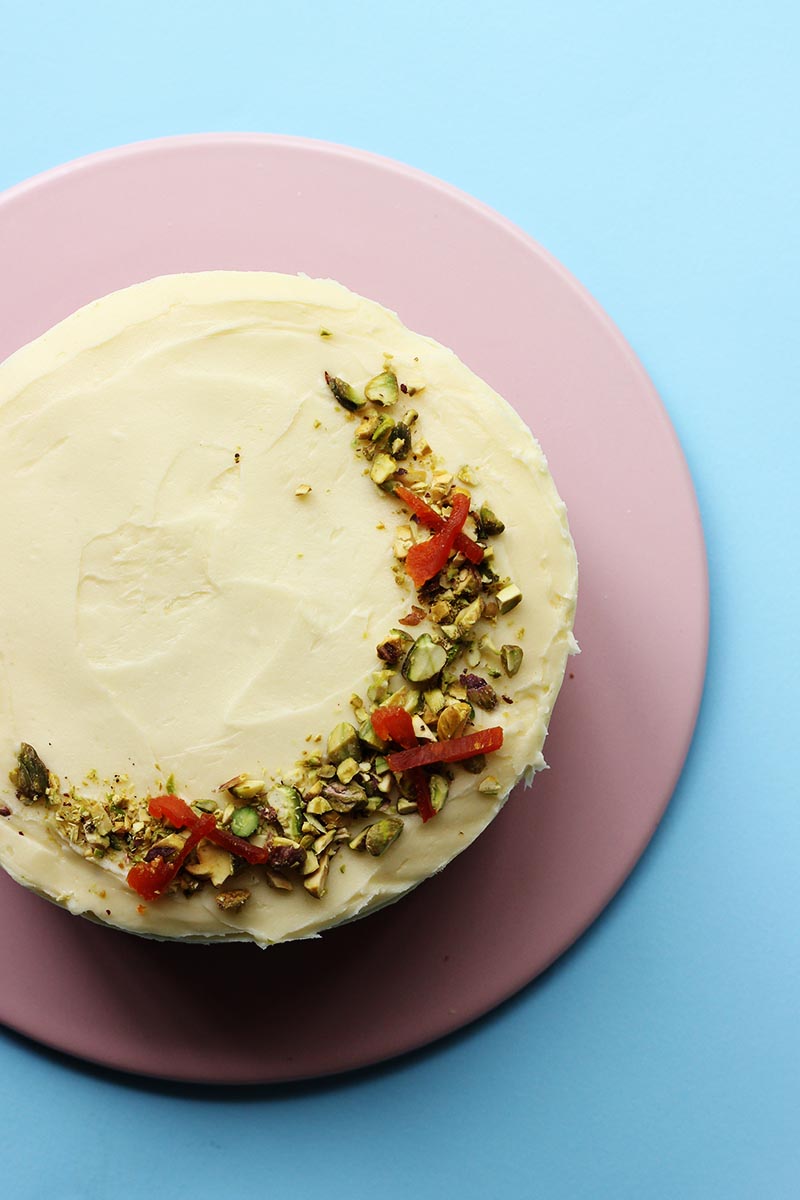 Have you ever made cream cheese icing, totally followed the recipe, and then inexplicable ended up with a ridiculously runny slop that’s pretty much good for nothing? Me too. From what I can deduce, the reason for this is that cream cheese separates, causing liquid to leach out and dissolve the icing sugar, ergo runny frosting. Cream cheese can split from either over-beating, or becoming too warm. SO… 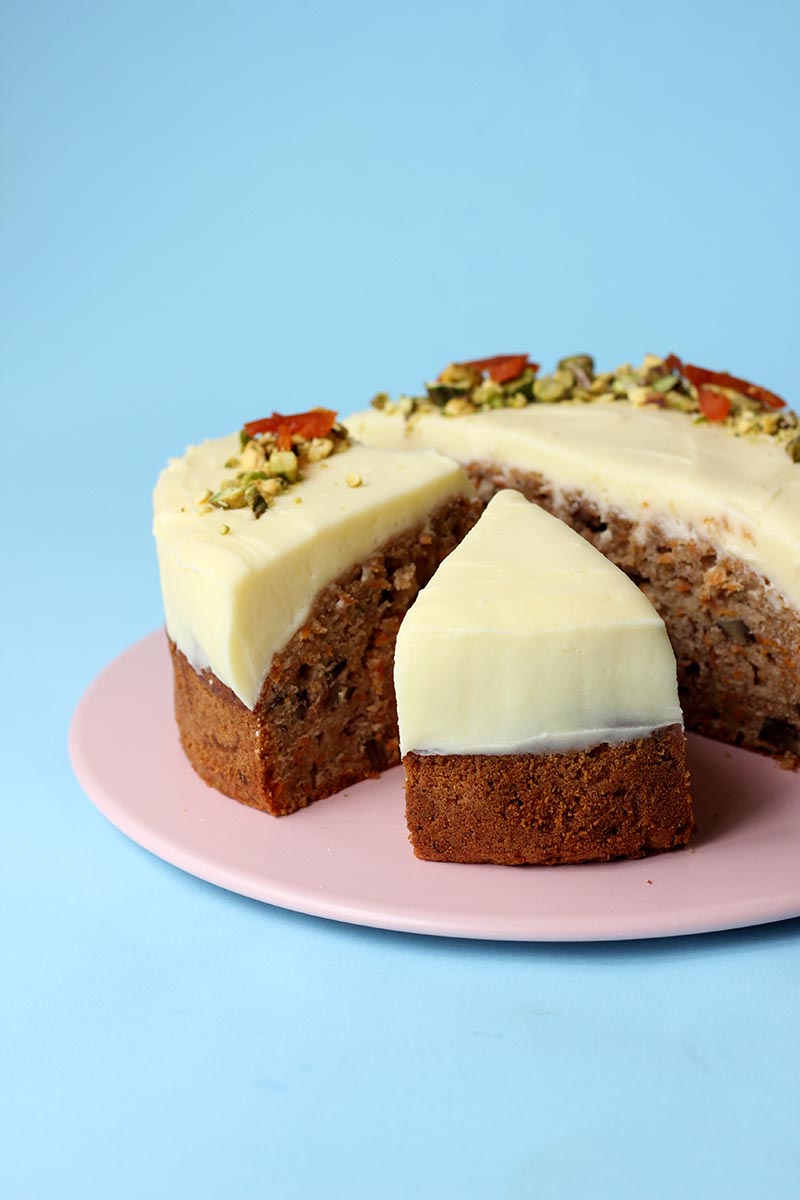 The ratio of butter to cream cheese to sugar in this recipe makes for a not-too-sweet, and fairly thick frosting. Something that will stand up fairly firmly, which allowed me to do the cool, straight-sided edge on this cake.

And there you have it! Now tell me, carrot cake, are you a fan? Or are you really just in it for the frosting? Be honest! 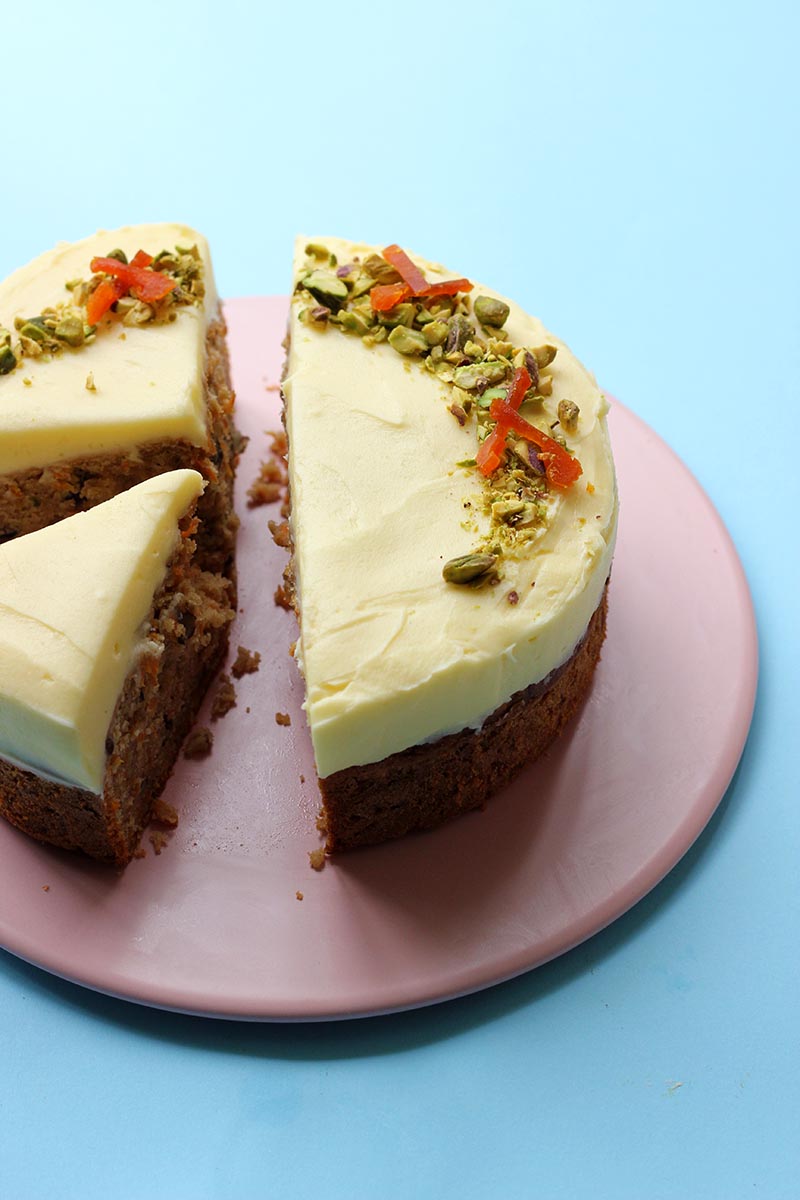