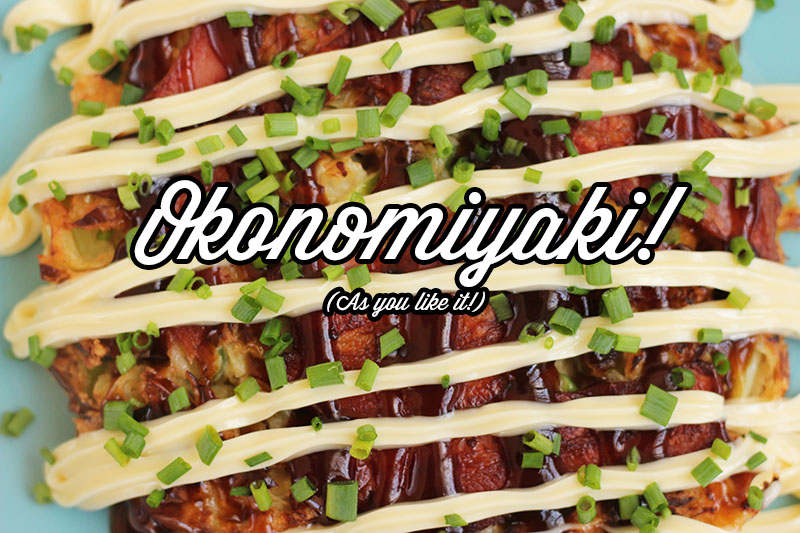 Konichiwa! And welcome to the final recipe for Japan Week.

There is still Sunday’s post about Japan, but this is my last recipe and MAN, did I save a good one for last! May I introduce you to Okonomiyaki, which breaks down into two Japanese words: okonomi and yaki. Okonomi means ‘as you like it’ and yaki (like yakitori) means ‘grilled’. So we’re already off to a pretty flexible start, when the name basically means ‘whatever you want, I shall throw into this pancake mix and grill for you!’ 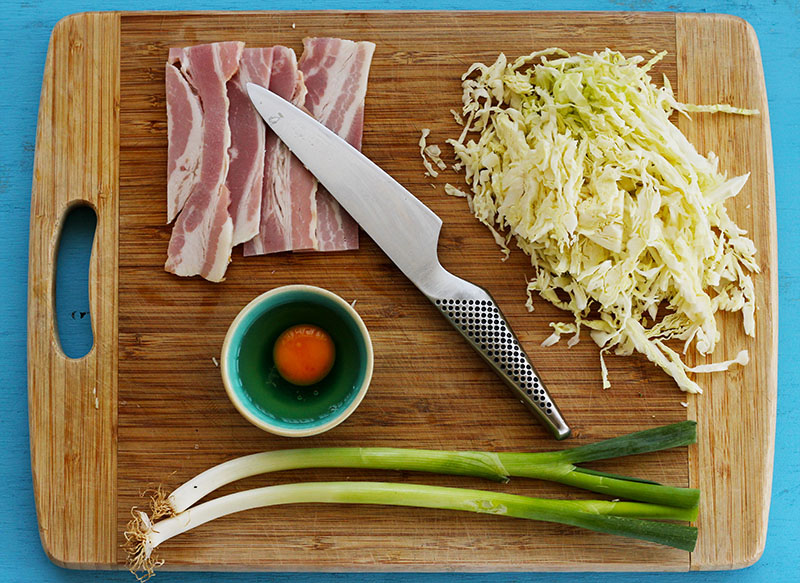 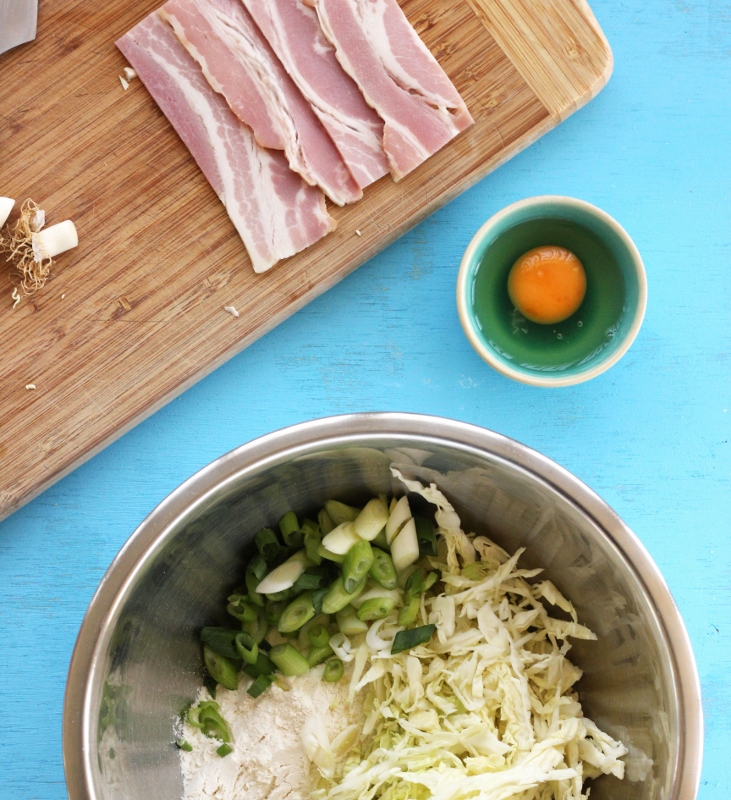 According to all the delicious research that I have conducted, it seems like there are a few ingredients that are always around in your okonomiyaki (say it! It’s so fun to say!). The mainstays of this dish seem to be shredded cabbage, a savoury batter made with eggs, flour and broth, and shredded cabbage.

Aside from these guys, you might find grated yam or potatoes, cooked noodles, thinly sliced pork belly or bacon, green onions, seafood, kimchi, mochi, and even cheese or a fried egg on top! The other two non-negotiable ingredients, as far as I am concerned, are the okonomi sauce and japanese mayo that adorn the top of the dish. 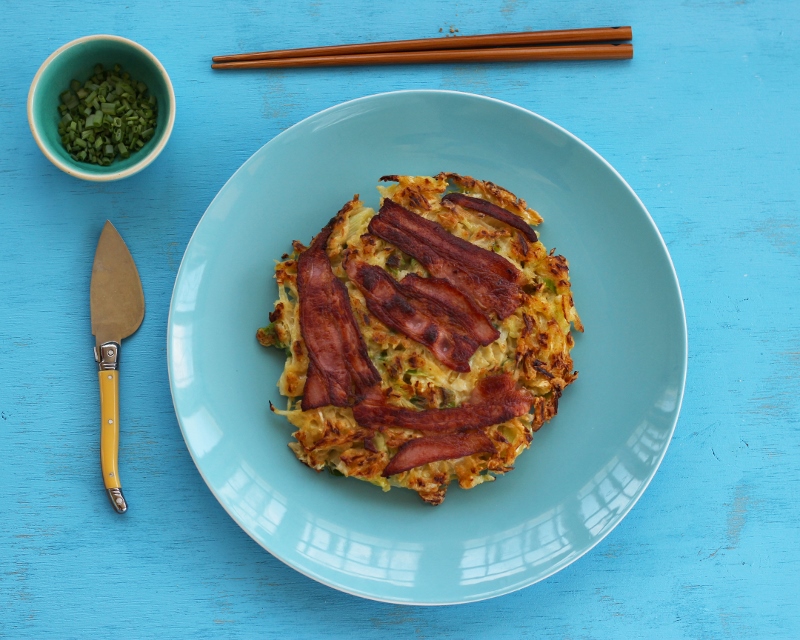 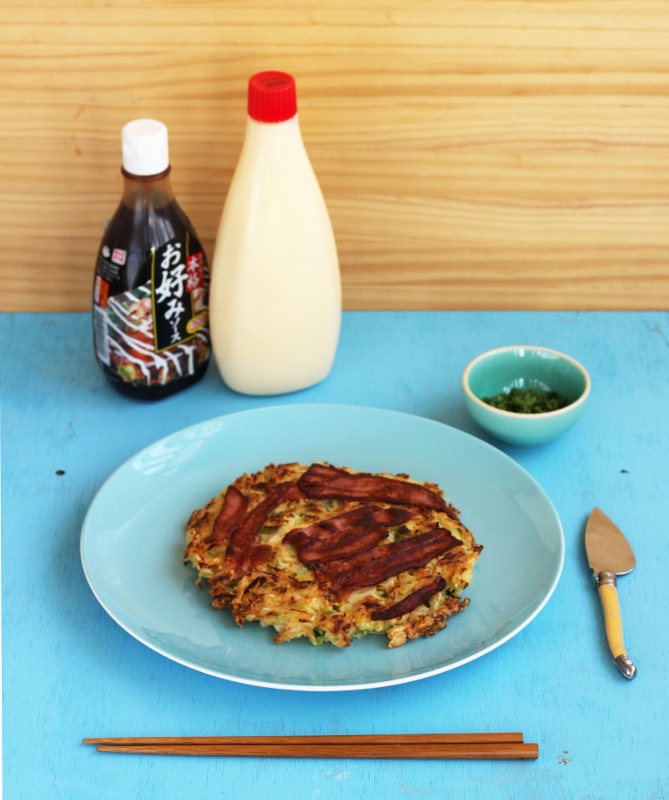 This is a really great springboard for people who are maybe not so familiar with Japanese food outside of sushi and sashimi. The format is something that I think a lot of people can get down with – big veggie pancake? Hell yeah. That plus it’s got bacon in it, so it’s a total win. I keep my version pretty simple, lots of cabbage and spring onions (scallions), crispy bacon, and then slather on your sauces.

Oh and if you didn’t know by now, Japanese mayonnaise is incredible. It is the best mayo your mouth has ever tasted. No joke.

[Don’t forget that if you want to get involved with JAPAN WEEK, you can create something and post it on your blog this week, and I will incorporate it into this weeks Sunday Supplements post, which, you guessed it, will be all about Japan! Even if you have an old post about Japan, let me know about it! Tweet me, or Tag me on Facebook, Instagram or Pinterest!] 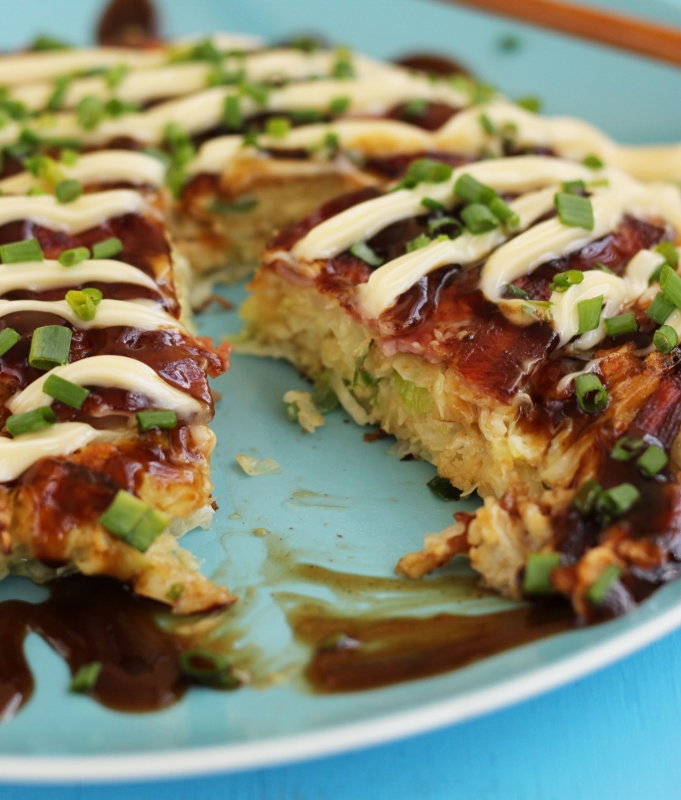 Serves 2 for lunch or a light meal, 1 for a greedy dinner.

In a medium bowl, whisk together the flour, egg, water and soy to make a batter. Stir through the cabbage and sliced onions until well combined. Slice the two rashers of bacon in half to make four short lengths, and then place them into a cold frying pan with the vegetable oil. Cook the bacon over a medium heat until lightly golden on one side, then flip it over, and immediately pile the pancake mixture on top. Pat the pancake mixture into a patty, about 2 cm/1 inch thick, with the bacon underneath, and then turn the heat to low, and place a lid on the pan. Leave to cook for 2 and a half minutes, before flipping the cake over (including the bacon), and replacing the lid for a further 2 and a half minutes. Slide the pancake onto a plate, slather with your two sauces and chopped chives, and dig in! Try and eat it with chopsticks – much more fun.