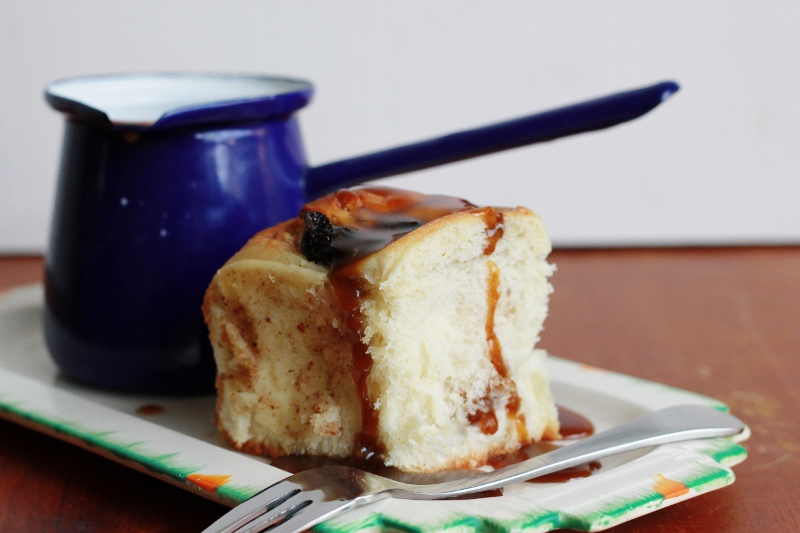 PRUNES. I figured that I would just put that right at the top of the post, so that those of you who are really REALLY averse to our friend, the dried plum, can take your leave of this page, and hopefully stop by again next time. I hope it’s safe to assume that everyone left is either already a fan, or is ready to be convinced of the joys of this sometimes negatively portrayed dried fruit. Let me get to convincing… 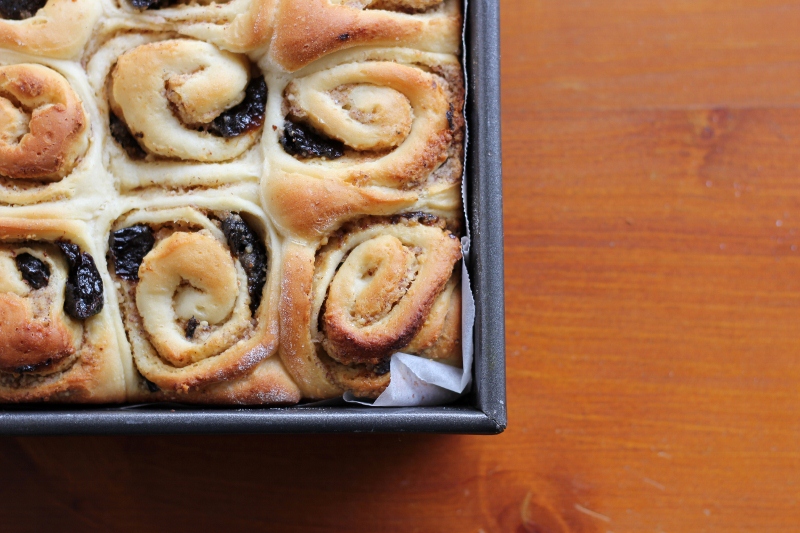 I love prunes. There – I said it. They are the most lush of all the dried fruits. Tasty, with a caramelly intensity and velvety texture, the prune (aka the dried plum) has just suffered from a lot of unfortunate bad press. We all know that overeating these babies will do wonders for the health of your lower intestine, and I choose to look at that as a positive feature, as opposed to a negative. Let’s not focus on the bowel cleaning power of these babies, let’s focus on flavour and texture.  For these buns I simmered my health-giving friend, the luscios prune, in a very special spanish sherry called Pedro Ximinez. It brings out and enhances the complex spicy flavours of the prune, and tastes exactly like Christmas. Yum. 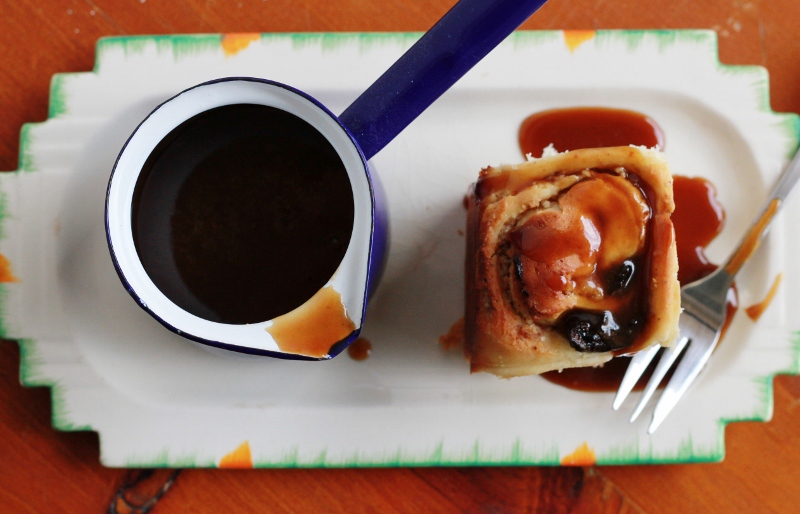 Once the prunes were totally drunk from swimming around in sherry, I wrapped them up in a soft, fluffy, vanilla-scented dough, along with a swirl of sweetly aromatic hazelnut frangipane. After a brief spell in a hot oven, the buns arrive steaming and smelling just like roasted hazelnuts, yeasty dough and sticky sweet prunes. I pulled one of the tender little rolls from the pile while clouds of steam wafted from the pan, and bit into the gooey insides. Heavenly. But as a lover of prunes, that was to be expected. The dark complexity of the prunes, all wrapped up in a cloak of soft vanilla bread, with a hazelnut swirl? That’s a nice breakfast, by anyone’s standards. But will it win over a prune hater, I wondered? 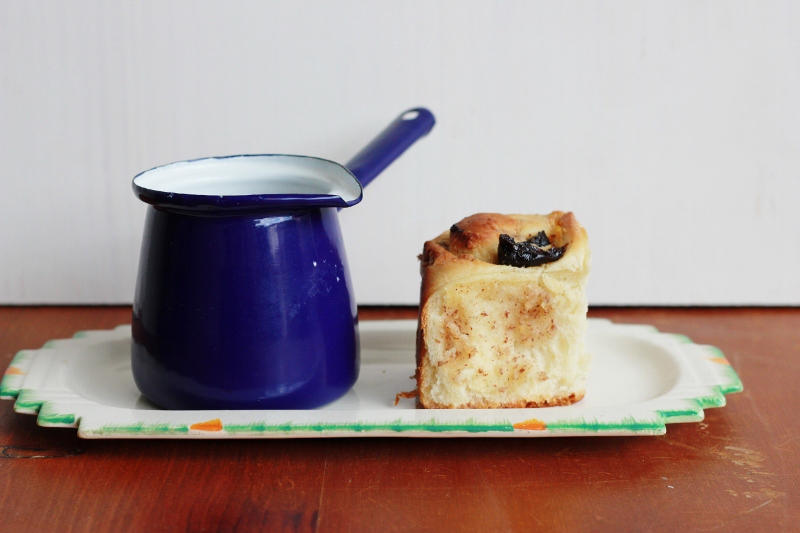 After all, haters gon’ hate… And that’s when I decided to break out my universally beloved friend (in the style of The Princess Bride), BUTTERSCOTCH. Because when one of these buns, gets all drenched up in a pile of buttah-scotch? That is a thing of great beauty. That is enough to convert any prune skeptic. Heck that is enough to convert any kind of skeptic! Because while they’re eating it you could just yack and yack, and they would just nod their heads. It’s important to note that you cannot put too much butterscotch on these. That is impossible. So you totally have my permission to go nuts with this, see my example below. 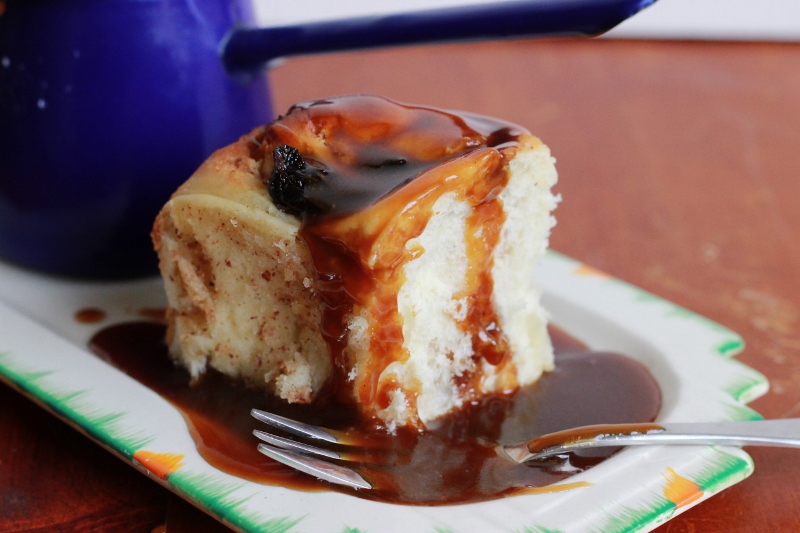 So the recipe basically goes: 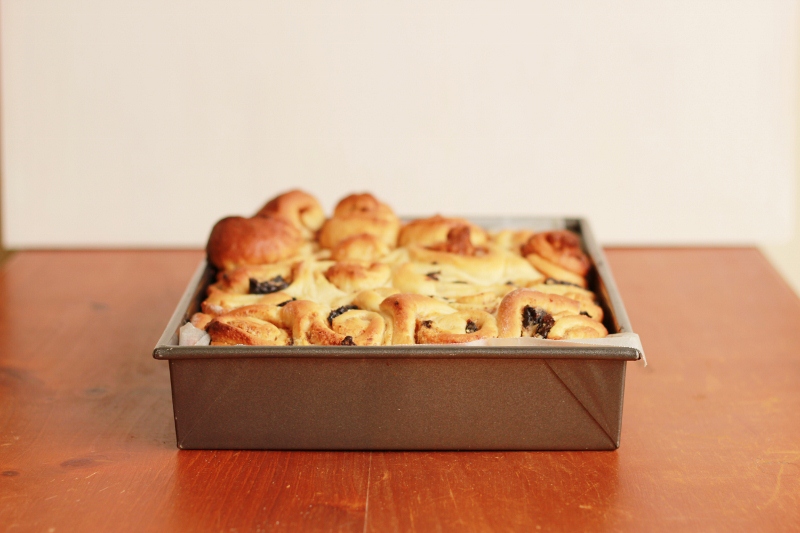 100ml Pedro Ximinez sherry (or any sherry, or other liqueur of your choice)

50g butter Firstly, begin with the bread dough. Place all of the dry ingredients, using the smaller amount of flour, into the bowl of a stand mixer fitted with the dough hook. Melt the butter in the microwave or on the stove top, and add the milk and the egg, before whisking together. Pour the whisked egg, milk and butter into the dry ingredients and mix on a medium speed until the dough comes together. It should begin to come together into a ball after around 4 minutes. If it seems very wet, add the remaining flour. Once the dough forms a smooth, springy ball, remove the dough hook, and cover the bowl with cling wrap. Set the bowl aside for around 30 minutes to rise. Place the prunes and sherry in a small saucepan and bring to the boil. Set aside to steep. To make the frangipane, place all the ingredients in a medium bowl and beat together until smooth and well combined. Set aside until required. To make the butterscotch, place all the ingredients into a small saucepan and bring to the boil. Simmer until slightly thickened. Set aside until required. This can be refrigerated and reheated on the stove as required. Preheat the oven to 200C. Once the dough is risen, knock it down and place onto a lightly floured surface. Using your hands pat and push the dough out into a rectangle roughly the same size as a placemat. Spread the dough with the frangipane mixture, going right to the edges. Chop the soused prunes and scatter them over the hazelnut-covered dough. Beginning from one of the longer sides roll the dough up tightly, pinching to seal the final edge. Slice the dough into half, then half again, then slice each quarter into three to make 12 rolls. Place the rolls into a lined brownie tin (about 30x20cm), and leave to rise for another 15 minutes. Once the rolls look duly puffy, place them into the oven, rotating at halfway through 20 minutes. Remove from the oven, and leave to cool for at least 10 minutes, before tearing apart and serving drenched in warm butterscotch. DRENCHED.