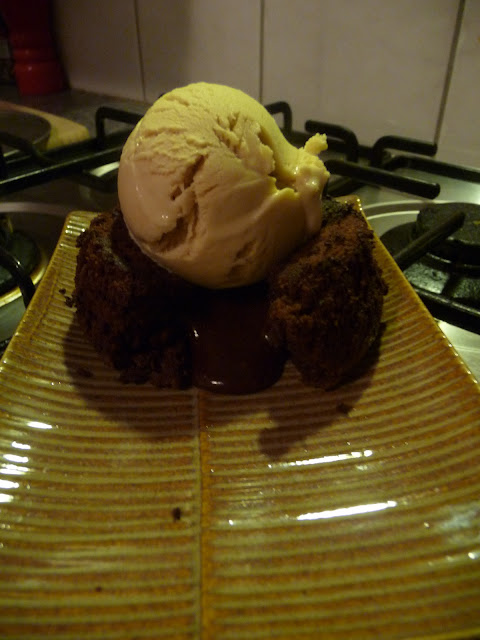 A cake by any other name would smell as sweet. The old adage seems to have proven true for this confection, known by your less high-brow establishments as chocolate “lava” cake, by your mid range establisments as a “molten” chocolate cake and by the high-brow masterchef following community as a chocolate fondant, striking fear in the hearts of all contestants. I guess I’m just picky, but I have to say I’m not super keen on any of these naming options. To me, it feels like they are all trying to evoke something other than what we have here. 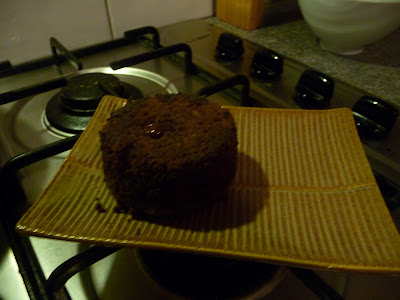 Not the most beauteous creation is it? From this angle it appears that I have baked a small and somewhat shabby chocolate cake. It’s pretty boring, I wouldn’t cross the street for it. BUT WAIT!! You didn’t see the next shot. 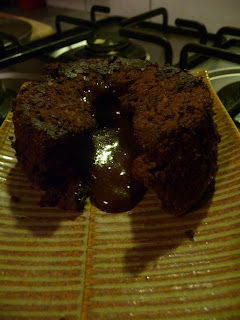 Mmmmmm? Jealous? Once you bust through the shabby exterior, you get to the sweet, sweet innards. It only looks shabby because it is a thin wall of just cooked cake, barely holding back a steaming river of molten chocolate lava fondant gooo…. OK, maybe I see why they went with those terms. From this point the leap to the brown sugar ice-cream is a straight forward one. What is awesome? I asked myself. The answer? Chocolate chip cookies. From there the idea of combining the rich sweet caramel flavour that a brown sugar cookie has, with the creamy sweetness of a plain custard was a straight-forward idea. Bam, brown sugar ice-cream. 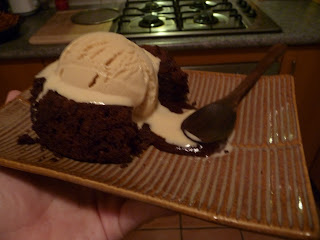 So once your subtle brown sugar ice-cream (or essence of cookie, as I call it) hits the hotly deliquescing interior of your pudding-cake, you have attained ULTIMATE COOKIE. The sweetest, gooiest chocolatiest morsel of goodness. All the best things about a cookie, the sweet chewy crisp sugar flavour, and the pockets of melting chocolate, only times 100. It will never be a cookie, but it’s a damn fine take on it.You wanted sugar hit? You got it baby.

The best part of the whole thing is, I made this fondant cake, at 8 o’clock at night and the whole thing was over by quarter to 9. Plates licked clean. Have no fear of the fondant! It is not as hard as they make it sound, you know why? Because the best thing about eating and cooking at home, is that there is zero pressure. Matt Preston is not going to tell me that the plate I used should have been a different colour (though I now know) and all I have to listen to is the satisfied munching of a happy boyfriend. Job done.

Chocolate (name of your choice) Cake

I made a couple of changes to this recipe as I went, first of which was to use salted butter, because the combination of sweet and salt is sublime, and secondly I added some cocoa to the batter, to up the intensity. I also, being lazier than Donna Hay, simplified the steps a little and cut down on the required equipment.

2 heaped dessert spoons of Caster Sugar
1 heaped dessert spoon of plain flour
1/2 a heaped dessert spoon of best quality Cocoa
Butter two 1 cup capacity ramekins and set the oven to 180C fan forced (190 or 200C without the fan).
Melt the butter and chocolate together in a small bowl in the microwave. I do this in bursts of about thirty seconds, stirring in between.
Meanwhile beat the egg, yolk and sugar together with a whisk. Donna says until pale and moussy, I just did it until the chocolate was ready, so it was more frothy than moussy.
Next, sprinkle the flour and cocoa onto your eggs and begin to fold them together, after a few folds, scrape in the chocolate and keep mixing, gently but firmly until it is all combined.
Divide between your two ramekins and bake in your preheated oven for 12-15 minutes. Mine were in there for the full fifteen, but I pulled them out to check at 12. I reccomend that you do the same.
When they seem cooked, but still with a hint of a wobble, they are ready to go.
Let stand for about 3 minutes out of the oven if you want to turn them out, otherwise just pile the cream or ice-cream on top, hold the ramekin with a tea-towel and go for it. (This is what I can most often be found doing).
Cheers!
Sarah
Tags from the story
Brown Sugar, Cake, Chocolate, Ice Cream
1
Facebook Twitter Pinterest
Google + LinkedIn Email
Written By
sarah
See More