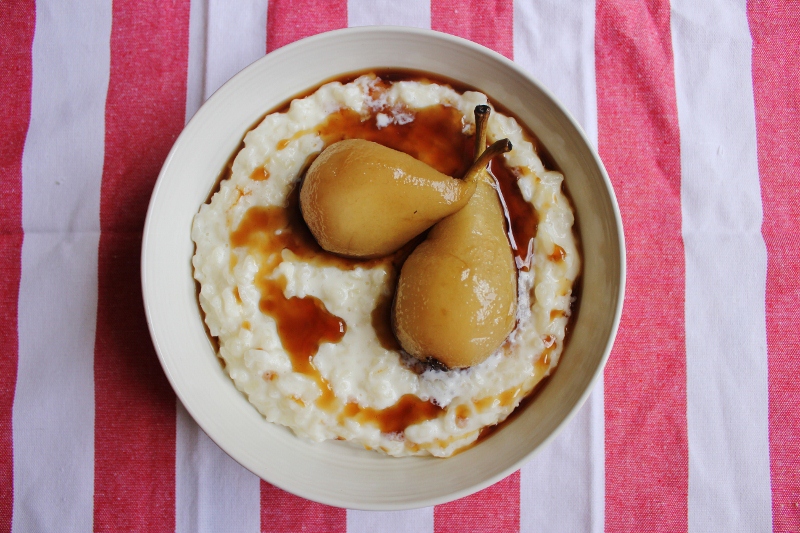 As a typical Australian gal, I grew up drinking a tall glass of milk at least once a day and often more. Similarly, one of my favourite desserts as a babe was just leftover cooked rice reheated in milk, with a few spoonfuls of sugar mixed in. Yes, I am aware that it sounds disgusting, but there is nothing like a warm, sweet bowl of milk-soaked carbohydrates. That’s what comfort food is to me – puddings. I certainly have not adopted the British quirk of referring to all desserts as “puddings”. Firstly, because I find it inexplicably irksome, and secondly if all desserts are puddings, then what would we call that very special category of warm, comforting, soft, delicious desserts? If everything is a pudding, then what would we call puddings, I say? 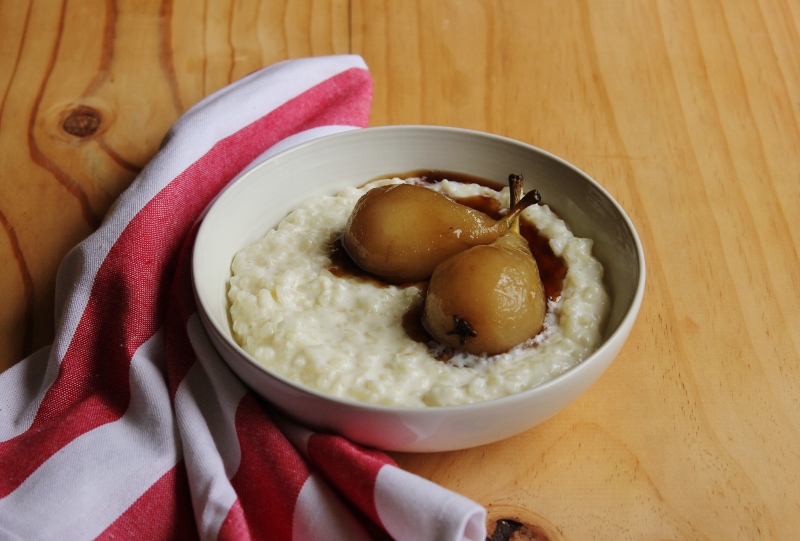 Which brings me to this rice pudding. It’s going to be difficult, but I am going to try and make the case for this rice, as an anytime-of-day kind of food. Seriously. When you read the recipe, you’ll see that it’s just straight milk and rice, with some sugar stirred in at the end. Probably a lot less than you’d sprinkle on your weet-bix. The carnaroli rice is arborio’s slightly creamier cousin, so what you end up with here is a thick, creamy rice-studded porridge. Breakfast! If you can get behind a bowl of oat porridge in the morning, then you will love this rice first thing. 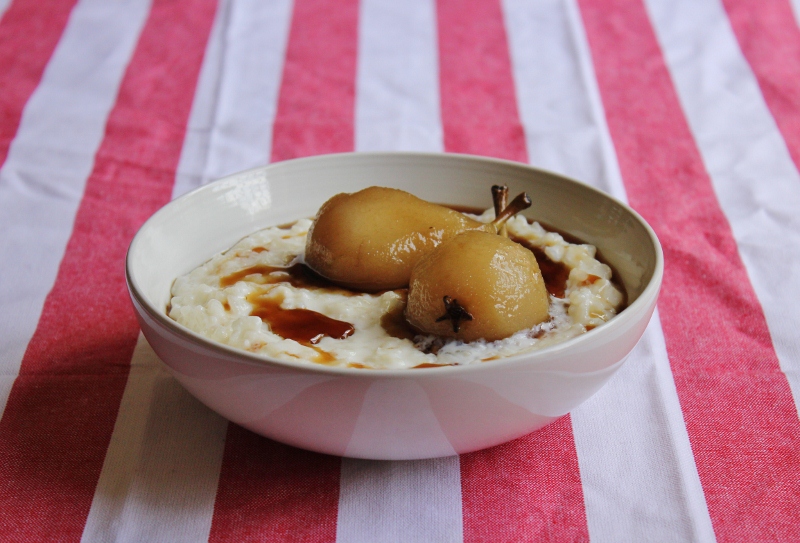 Now that I’ve put the hard sell on you about breakfast pudding, I think I can ease up. The idea of eating creamy rice with sweet brown-sugar poached pears at any other time of the day just seems natural to me. Only this weekend, while the rain poured down here in Queensland, and the wind absolutely lashed against us, a shallow bowl of rice pudding and brown sugar pears brought a feeling of cosy safety. Later that evening after the rain had all fallen, and the steam had started to rise off the sodden ground, a bowl of cold rice pudding, drizzled with pear-scented brown sugar syrup was the perfect way to cool down, and assess the situation. 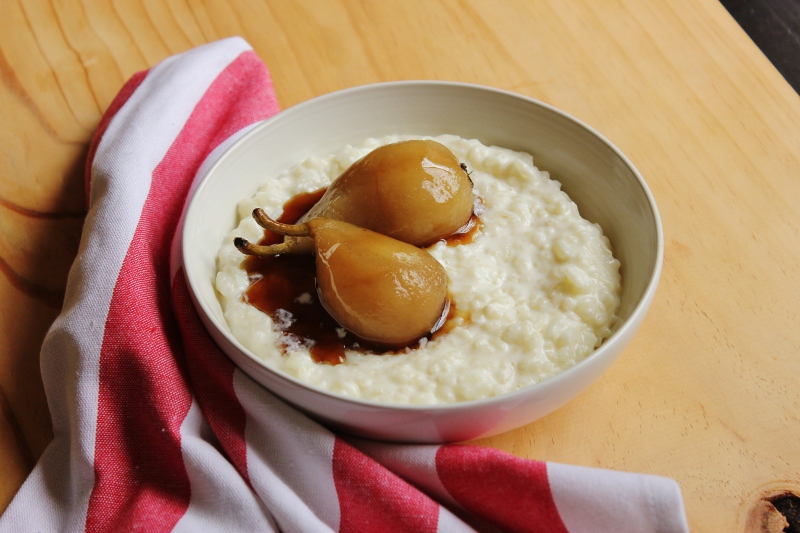 I cannot extoll the virtues of this recipe enough. It’s so simple, a child could make it (in fact, this would be a great one to do with kids!*). It is simple and homey, but at the same time elegant and sophisticated. As at home at an elegant supper with friends, as it is scooped cold out of the fridge into a mug, and eaten with a tea spoon on the deck. I think a lot of Queenslanders may be in need for a little comfort at the moment. I strongly suggest rice pudding. 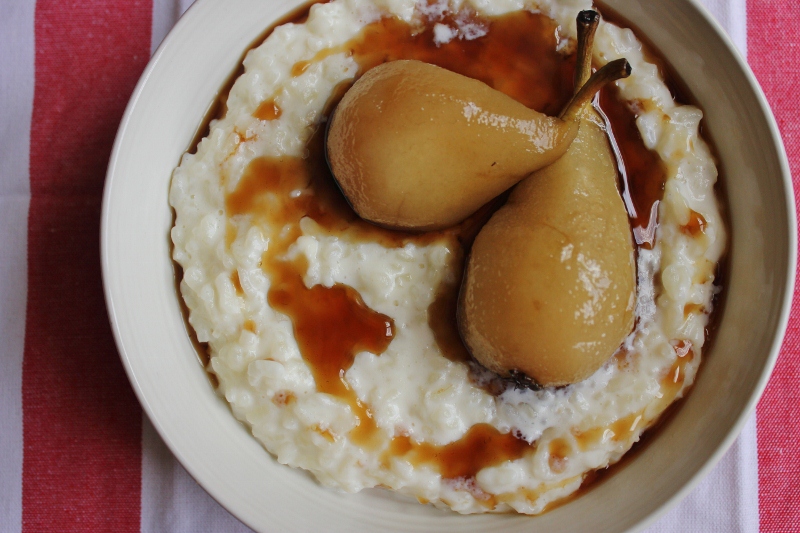 sugar to taste In a medium saucepan, place the rice and milk, and place over a medium-high heat. Bring the mix to a simmering point, and then turn it down to medium low, and let it blip away for around 30 minutes, or until the rice is beautifully tender. Be sure to stir the pudding every few minutes, to stop the rice from catching or the milk from burning.

1 cup brown sugar In a medium saucepan, combine the water and brown sugar and bring to a simmer. Meanwhile, peel the pears. You can try and core them using a melon baller, but for pears this small, I simply left the cores in – the choice is yours! Place the pears in the liquid, and let them gently simmer for about 10 minutes. At this point any ripe pears should be done and can be removed and set aside, you can test them with a small paring knife, it should slide into the pear without much resistance. Unripe pears may take as much as 20 to 30 minutes to cook. Just keep simmering and testing as you go. Once the pears are all done, the remaining liquid should be brought to a boil, and then reduced down to a thin syrup, all the better for chilling and pouring over the pears and rice. This syrup is also excellent with pancakes!