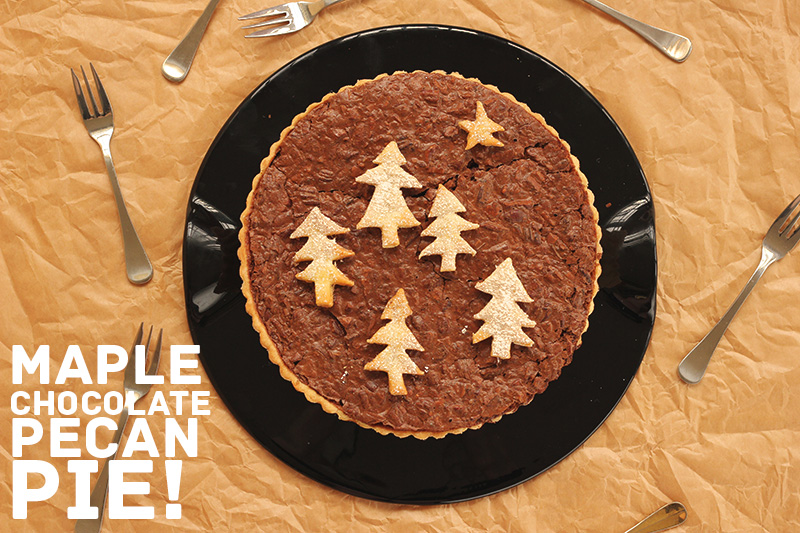 It’s Monday, chums, and as a result, I baked you a pie.

Because Pie Mondays should be a thing. Work would be a lot less of a bummer if you knew there was a cup of coffee and a slice of pie coming your way around 11 o’clock. What kind of pie would you have? Apple, Blueberry, Chess? Or Maple Chocolate Pecan? It was a trick question, OF COURSE you can have a tiny slice of each! But make sure you don’t miss out on this one. Smoky maple, dark chocolate, moreish pecans and flaky pie crust are what makes this pie unmissable. The pie crust forest is what makes it adorable! 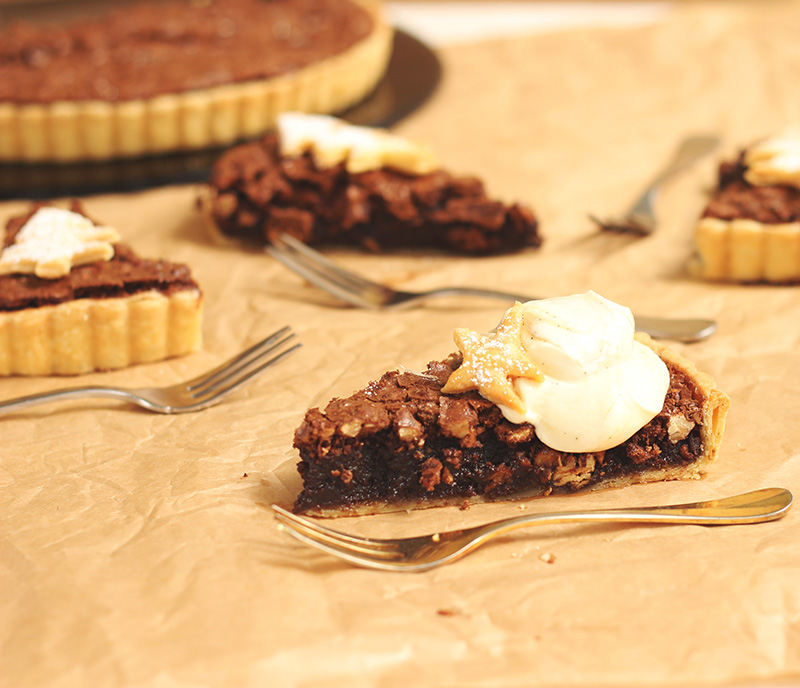 This recipe actually started off as a Brownie Pecan pie, but I got a bit sick of that idea. My reasons are twofold; firstly, all the recipes for Brownie Pecan Pie that I could find involved using a boxed brownie mix – I’m not snobby about it, but it’s a bit humdrum. Secondly; once I started thinking about it, I reasoned that a brownie is not necessarily improved by pie crust.

So I instead of trying to get from a brownie to a pie. I went the other direction and tried to get from a pie to a brownie! And I ended up right where I wanted to be. Right in the pocket. Fudgy without being too dense, sweet without being cloying or sickly, and with enough depth and smokiness from the dark chocolate and maple to make for a stand out pie. 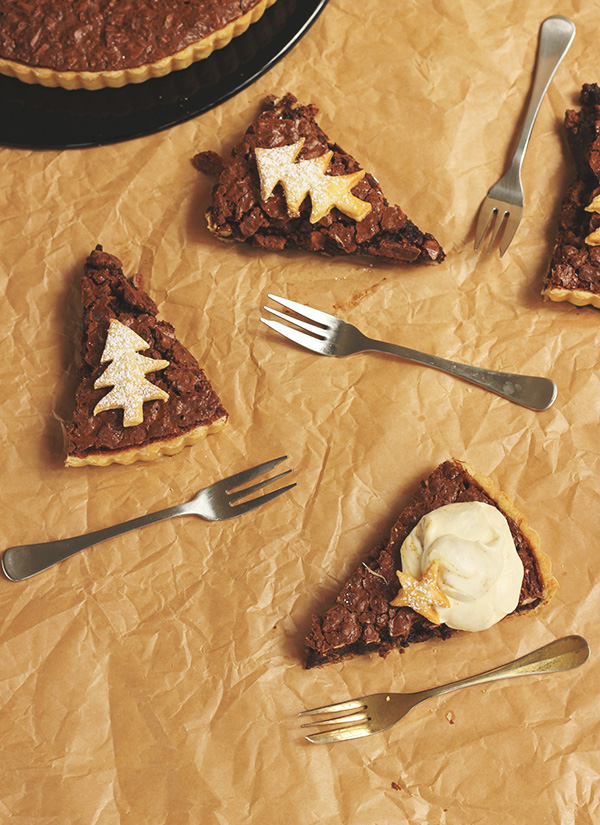 Now, I love pie, but making it in Australian heat can be a four-letter-word filled process. Let me tell you how I keep my pie life simple: 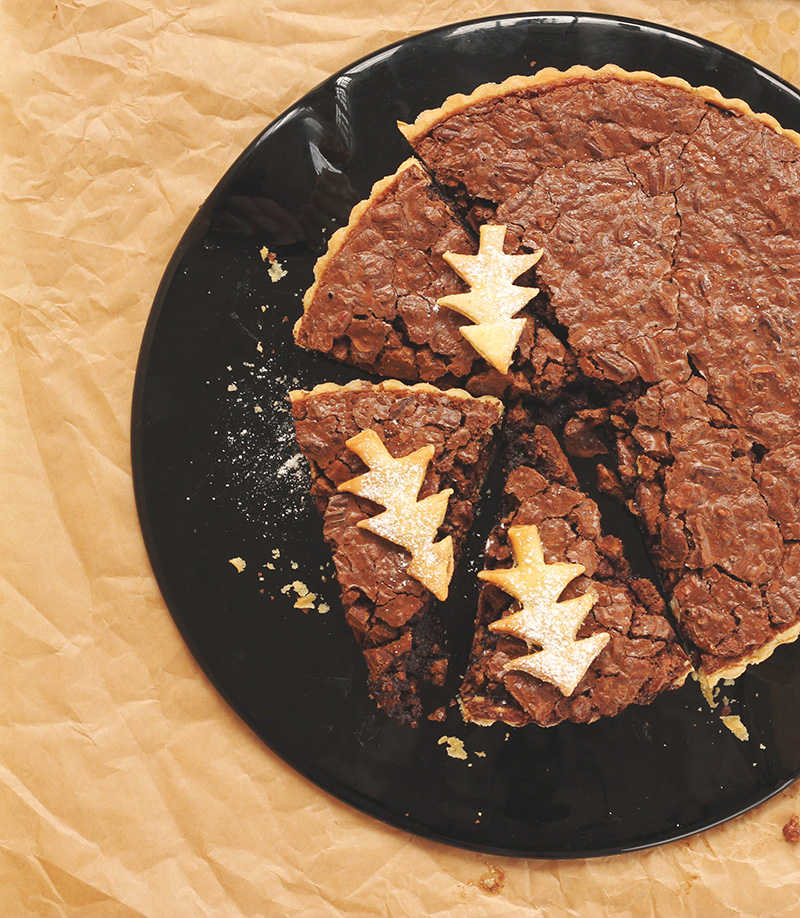 OK, so I didn’t exactly listen to my own rule number 6. I sliced this baby while it was still warm, but sometimes I just can’t resist the lure of the pie. It’s all those cartoons I watched as a kid where people left pies cooling on window sills and they were constantly stolen. I think there is beauty in a warm crumbling piece of Chocolate Maple Pecan Pie, though, don’t you?

What are you baking this holiday season? I hope there’ll be pie! 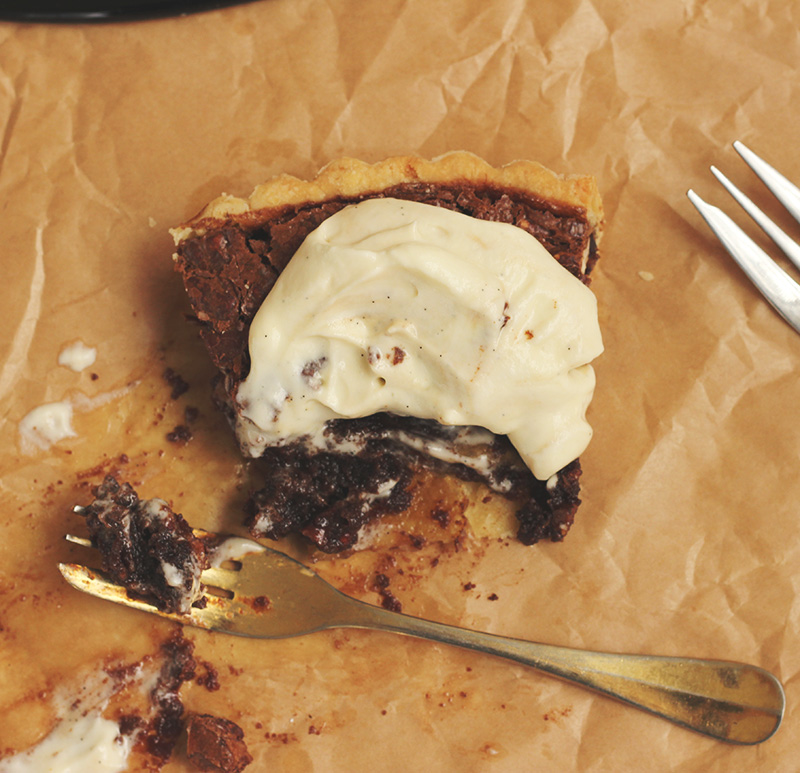 First, make the pie crust. In the bowl of an electric mixer, combine the flour, sugar, and salt together.Cut the cold butter into cubes and toss the cubes in the flour mixture to coat. Turn the mixer onto very low speed and mix until the mixture looks like oats, with some large pieces of butter still visible. Alternatively, you can just rub this mixture together with your fingertips, like making crumble.

Turn the mixer up to medium speed and drizzle the ice water into the bowl. As soon as the dough looks like it’s about to come together, turn off the mixer, and turn the dough out onto a floured surface. Pat it together, and divide in half, flatten each half to a disk and wrap each disk first in plastic. Keep these in the fridge right up until you use them, or at least 1 hour. (The dough can be refrigerated for up to 3 days or frozen for up to 3 months. Thaw in the refrigerator before proceeding with the recipe.)

Roll out your pie crust, and place in the fridge to chill. Preheat the oven to 180C. Placed the chopped pecans on a lined baking sheet and toast in the oven for around 5-10 minutes. When you can smell them, and they are slightly darker in colour, they are ready. Remove from the oven and set aside to cool.

Remove the chilled pie crust from the fridge, and pour the filling into it, before placing it onto a preheated oven tray and baking for 52-57 minutes. The pie will rise in the oven and possibly crack, before sinking back down as it cools. You can test whether it is done, by poking a knife into the centre of the pie – if it comes out basically clean, with some filling clinging to it, your pie is ready. Cool for at least 20 minutes and tuck in.