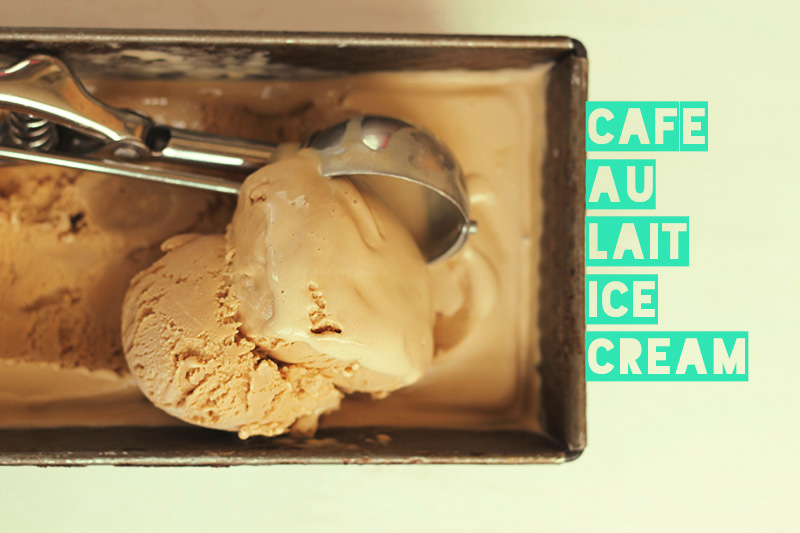 I’d like to introduce you to someone. This is coffee ice cream. Coffee ice cream is the unsung hero of Holiday desserts. It’s a best friend to any non-fruit pies (we’re talking Pecan, Chess, Shoo-fly, Chocolate, Buttermilk, dare I say Pumpkin?). It’s fancy enough to serve on it’s own. It’s different enough to be interesting, but not so different as to be challenging. It’s somehow both plain and luxurious at the same time. And its got caffeine in it, which is so necessary at this time of year. I love it, you guys. 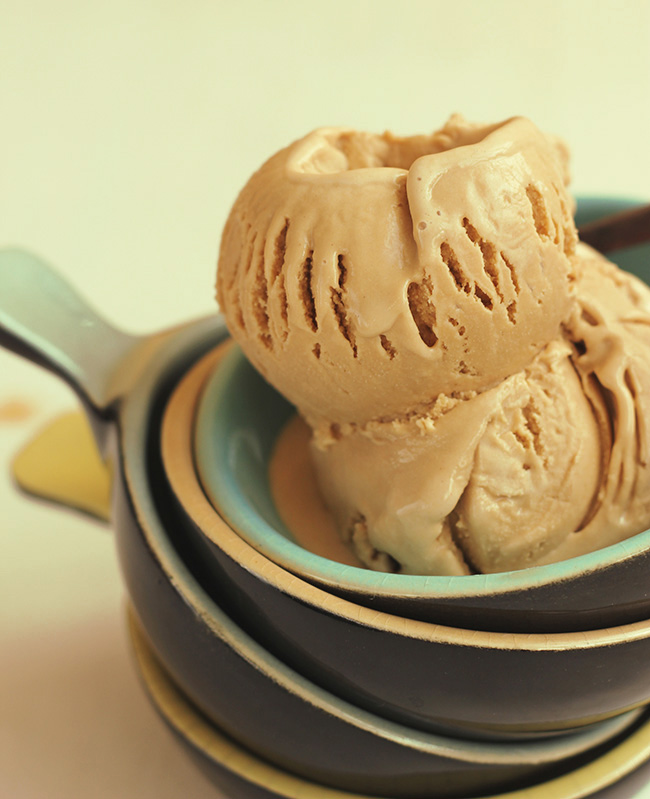 I’ve called this recipe Cafe Au Lait ice cream, because it’s a step up from your usual coffee varieties. I like my coffee ice cream the opposite of how I drink my coffee, you see. Every morning I drink a cup of strong coffee, black and barely sweetened. But when it’s time for a coffee ice cream, I want it to be rich, smooth and super creamy. Ice cream with a velvety texture and a strong, rich coffee taste. Which is where the secret ingredient comes in: evaporated milk. Just 1/2 a cup of evaporated milk takes this from a plain old coffee with a dash of skim, to a full on cafe au lait topped with whipped cream. Hubba hubba. 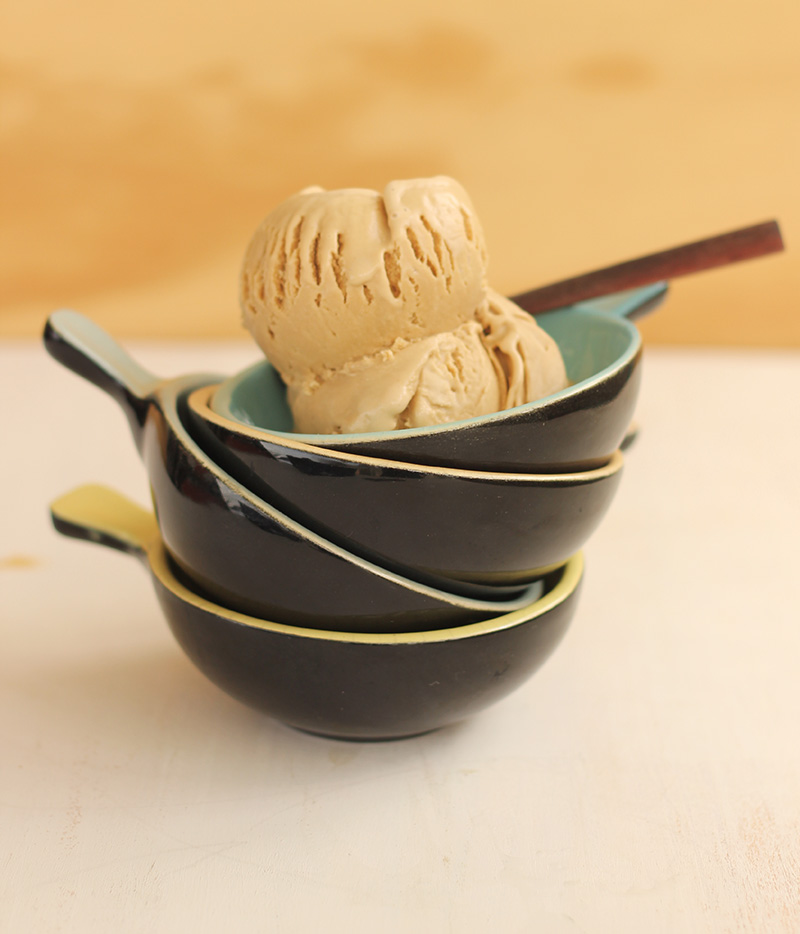 So if you’re looking for something a little different to serve alongside your holiday desserts this year (it’s also great with Christmas Pudding!), then YOU MUST try this coffee ice cream. The recipe is based on Jeni’s technique, with some tweaking from me, and it won’t let you down. If you’re a real tiger you could even make an affogato with this, but don’t blame me if you’re too wired to sleep.

And did I mention this is crying out for waffles and maple syrup? Because it is. Screaming out. 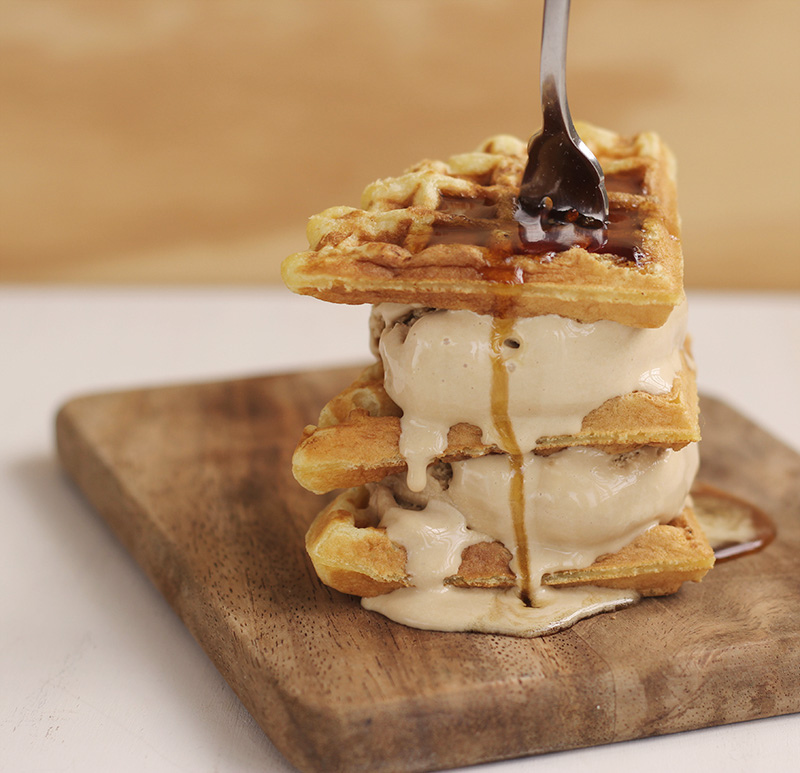 Recipe by Sarah Coates for The Sugar Hit, based on Jeni’s technique.

First, place the canister of your ice cream machine in the freezer to chill, most models need at least 12 hours. Next, place the cream cheese and salt in a large mixing bowl and beat together until smooth; set aside. In a small bowl, combine the cornstarch and 3 tbsp of the milk and stir until combined with no lumps; set aside.

In a large saucepan place the remaining milk, cream, evaporated milk and sugar and bring to the boil. Boil for four minutes and then turn off the heat and whisk in 2 tbsp of the espresso powder. Taste and add more to suit your palate, remembering that when the ice cream is frozen, the flavours will be slightly dulled.

Place the pan back on the heat, and whisk in the cornstarch mixture, and then continue to heat, stirring, until the mixture thickens slightly. Remove from the heat and slowly incorporate the coffee base into the cream cheese mixture with a whisk. Place the combined ice cream base into the fridge until it is completely chilled (at least two hours) and then churn in your ice cream machine, according to the manufacturer’s instructions. YUM!