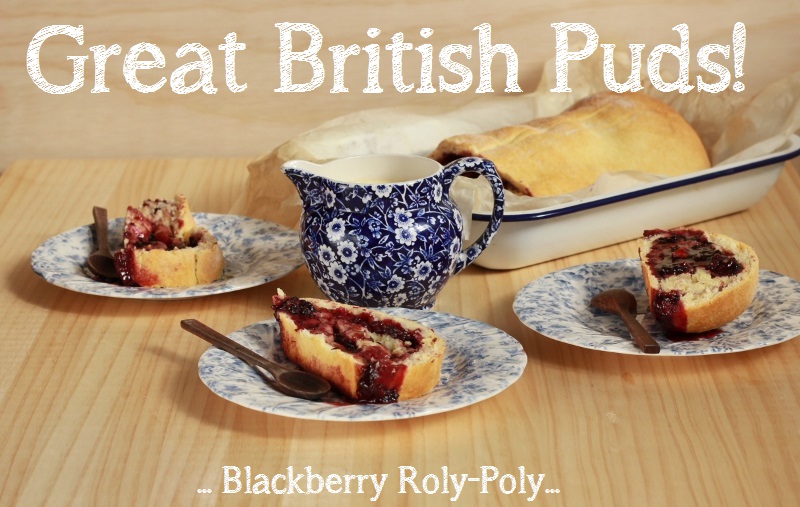 Oooooohhhhhh. That’s the sound I make whenever anyone talks about good old British puddings. It’s coupled with this weird squinty eyes/pursed lips/hand rubbing gesture. It doesn’t sound attractive, but when you see it…actually, you know what? It might be pretty unattractive.

But I can’t help myself! I absolutely adore a lovely rib-sticking pudding, preferably flooded in custard. There’s nothing like the feeling of cozying up on the couch with a snuggly blanket, someone you love and a bowl of something sweet, buttery and delicious. 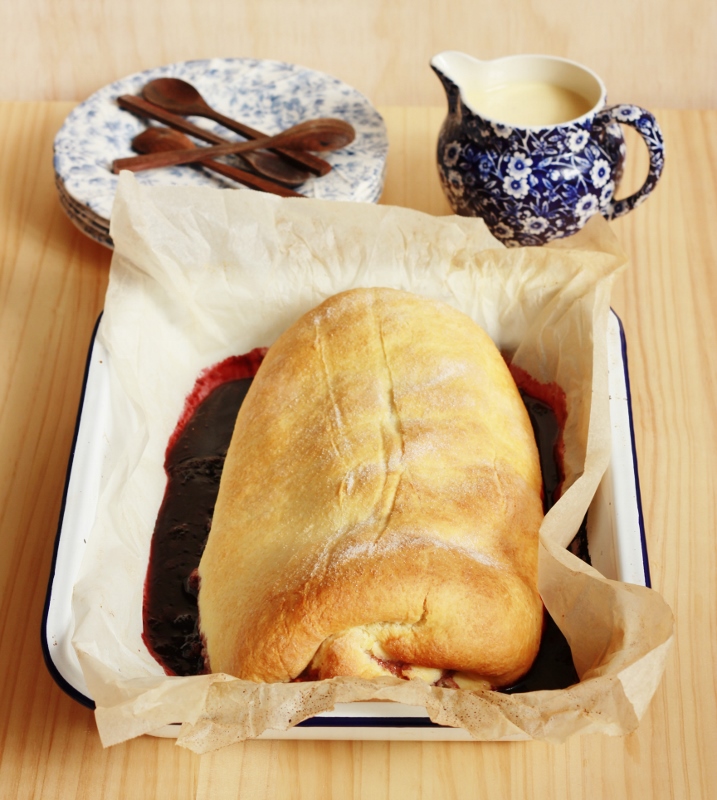 This is my modern spin on a VERY traditional British pud, the Roly Poly. Never heard of it? Well, it’s not super common these days, especially if you’re not from the UK. I have no idea how common it is over there, but there aren’t that many recipes kicking around, so I think it’s pretty old school.

The Roly Poly is traditionally steamed and the dough is made with suet, which is a type of animal fat. I…couldn’t get my head around suet. So I made mine with my friend and yours; butter. I also declined to steam my pudding, though I don’t think that’s unheard of in traditional kitchens – not everyone has a crazy fish-kettle (totally I wish I did)! 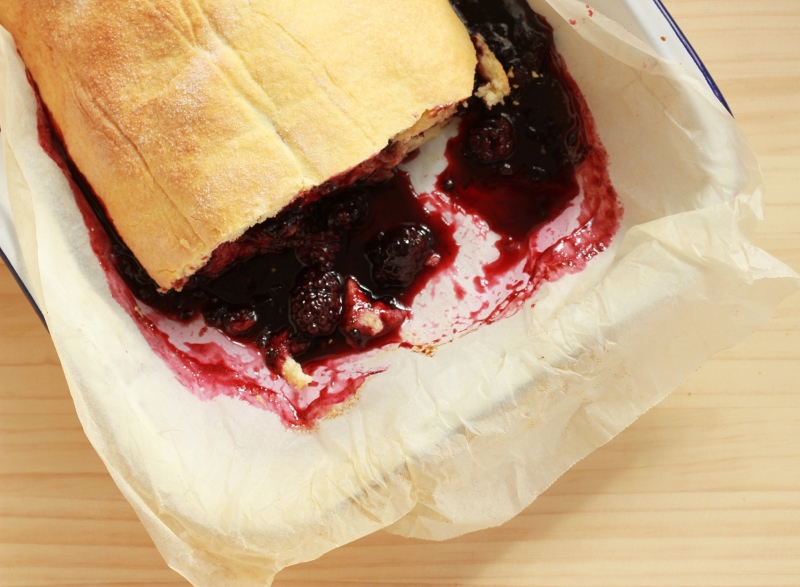 The other thing that takes this pudding back in time is the blackberry jam filling. A major amount of jam went into this puppy. It’s a celebration of jam! And of course, I stirred in some beautifully glistening fresh blackberries too. There is something about the almost-black purplishness of blackberries that I find irresistible. They are a truly seductive berry.

This pudding makes a total star out of blackberries. It’s like taking a blackberry pie and rolling it up into a log, only imagine that the pastry has puffed up into something halfway between shortbread and cake, and the blackberry filling is jammy and sweet and oozing. THEN my friend, you realise that only custard will do.

ONLY CUSTARD WILL DO. 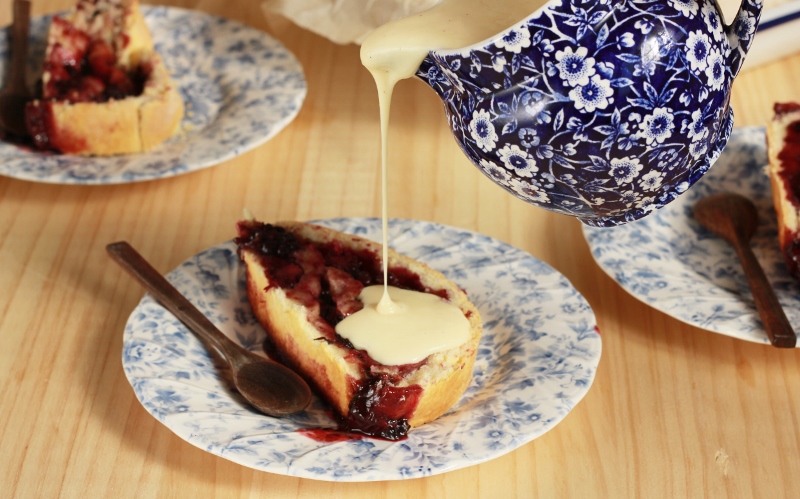 So you knock together my cheat’s custard. This is the custard for those times when you don’t have a whole fridge full of heavy cream and eggs. And really, for me, that is a lot of the time, because if they were in there…I would eat them. Here’s the cheat: condensed milk.

You take some condensed milk, regular milk (whatever you have), 2 eggs yolks, cornflour and a touch of vanilla. If you’re REALLY strapped, you can even leave out the egg yolks, they just bring a little richness and unctuousness to the custard, which is heavenly. It takes a total of 5 minutes to bring it all together, and the cornflour means that it’s really difficult to curdle it – not impossible! – but really difficult. 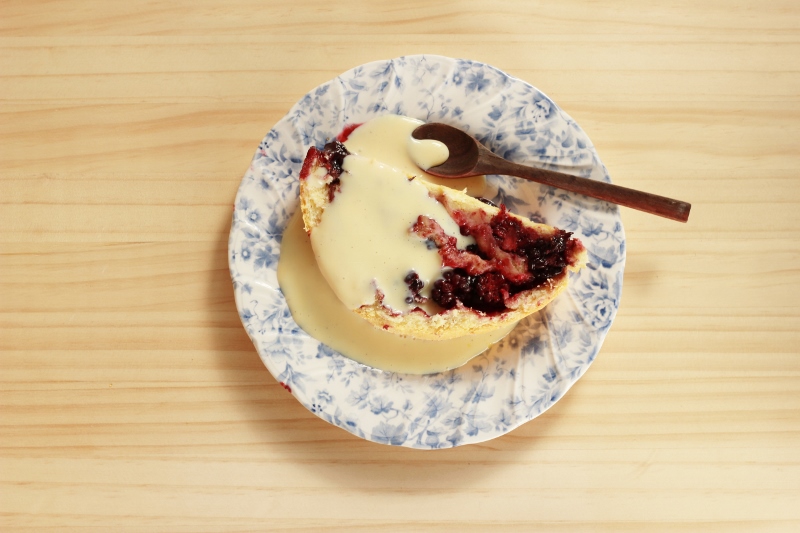 And that’s it. The pudding comes together easily and then just hangs out in the oven, making your house smell divine. The custard comes together in no time flat. All that’s left is to hunt down that perfect couch-time cuddle partner. Be they man, woman, canine or animal, it really doesn’t matter. The important thing is that they’re there. Also that they have nice abs, and enjoy watching Seinfeld re-runs, but that’s a personal preference.

Adapted from Jamie Oliver’s ‘Jamie’s Dinners’ 2004, a FANTASTIC BOOK, which I fully reccomend.

Preheat the oven to 180C. In a food processor or stand mixer, place the flour, baking powder and butter. Process in short bursts or mix on low speed until the mixture looks like breadcrumbs. With the processor or motor running, stream in the milk slowly, starting with about 2 thirds. Keep going until the mixture comes together in a very soft dough. Wrap in cling film and place in the fridge to rest for 30 minutes. Meanwhile combine the jam and blackberries in a small bowl (maybe add some lemon zest here? I didn’t have any).

Once the dough is rested, it’s time to roll it out. I recommend doing this on a big piece of baking paper. Sprinkle your baking paper with caster  sugar generously, and then place the dough on top. Roll out the dough into a large rectangle, about the size of a 9x12inch pan (33x22cm). leaving a 2 inch border along the two long sides and one end, slather the dough with the blackberry mixture. Fold in the two long edges and then starting from the short end with blackberries right to the edge, begin to roll the poly up confidently, but not too firmly. Place the rolled up pastry into a lined baking dish and place in the oven for 50 minutes. Serve it up with Cheat’s Custard!

In a medium bowl, combine the egg yolks, corn flour vanilla and condensed milk. Mix until well combined, and then stir in the milk. Pour the custard mixture into a heavy-based saucepan over a medium heat. Bring it slowly to an almost simmer, and stir with a whisk continuously until the mixture thickens. As soon as the custard is thick, it’s ready – serve it hot, cold or warm. Best cheat’s custard recipe in town, for sure.