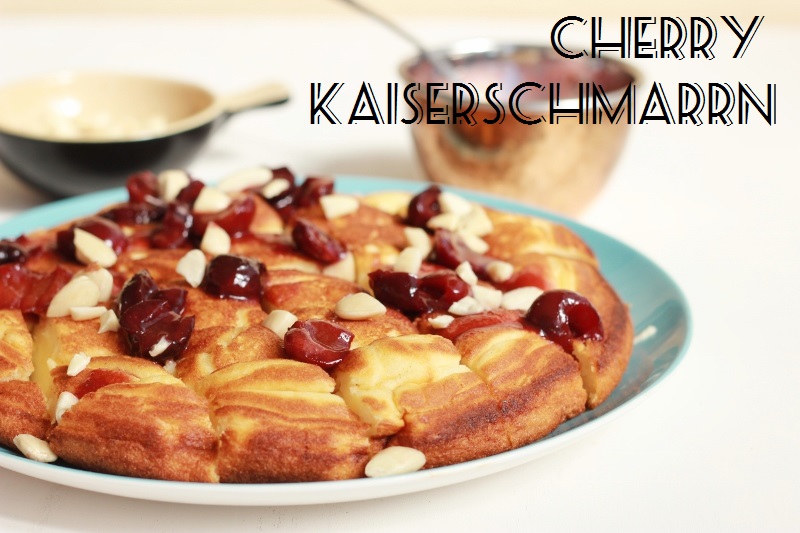 Oh my word, my lawd, my sweet puffy pancake. This one is special you guys. 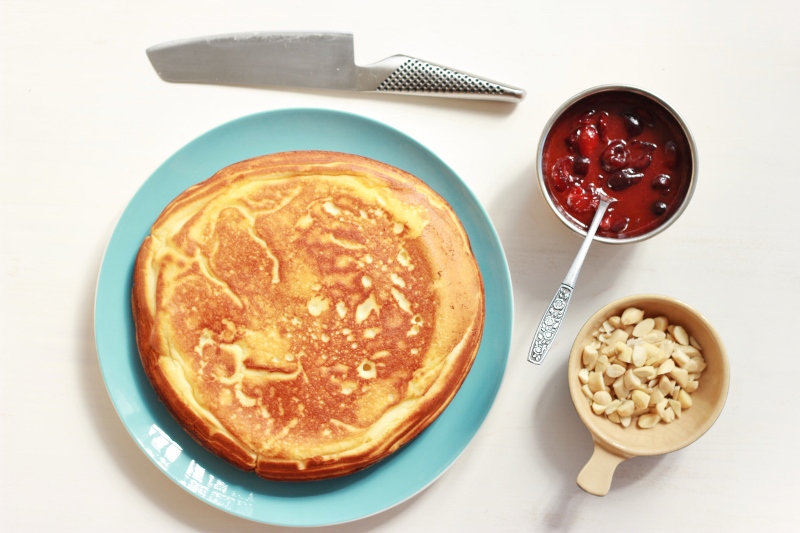 This is based on an Austrian recipe called Kaiserschmarrn, which I first read about in a book called Desserts by the Yard by Sherry Yard. She learned to cook the recipe when she was working under Wolfgang Puck, who is himself Austrian. So you know, I bet she makes a mean Kaiserschmarrn.

My Kaiserchmarrn isn’t really a traditional Kaiserchmarrn for many reasons. I totally simplified the recipe. Traditionally, the big puffy pancake is sort of chopped up and then scrambled in a pan with a pile of butter and sugar. Yes, I know, that sounds amazing, but what I was really aiming for here was something that would be easy enough to do that I could roll out of bed on a Sunday and manage it. Yeah, I’m pretty bad in the mornings. Hot butter and sugar and chopped up pancakes is not a situation I would embrace at that time…unless someone else does it. 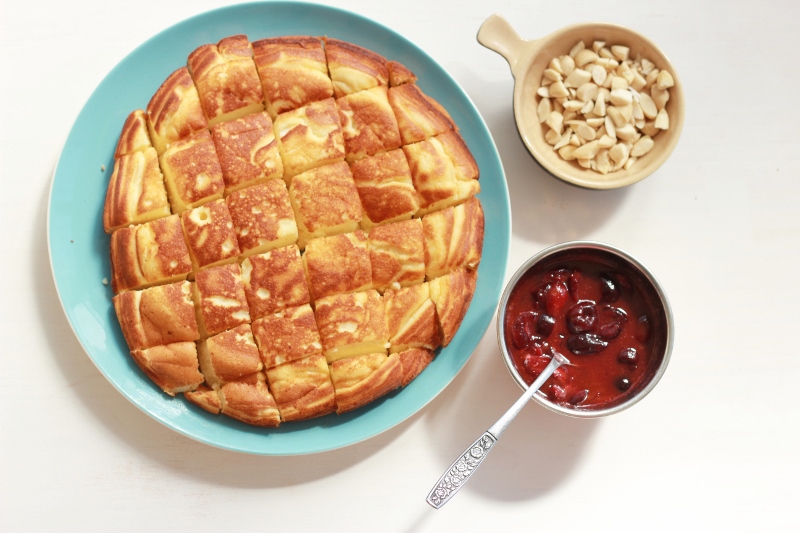 I also couldn’t help but think that once you put all the puff into this ginormous love puddle of a pancake, that it would be a real shame to lose that by caramelising it further. Stiffly whisked egg whites and a heaping teaspoon of baking powder are what gives this lemony-scented batter it’s lift, and it results in a breakfast of such lightness, you can see why the Emperor was so keen on this baby.

That’s right, Kaiserchmarrn was APPARENTLY beloved by an Emperor. It was SUPPOSEDLY invented for an Austrian Emperor’s wife, who must have been insane, because she did not eat it, and he hoovered it up in her wake. He loved it apparently, and thus was born this “Emperor’s little mess” or “Emperor’s nonsense”.

Poor, crazy Empress Elisabeth of The House of Wittelsbach. For she did not know what she was missing out on. Once your pancake has been whipped up, folded together and hung out in a pan for a few minutes, you slide it out onto a plate and then flip the sucker back into the pan. This large-scale pancake flip is the only deft motion that is required of the whole operation, and I am weirdly more equipped to do this than to flip small pancakes, which I frequently screw up.

From there you simply wield your trusty pizza cutter (or regular knife) and score this sucker into adorable little cubes. Once your puffy cubes are assembled, you douse them with this gorgeous compote of cardamom and cinnamon scented cherries, and then sprinkle over some chopped or flaked almonds. 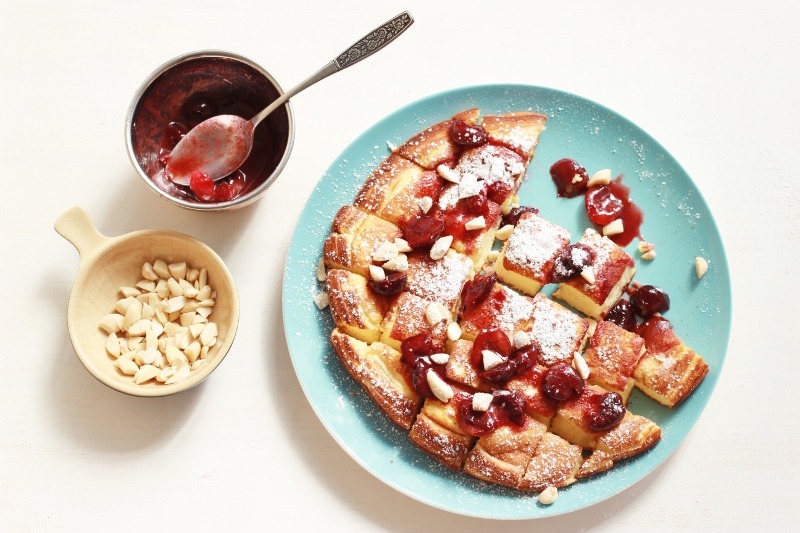 And then you make it RAIN with POWDERED SUGAR!!!

Because that is what makes brunch into a BRUNCH PARTY right?!?! Oh yeah, that and the presence of either an espresso based booze drink or some mimosas. Either way is totally fine. 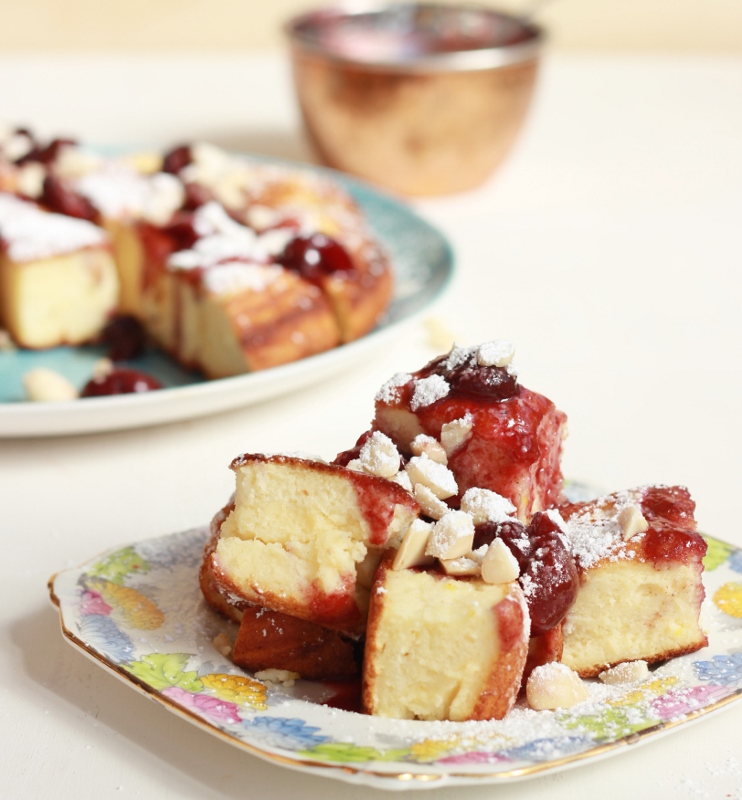 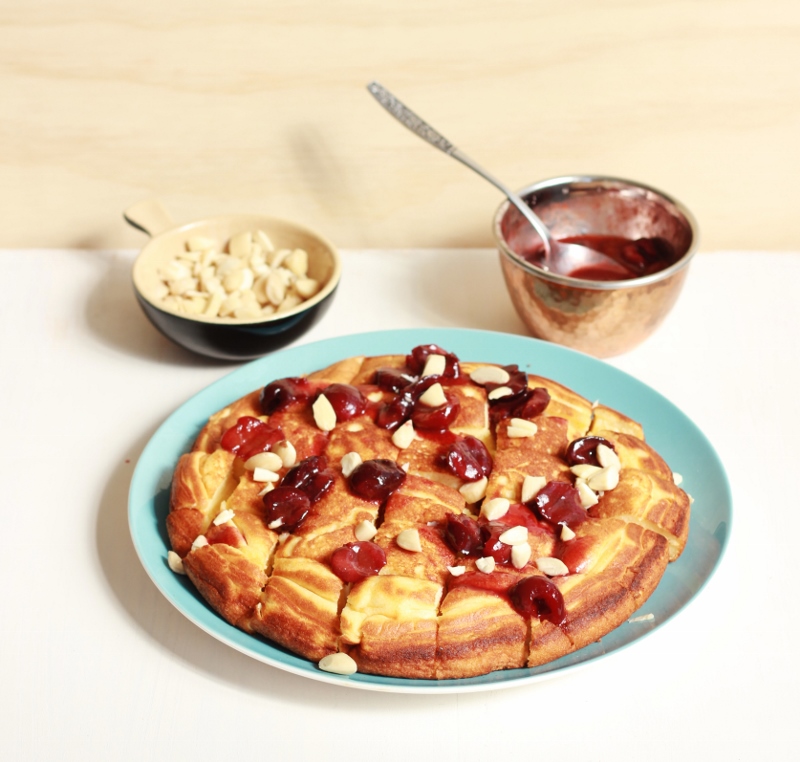 Make it. You’ll love it. I know you will.

Makes 1x25cm pancake, serves 3 greedy people, or up to 6 as part of a larger brunch.

In a large bowl combine the flour, milk, lemon zest, baking powder and egg yolks, whisking to make a smooth batter. In a separate bowl, whip the egg whites to soft peaks. Continue whipping, and gradually add the caster sugar until the egg whites form stiff, glossy peaks. Place a 25cm non-stick pan that has a lid on to a low heat, and place half the butter into the pan to melt. Once the butter is almost melted, quickly fold the egg whites into the batter until well combined. The butter should now be fully melted, so quickly pour the batter into the pan and place the lid on. The pancake will need around 4 minutes on the first side, it should be nicely browned on the bottom (use a spatula to peek), and setting on the top. Slide the pancake out onto a large flat plate, using your spatula to assist, and place the remaining butter into the pan. Let it melt and then drizzle the melted butter over the top of the pancake on the plate. Place the now empty skillet over the top of the pancake and flip the whole plate/pancake/skillet upside down, so the pancake is back in the skillet. BE CAREFUL. The second side will need another 3 and a half minutes, and then your done. Slice it up, drizzle on your cherry compote, sprinkle your almonds and make it rain.

Slice your cherries in half. Place the butter in a small pan to melt. Toss in the spices, followed by the cherries, and a few spoonfuls of sugar. I recommend tasting the cherries first, to see how tart they are, and adding sugar as you go. Too tart is better than too sweet, in my opiniong (see above re: making it rain with sugar). Simmer the cherries until they are syrupy and just collapsing.