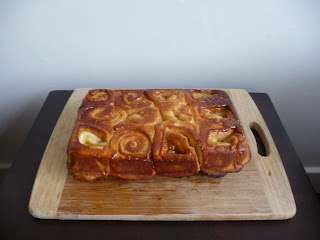 I may have mentioned it before, but am too lazy to go back and check for real, that I have an abiding penchant for all things American. And that’s United States of American, to be precise. So for me, although I have indeed grown up in sunny Brisbane for some 20 odd years, I have a strangely nostalgic pull towards Americana. Can I pause here to say that someone is hammering in the background as I write this? Cannot WAIT to move into the new townhouse!!! That’s right folks, it shares no walls! So exciting! Completely free-standing and not a sole to hammer anything unless they are at least 4 metres away from my wall, my sweet, freestanding solid brick wall! But I digress… 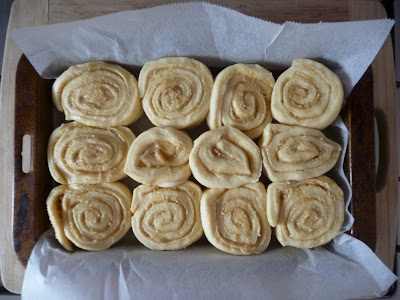 The real topic of conversation here is my completely unfounded yen for all things American, and especially that southern twang, down home, white picket fence type of thang. Where the women all dress like they’re out of Mad Men, and the men are as handsome as that guy out of Mad Men, and they are always baking something; which brings me to these cinnamon buns. These are prime candidates for Americana, and they have such a comforting homey aroma, even for the people out there who don’t long to live in the 50’s like me. They taste just as amazing as they smell, and there is seriously no bad time to eat these. I adore them, and so do all who are lucky enough to prise one out of the grasp of the Guitar Man (my partner). He adores them, and I have somehow tricked him into thinking that only I can supply him with them. The system works.
These are a great candidate for an early to mid morning munch. They are not so sweet and sugary that you feel ridiculous eating them for breakfast. In fact, alongside a milky cup of strong tea or coffee, these are the breakfast of lazy champions. There is nothing better, come to mention it, than the smell of these first thing in the morning. if you are thinking of selling your house you should have a batch of these in the oven when the people come to inspect. Resistance is futile. Bow down to the cinnamon bun. 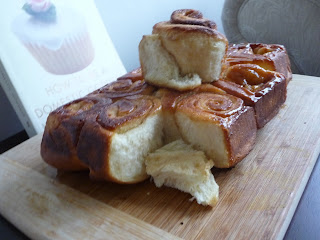 ?I am not going to lie, this is no slap dash recipe. When there is yeast involved you know that there will be some waiting around, some kneading and some more waiting. But rushing about is not in the spirit of these buns anyway. If you don’t have time to make them, don’t! Make some muffins instead, as if house guests or loved ones wouldn’t be just as happy waking up to a batch of cinnamon scented muffins (recipe to come). Just don’t mention the buns while you’re eating. Take heart in the fact that I have been making these by hand for ages, and even my laziest efforts at kneading have still produced light buttery buns. So when you do have a lazy weekend I seriously reccomend giving these a go. You can even do most of the steps the night before, put the filled and rolled buns in the fridge and then all you need to do in the morning is switch the oven on, let these come to room temperature (15 minutes here is Brisvegas, closer to an hour if it’s very cold where you are) and then whap them in the oven till golden brown and gorgeous. They will throw rose petals before your feet, I swear. I would if you made me these for breakfast. P.S. am also working on a version of these that any self respecting person would be horrified to eat for breakfast. Stay tuned… so gooey. 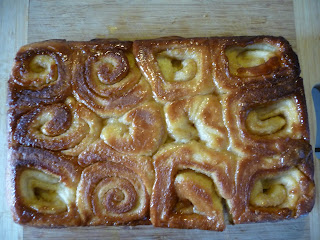 Let me apologise also for my shameful lack of bloggery over the past few weeks, I can only say that I have missed having a constant supply of sugar hits in the house more than you could possibly know, and will endeavour never to let it happen again. Now, bake on!
Recipe adapted from Nigella Lawson’s How to Be a Domestic Goddess.
Makes 12
Ingredients:
300 grams/2 cups strong bread flour 1 egg
100g caster sugar 1 tsp vanilla extract
7g/1 sachet dried yeast 25g brown sugar
130g butter 25g ground almonds
200ml milk 2 tsps ground cinnamon
Combine the flour, 50g of the caster sugar and the yeast in a large bowl. Melt 50g of the butter and whisk it together with the milk and egg. I find the easiest way to do this is to use a Pyrex jug into which you measure your milk, then add the butter and nuke it in the microwave until it’s just melted. After that you can whisk in your egg and the vanilla, but make sure that the liquid is not so hot that the egg will begin to cook; you should be able to put your finger in the liquid quite comfortably.
Now, simply add your jug of milk, butter, egg and vanilla to the flour mixture stir together until you get a lumpy floury mess; I usually use the same fork to whisk in my eggs, as I do to stir the dough together. Once you’ve reached this stage you can set the bowl aside and sprinkle some flour onto your bench and then tip out your dough and start to knead.
Kneading is a simple process, first you’ll have to just try and get the dough to come together, by pressing it, and squashing it into a lump. Then you can start to push the far edge of the lump away from you and then roll and pull it back, turn the dough and push and pull it again. After about 5 minutes of this, the dough will start to feel smoother and springier, and it will stop sticking to the bench.
If you’re dough is still sticking to the bench, or it was very sticky from the beginning, sprinkle some more flour on and just keep going, adding more flour if you feel you need it to get a soft, smooth dough. After about 10 minutes of kneading (or around three Bon Jovi songs, as I like to measure it) you can pop your ball of dough into a buttered bowl and cover the bowl with cling wrap. Then you just need to let it hang around in a warmish place for about 40 mins, or until doubled in size.
When your dough has around 10 mins left, turn the oven on to 180C, and get out your remaining butter and caster sugar, the brown sugar ground almonds and cinnamon and wurr them all together in an electric mixer. Then, when the dough has finished doubling, bash it down, knock it around a bit and then roll it our, on a floured bench to a square about 25x25cm. Slather them cinnamon filling all over the square, right to the edges, and then roll it up, quite tightly, beginning with the side closest to you.
Cut the log into 12 equal scrolls, with a sharp knife, and then lay them out either on a lined baking tray, or in a greased and lined brownie tin, about 15x25cm. (The brownie tin idea is good if you’re planning on travelling with these puppies. Also this is when you would double cling wrap and stick them in the fridge overnight if you wanted to bake them in the morning.) Then slide them into your pre-heated oven and bake for 15-20 mins. Voila!
Note: I use dried yeast in all of my recipes, because I find it the most widely available, and easy to use. But, by all means use fresh yeast if you can get a hold of it. Simply use twice the amount, and proceed in the same way.
Tags from the story
bread, bun, cinnamon, yeast
1
Facebook Twitter Pinterest
Google + LinkedIn Email
Written By
sarah
See More