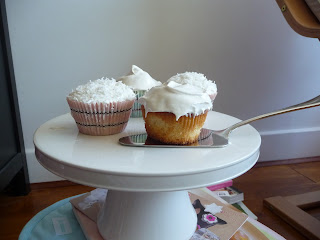 FOR THE RECORD…I made these the day before that episode of Junior Masterchef aired. Yes I am aware that few of you reading will have any idea what it is that I am referring to, so let me wind back a little. These cupcakes were made on the occasion of my partner’s sister’s birthday. It also happened to be the celebration of his lovely Nan’s birthday as well. I am lucky enough to have a defacto extended family who are gorgeous and friendly and large in number, and we were celebrating with a BBQ, pool style outing on beautiful Bribie Island. Idyllic, no? I am secretly and now publicly thrilled to have so many people to cook for. The time is long passed where I can justify making cupcakes for no real reason – my jeans have begun to protest – and my partner doesn’t like cake. I know, I know, but we’ll talk about it another time. 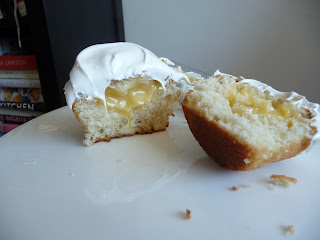 So anyway literally the night that I had finished these cakes and had them all packed away in the fridge ready to go, I am watching my Junior Masterchef, just like a lame version of actual Masterchef, but way better than anything else on TV, and what do I see, but one of the kids be making some cupcakes! Oh, ok, I think, that’s cool. Kids, cupcakes, I can see what’s going on here. But then it turned sour. Lemon curd? Lemon cake? Meringue? Damn, that kid stole my cupcakes! Oh well, luckily for me there were no avid Junior Masterchef followers at the shindig the next day(or anywhere?), or if they were they were nice enough not bring it up. Bless them. Anyway, my version is different to the TV version. I used a simple vanilla cake recipe, no lemon. I used a really tart lemon curd recipe with juice and zest, and I used what Americans call a Seven Minute Frosting. I think of it as a Marshmallow topping, because that’s kind of what it tastes like. I make mine with golden syrup and maple syrup, so it has some depth of flavour, but ultimately it is just marshmallowy meringue whip. Word of warning: it is sticky. It never stops being sticky. If you have small children (or male partner) may I suggest a wet wipe. 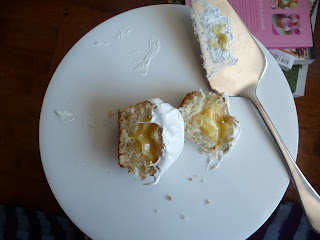 Truly though, these are yummy yummy cupcakes. Everything a cupcake should be, they are tall, loaded with icing, gooey filling, never a dry or dull moment. I hate the whole cupcake craze going around because honestly, I don’t think I have ever bought a cupcake that I enjoyed. They always look great, but then the icing is hard or just tastes like pure sugar, or the cake is like cardboard, or just dry spongey boringness. What I want when I eat a cupcake is the full experience – like some Alice in Wonderland stuff! I want it to look amazing, but also to be delicious, I want a surprise in the middle, and I want there to be an element of magic around, even a bit of mystery. I love when people bite in and get the marsmallowyness all over their faces and fingers, and then they hit the middle and get the tart, cool lemony filling, surrounded by butter yummy cupcake. Perfect summer’s BBQ dessert. MMM! I sound crazed, but I have always loved Willy Wonka and feel myself slipping further and further into his brand of madness magic. I mean the Gene Wilder/Roald Dahl Willy Wonka, by the way. Johnny Depp – I have always loved you, but I found your Mister Wonka a little frightening.
The Sugar Hit – calling it like I see it since 2010. 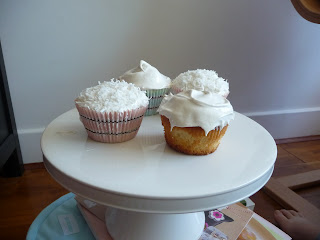 Anyway, I have not given a recipe here for the cake or curd sections of this confection, because store bought lemon curd will do just fine, and any old vanilla-y cupcake will do. I was happy with this one at the time, but now that I think about it…it could have been lighter. I will work on it and keep you posted. The real clincher on the cupcake front here is this icing. SWEET SUGAR, the icing. I tell you, a lighter, more ethereal, more beautiful icing you ain’t never seen. So I set it forth here in type, that it may bring joy to many more than just my greedy self. I also reccomend colouring it, because it gets the most amazing, beautiful metallic shine. Pearlescent, I want to say. Anyhoo, in the States they call this a Seven Minute Frosting, though I have adapted my recipe from a favourite Nigella Book of mine, FEAST. So, if this one deosn’t work for you, that’s what you should google, although I have to say this is the easiest version I’ve found.
Seven Minute Frosting adapted from FEAST by Nigella Lawson Chatto & Windus, 2001.
Makes enough for about 12 super iced cakes, or 18 regular ones.
Ingredients:
2 egg whites
2 tbsp Golden Syrup
2tbsp Maple Syrup
100g caster sugar
1/4 tsp salt
1/4 tsp cream of tartar
1 tsp vanilla bean paste
In a big, capaciously bowled bowl, make a double-boiler over a saucepan of barely simmering water, and put all of the ingredients except for the vanilla, into the bowl. Whisk everything with an electric beater until the icing becomes thick and holds peaks like a meringue. This will take about 7 minutes, so be patient.
Take the bowl off the saucepan and on to a cool surface and keep whisking while you add the vanilla. Then keep whisking until the mixture cools a little. This icing will set somewhat as it cools, so as soon as it is at room temperature or just above you need to star icing, not frantically, but with brisk and competent efficiency. Enjoy the looks of surprise and delight when you usher forth from the kitchen some treats of picture book perfection, because no matter what you do with this icing you cannot go wrong. It is glossy, impressive, beautiful and delicious.
Tags from the story
blog, cupcakes, curd, frosting, lemon, picnic, sweets
0
Facebook Twitter Pinterest
Google + LinkedIn Email
Written By
sarah
See More