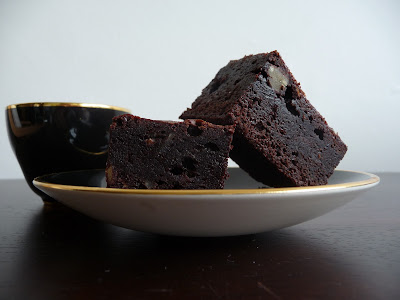 I have mucho love for the brownie. According to Classic Home Desserts by Richard Sax, a fantastic book which manages to be informative and comforting at the same time, the brownie came into popular being aroung the beginning of the 20th Century. The first mention of a brownie was in a Seers Roebuck catalogue (can anyone tell me what that is? I want to say – the American version of Myers?) and after that recipes began cropping up in other home journal type publications.
Facts aside, I have to say that I have some issues with the way this humble brown confection has been treated. You can walk into almost any cafe/coffee place and get a rock-hard, ice-cold sqaure of brown-ness, coated in icing sugar and tasting of paste. Not so appetizing. The brownie of my memory is a different thing all together… 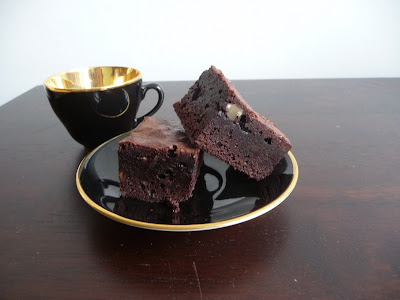 To my mind, there are four important layers to a brownie. The bottom layer should be a bit cake-like, and sturdy enough to hold up the next layer; a pocket of choclate-rich barely cooked goodness, studded with nuts or chips. On top of that another slightly cakey layer, and then to cap it all off, the dull, crackly topping, which is the universal sign of the Good Brownie. I tend to think that a lot of people mis-use the brownie. It is an incredibly easy thing to make, as you will see in the recipe below. A total one-pan treat, and yet so often made into a complicated big deal, with sifting, and creaming and melting and then flouring and dusting and bain marie’s. Not necessary people.
I have tried it all. I always though the best brownie must be made with melted chocolate. I always thought the path to a lighter brownie must be by way of whipping, or a water bath. I was wrong. The brownie you see pictured below… 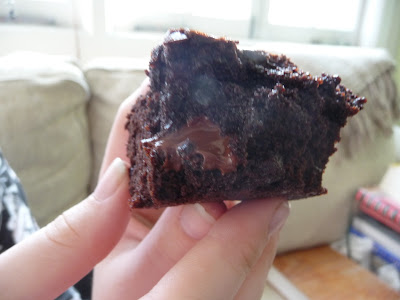 …does not even have melted chocolate in the mix, though obviously there is a big piece of chocolate that I stirred through which melted obligingly for this particular shot. They are a dead simple cocoa-based brownie mixture. They have so far lived up to every brownie task I have set them, and then some! Are they good straight out of the oven warm? Hells yeah, see the above photo. Are they fantastic heated in the microwave, with some of the brown sugar ice-cream left over from here? You’re darn right they are. Now for the true test of the brownie, because this is the main beef that I have with all those $6 brownies that you get from cafes – what is it like cold? Wellll….. Let’s be honest, a cold brownie, where all the butter and chocolate have had a chance to get hard in the fridge, is never going to be what a warm brownie is. BUT these ones do a pretty good job. They manage somehow to retain a fraction of their gooeyness, probably due to the fact that there is no chocolate in the batter (did I mention that already?) so when you have the needbrownienow-notimetowait moment, you can rest assured that you will not be disappointed. 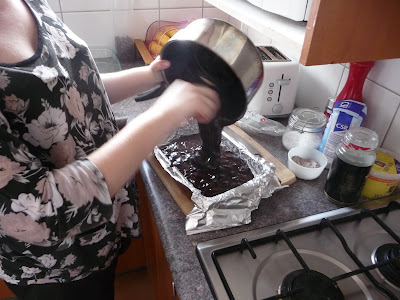 a glimpse into the tiny sugar hit kitchen…
And so, without further ado I give you the only brownie recipe you will ever need. Surprise,surprise – it’s a Nigella. Oh, did I not mention that she is my idol? Keep reading the blog everyone, it’s sure to come up. ;)
Cocoa Brownies
adapted from Nigella Lawson’s Nigella Kitchen (Chatto &Windus, 2010)
Makes 25
Ingredients
150g Salted Butter
300g Brown Sugar
75g Best Quality Dutch Process Cocoa Powder
150g Plain Flour
1 tsp Bicarbonate Soda
4 eggs
1 tsp Vanilla (essence, extract or paste)
approx 150g Milk, dark or white chocolate, chopped
1 large handful of nuts (pecans, walnuts, macadamias etc.) optional.
Preheat the oven to 180C fan-forced, and grease and line a 25cm square, or equivalently rectangular baking dish. Melt the butter in a large saucepan over a low heat.
Once the butter is melted, tip in the sugar, still on the heat, just until it is blended with the butter, not bubbling or anything. Sift into the pan the cocoa powder, flour and bicarb, still on the heat, and stir together until a dark, thick paste is formed. Remove from the heat.
Stirring vigourously with a wooden spoon, beat in the four eggs and the vanilla, until well combined, and then stir through your-mix-ins of choice.
Once combined, scrape into your prepared pan and bake for about 20-25 minutes, taking it out of the oven when it looks cooked but still has a wobble about it. Be brave and take it out before you think it’s ready. Now let it cool and cook on in the tin on a rack for about 15 minutes, and then cut yourself out a corner piece and enjoy. The first piece of brownie never comes out right, so make the sacrifice and have that one yourself. It’s a hard job – somebody’s gotta do it. Future generations might just remember you for this.
1
Facebook Twitter Pinterest
Google + LinkedIn Email
Written By
sarah
See More