SALT. Is there anything it can’t do? It brings out the sweetness of these peaches, and the fragrance of this vanilla like nothing else. Each bite is like sitting on an Italian beach, with the Mediterranean sun beating down on your neck, and salty sea-spray on your face. 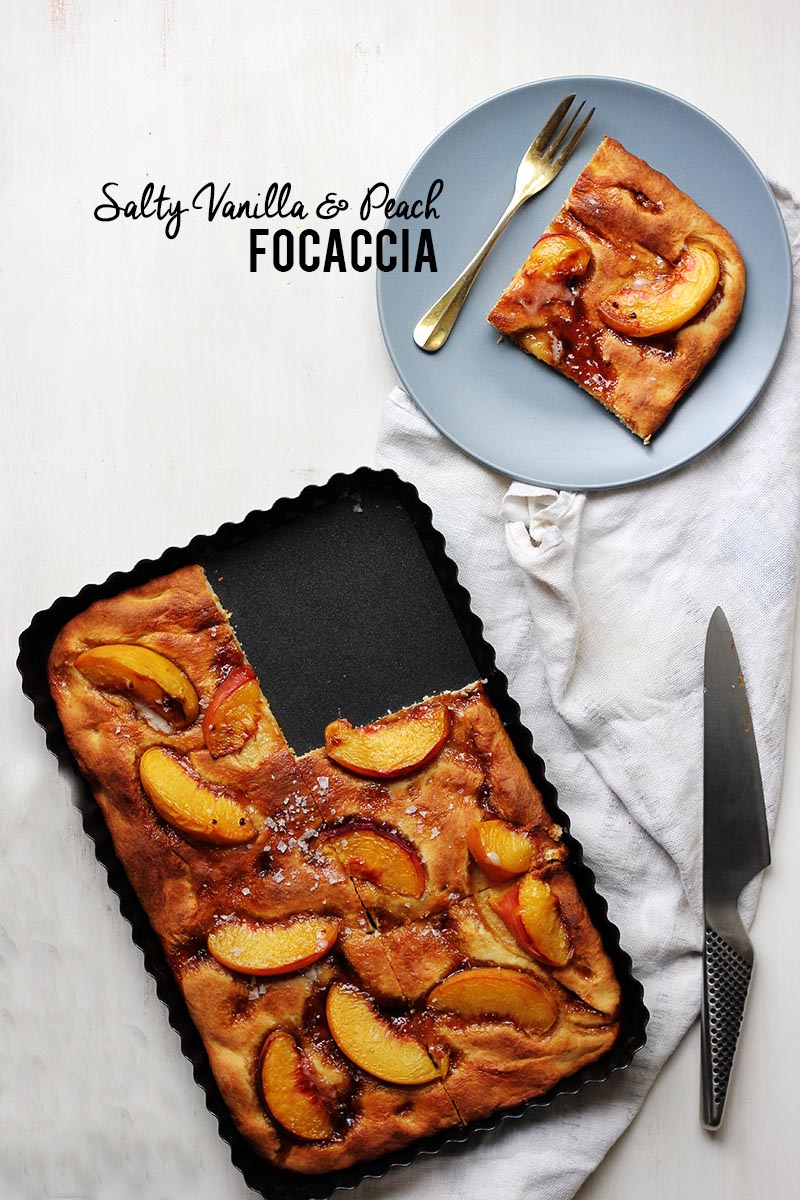 One of my favourite ways to deal with the heat (newsflash: I don’t love it) is to try and embrace a little holiday exoticism into my daily life. Somehow holiday-heat is so much more bearable than workday heat.

With this recipe I plucked a lemon from a lushly overflowing grove on the Amalfi coast, and added it to a sweet, buttery bread dough. I topped the whole thing with vanilla & maple soused peaches, and then gave it a final flurry of salt. The perfect thing to pack into a picnic basket, so that when you jump into your white 1964 Austin Healey covertible and drive the winding road down to the beach, you’ve got something to snack on. 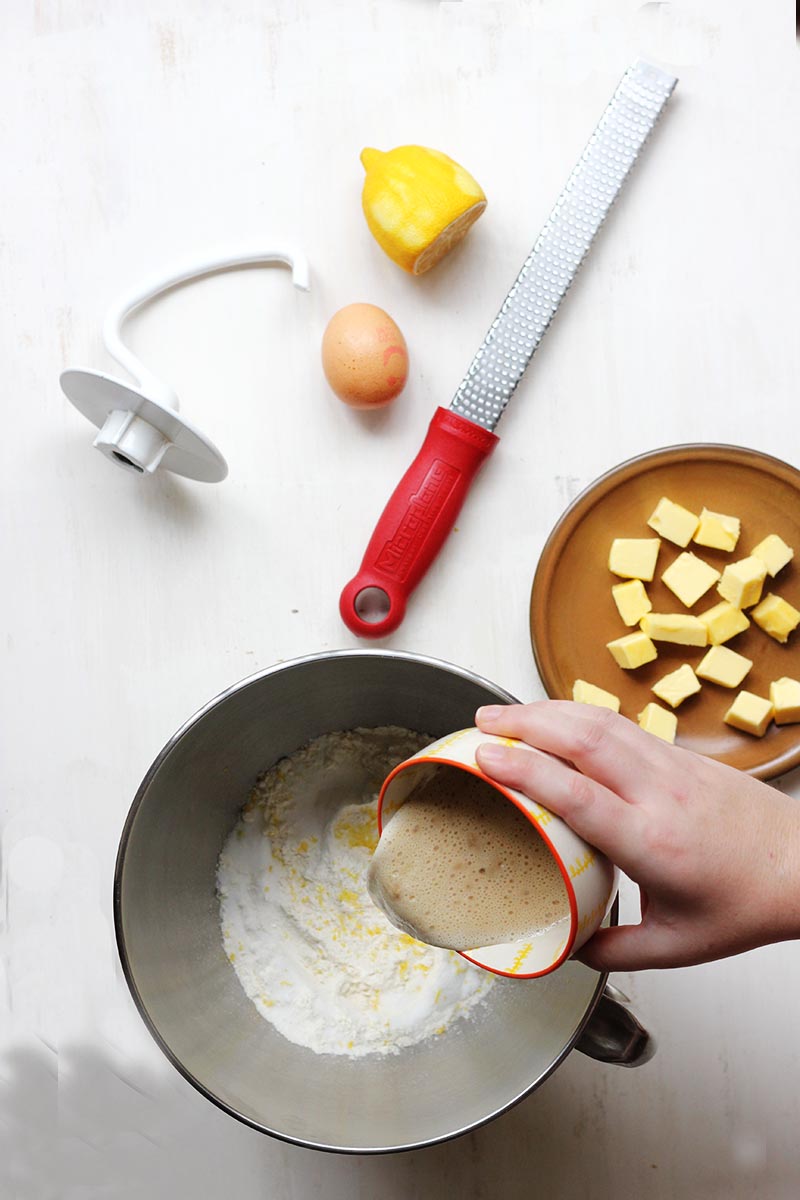 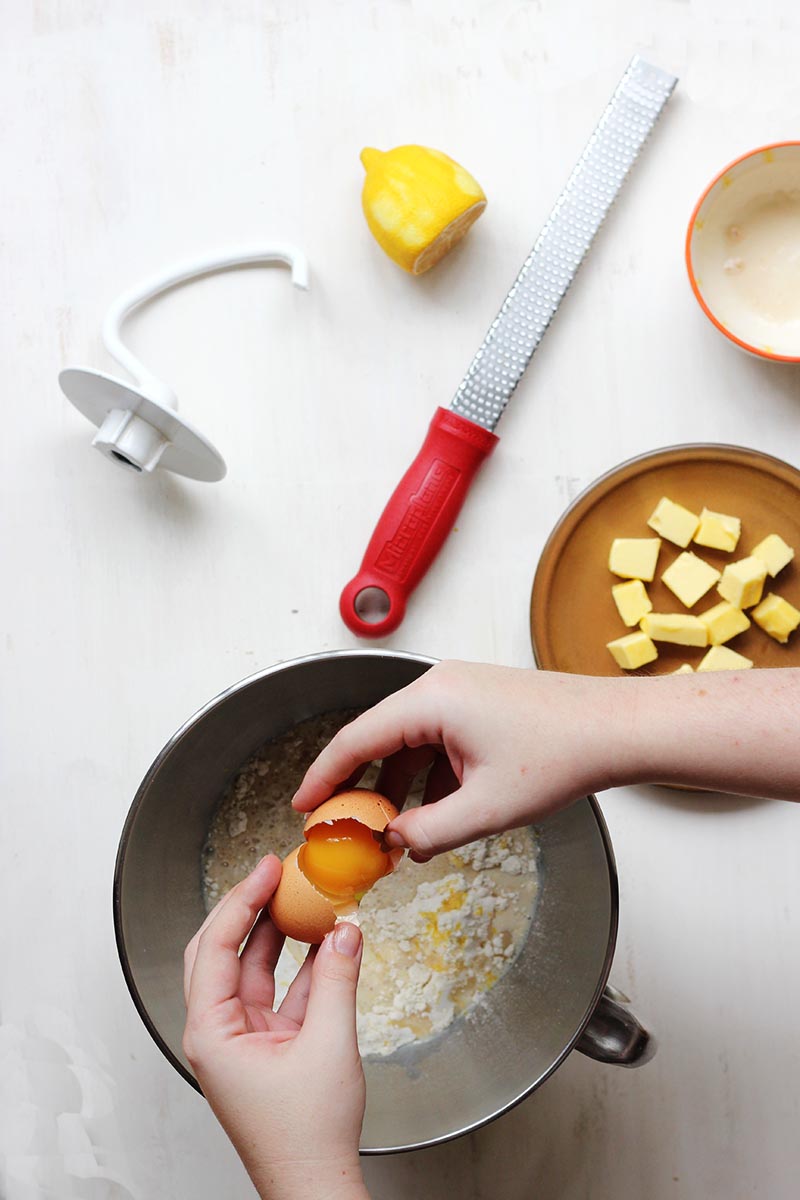 The dough is super simple. Warm milk, yeast and sugar hang out and get foamy, before being thrown in with the flour, remaining sugar and lemon zest and an egg.

The smell of that lemon zest? That is the smell of Italian baking to me. When I was 15 I went to Italy with my Mum, and every morning I would steal a little lemon-filled cake from the breakfast buffet, and stash it to eat later in the day. 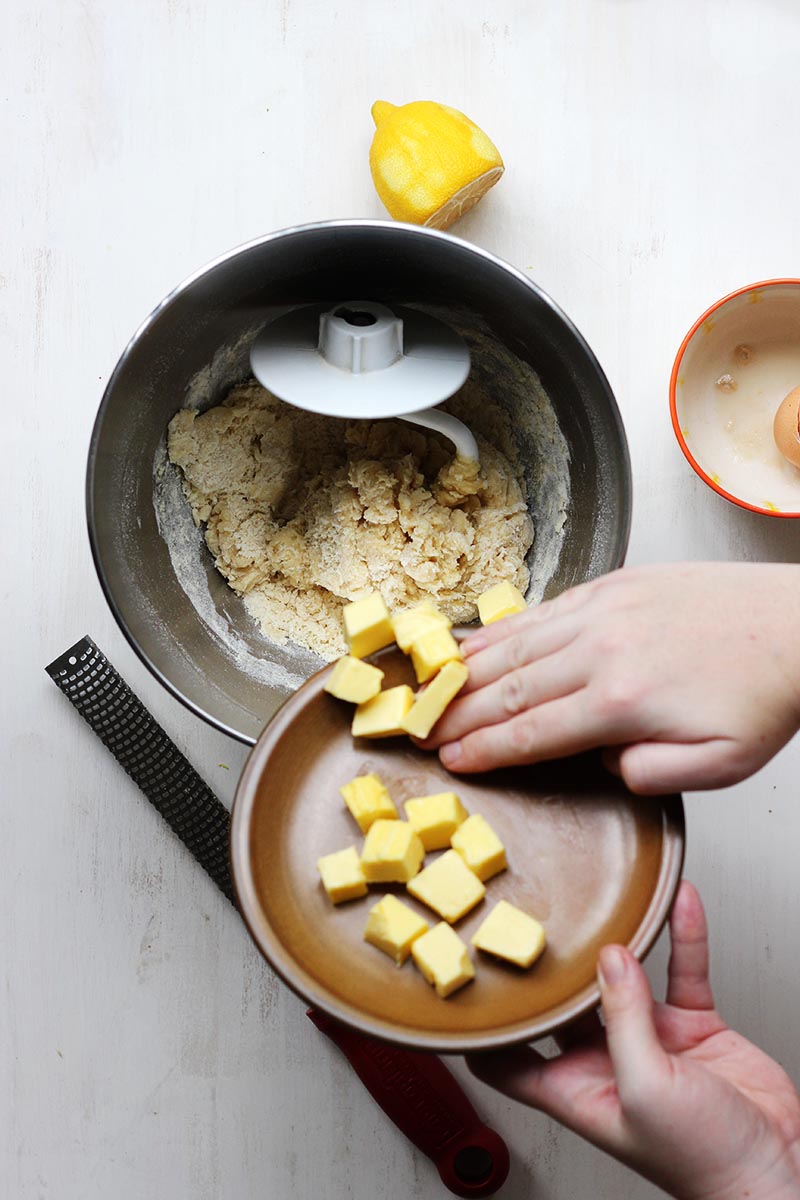 The dough gets worked on a low speed in your mixer for a little while, until it forms a very dry and shaggy looking heap. Then you can dump in all your softened butter, and keep working the dough on a low speed. Give it at least five minutes to come together in a smooth, buttery, silky ball.

Then you can go ahead and plonk that dough in a bowl and cover it with plastic. I don’t grease the bowl, I don’t flour the bowl, I don’t see the point. Just stick it in, wrap it and put it in a warm spot for an hour or two, until doubled in size. 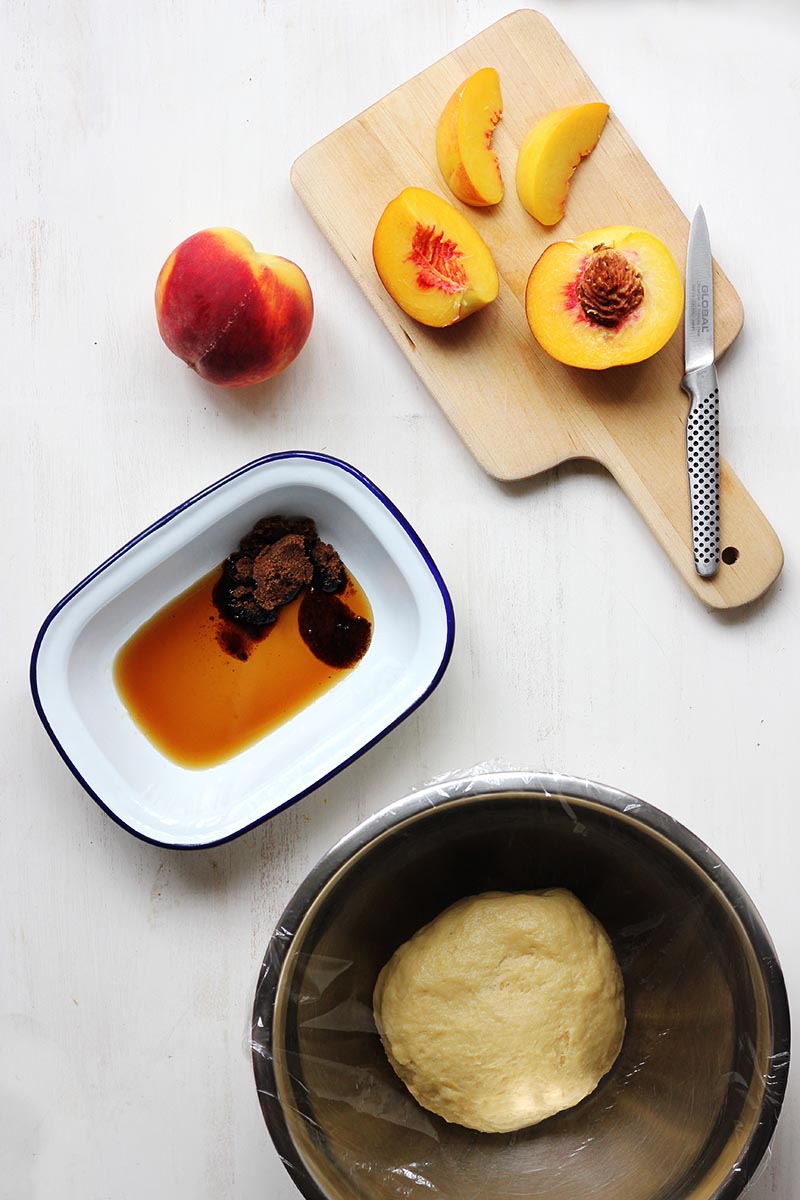 Meanwhile, take a beautifully rosy cheeked, gold-fleshed peach and slice it into twelve wedges. If you can’t get peaches where you are, then you can use cherries, an apple, blackberries, or even blueberries – fresh or frozen. This is a very forgiving recipe. 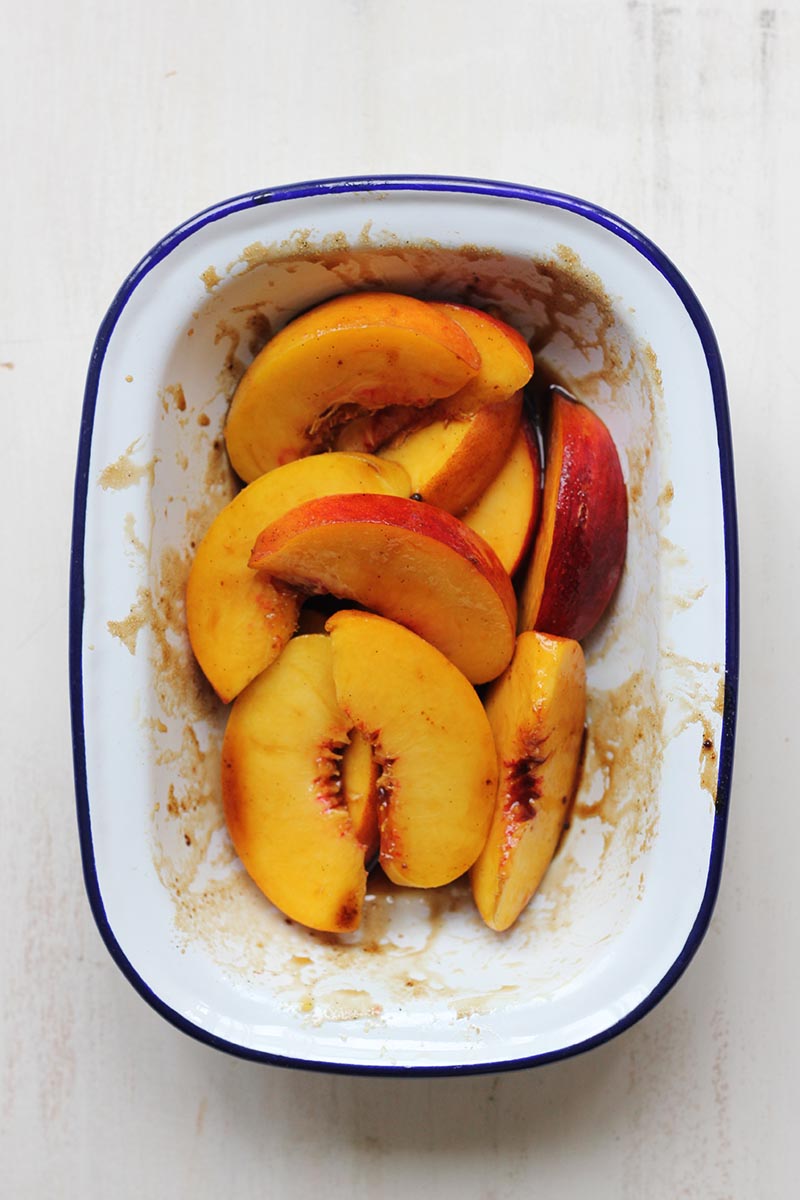 Give the peaches plenty of time to macerate in their syrupy bath – the more peachy syrup that comes out of them, the more there will be for the bread to suck up as it bakes, getting oh-so slightly crunchy and gooey in various places.

Once the dough has risen, it’s as easy as pressing it out into a vague rectangle shape, and then pouring over the peach juice, and studding on those peach pieces. Then drape it with plastic and leave in a warm spot to double in size again. 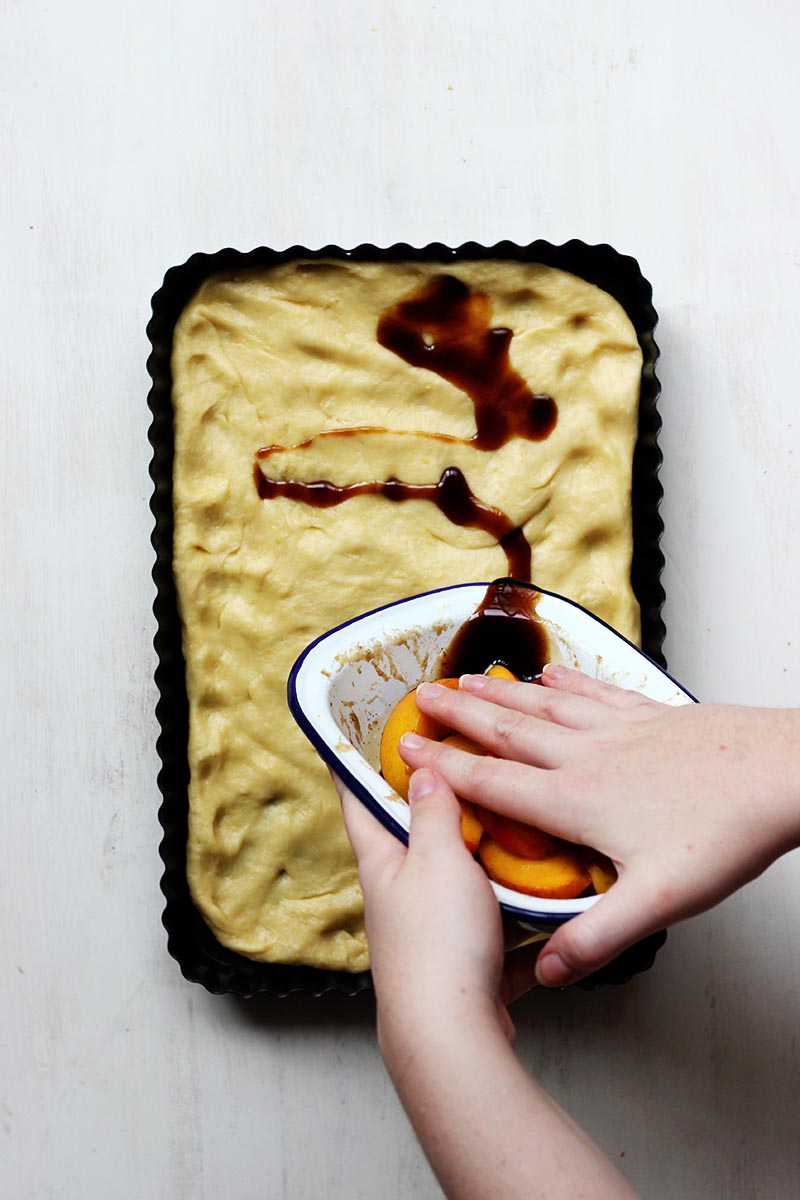 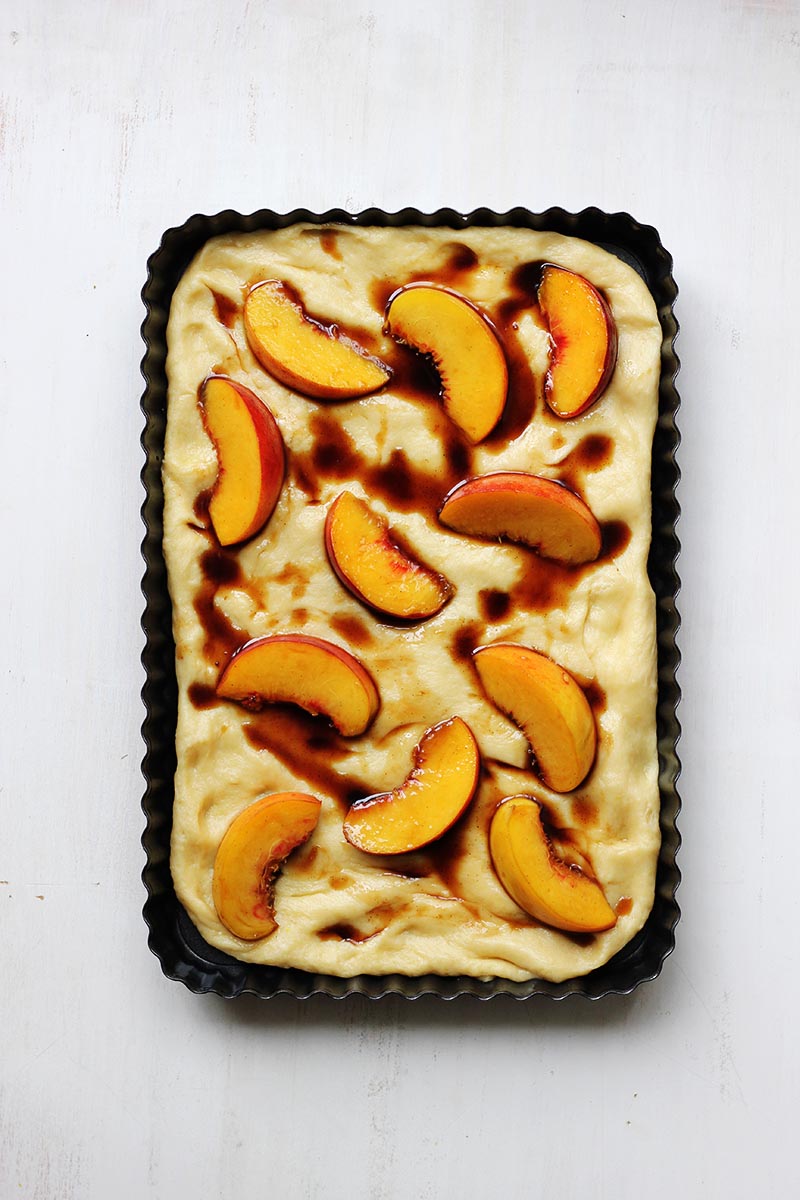 The smells of lemon zest, baking bread, vanilla and roasting peaches are all in the top 10 greatest smells of all time. If you subscribe the Cher Horowitz theory that you should always bake something when a boy is in the house, then don’t bake this unless you want a marriage proposal.

Meanwhile, I’ll just be sitting here in the 35C/95F heat, sipping on strong black coffee, eating slab after slab of this salty-sweet focaccia, and trying to escape in my mind to Italy. And don’t skip that layer of flaky sea salt on the top of this bread. It’s where the magic happens.

P.S. Am I the only one who bakes to escape? Tell me I’m not alone in this. 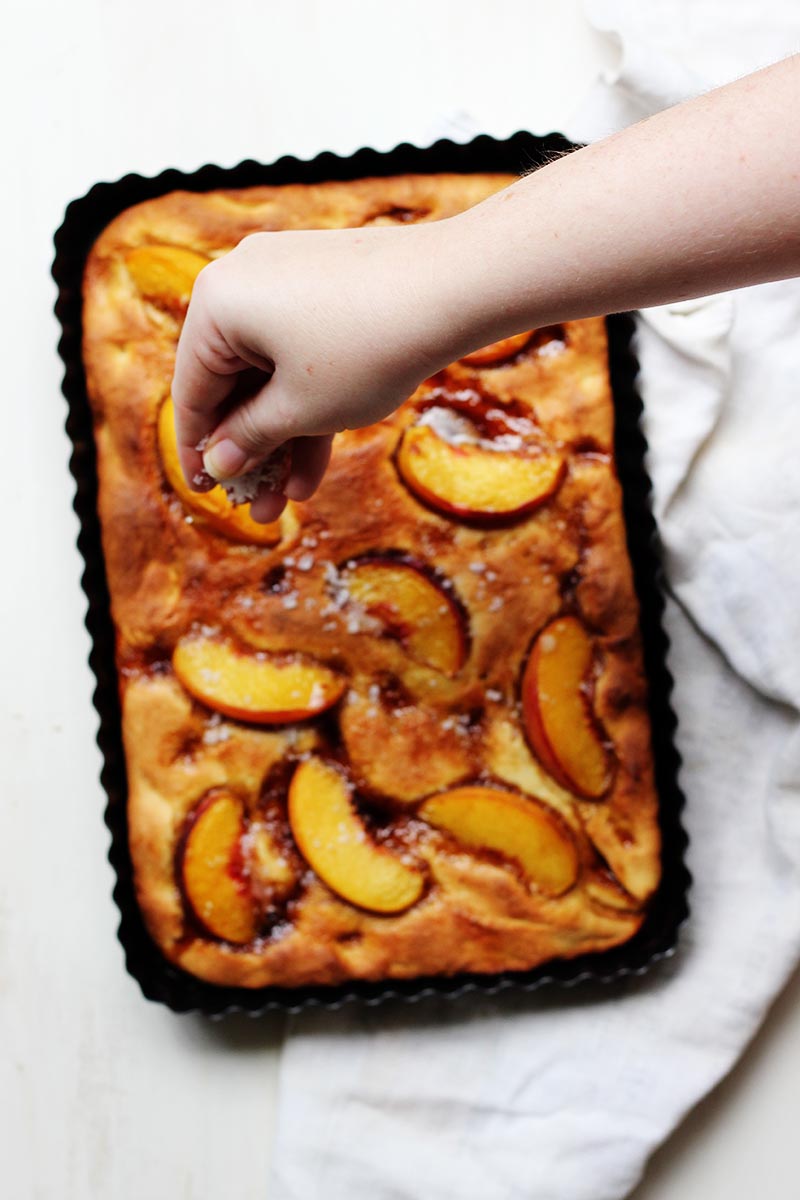