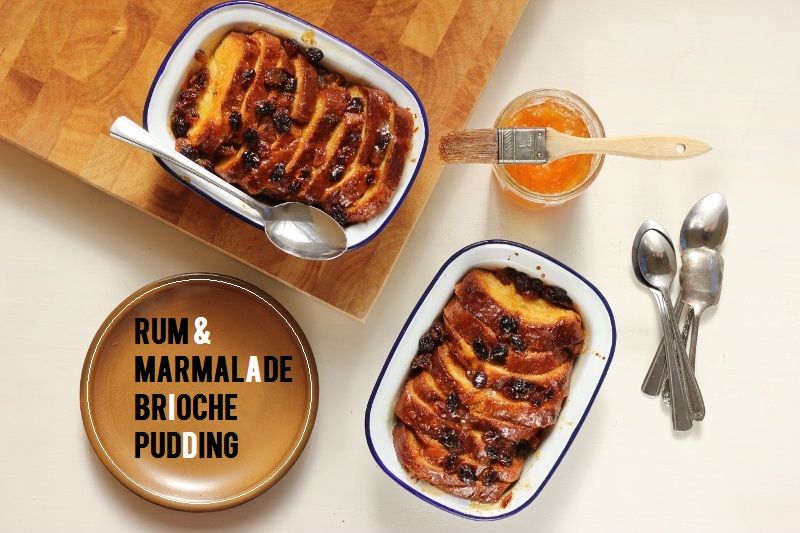 I have a real treat for you today  – this rum and marmalade brioche pudding is off-the-charts delicious. This dessert was inspired by a recent trip to Bundaberg, and I couldn’t help myself from boozing it up with the local spirit! Bundaberg has been a sugarcane growing region for forever, and it was so cool to be driving through the town and then have this sweet, almost buttery smell of hot sugar wafting through the air. And one of the neat by-products of sugar-cane production is Rum! 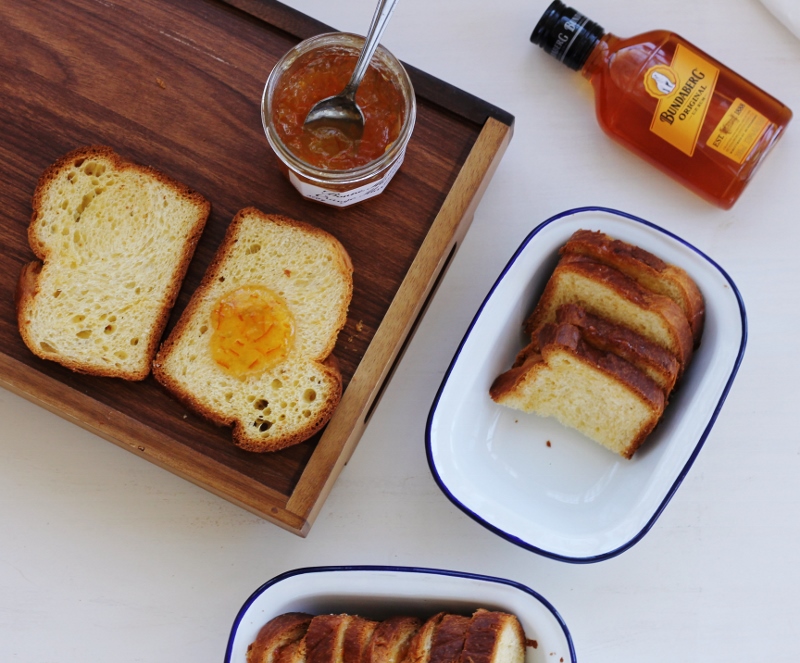 Rum and marmalade is a surprisingly awesome combo. The bitterness of the orange marmalade is tempered by the deep sweetness of the rum. Both oranges and rum are from traditionally hot climates, and were both favoured by the British at one point or another in history. So they have heaps in common.

Famously, British sailors were given a “tot” of rum each during the 1800s. I wonder if any of them considered mixing it with a little marmalade and having it on toast? Brits love toast, right? Well, hot dayum, so do I! 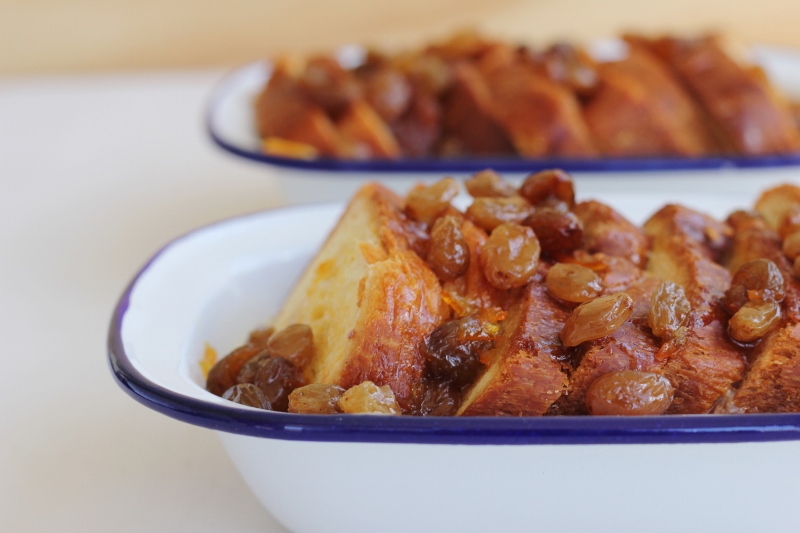 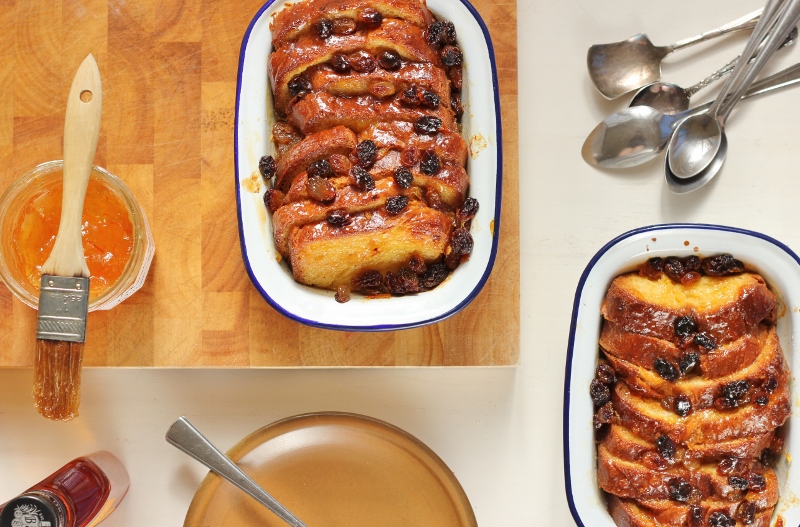 Whilst the whole, boozy jam on your toast thing is a total winner, I know there are a lot of people who would need convincing. So, a fresh loaf of brioche from my new local bakery was called in to play, and a jammy, boozy bread pudding was born.

The combination of this perfect brioche, wonderfully buttery, and the sharp, sweet boozy filling, dotted with spiked sultanas is a total winner. 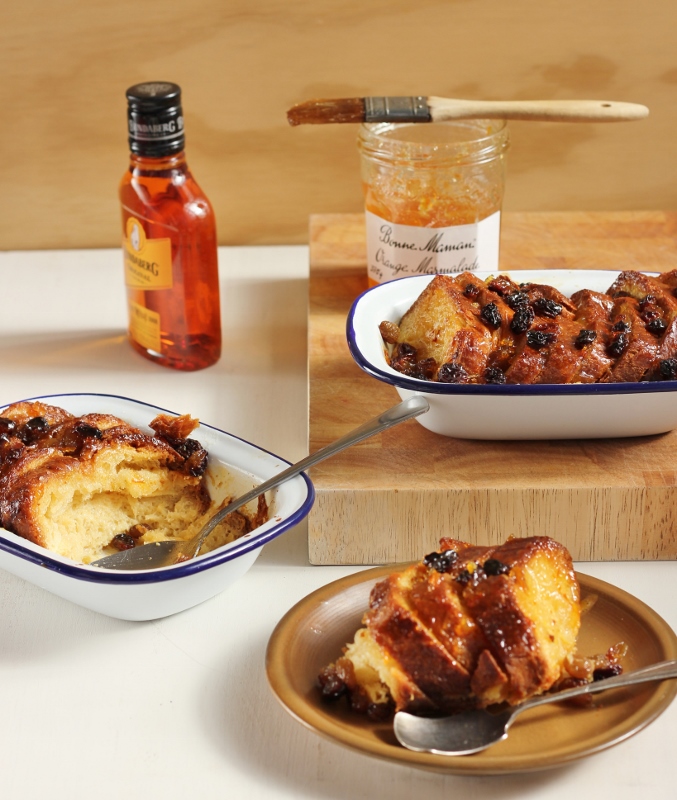 Once the whole boozy-sandwich operation has been soaked with a rich custard mixture, and then baked for a mere 20 minutes, the whole emerges gloriously from the oven, only to be brushed with yet more melted marmalade and rum.

And then you scoop out a jiggly, buttery, sharp and sweet slab, and if you’re a little bit naughty, you drizzle over yet more heavy cream. And then, my friends, you just tuck in. Oh yes you do. 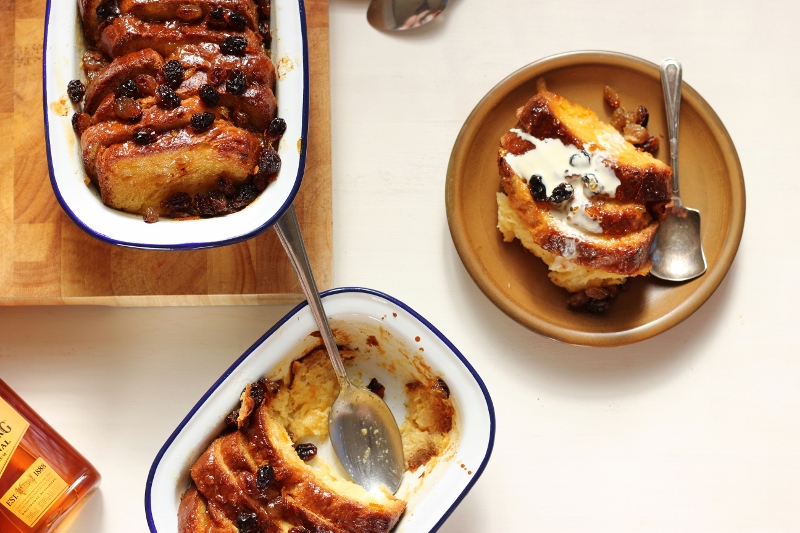 8 slices of brioche or challah bread

Preheat the oven to 180C, and grease two small, 2 cup capacity oven dishes (one large dish or four smaller dishes would be fine, but the baking time would need to be adjusted). Slice the brioche loaf into 1 cm slices. In a small bowl mix together the marmalade and 2 tbsp of rum. Make 4 sandwiches with the brioche, using around a tbsp of the marmalade mixture in each one, you should have some leftover for glazing later. Slice the sandwiches each into two squat halves, and line the halves into the dishes, crust sides up.

Place the sultanas in a small heatproof bowl with the remaining 1 tbsp rum, and microwave for about 30 seconds – this is a quick way to help the sultanas absorb the rum. Sprinkle the soused sultanas carefully over the brioche-filled dishes. To make the custard, whisk together the eggs, sugar and vanilla, before slowly whisking in the cream and milk. Divide the mixture between the two dishes, and leave to absorb for at least 10 minutes. Bake in a preheated oven for 20 minutes. When the puddings are baked, they will be set and slightly puffed up, and should be immediately brushed with the remaining rum and marmalade, for a beautiful finish. GAWJUSSS.