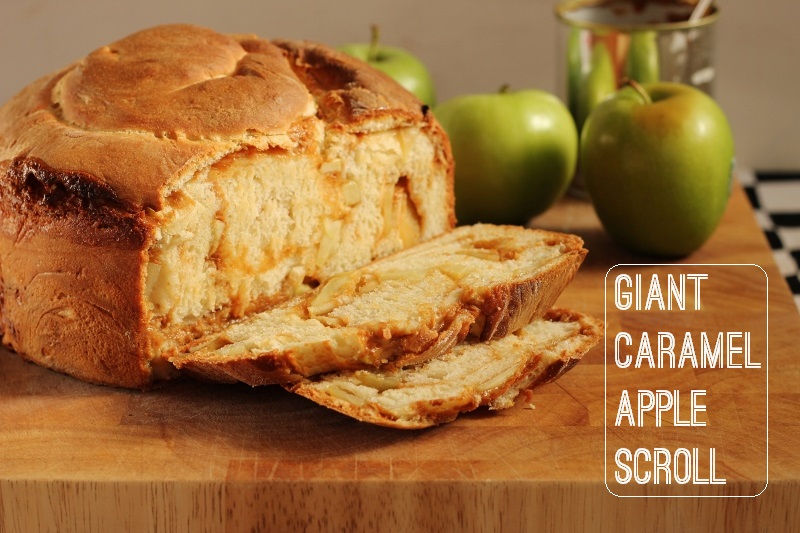 Today we are making GIANT THINGS!!!

….and hey there! How’s your hump day going? Mine was totally boss. I caught up with two of my very best lady friends for lunch today, and it was basically lifeblood to my soul. There is something about being around people who get you. When we’re together it’s all laughter and mocking of people we collectively dislike (just bein’ honest) and then once they’re gone, I feel this overwhelming sense of peace with the world. All is as it should be. 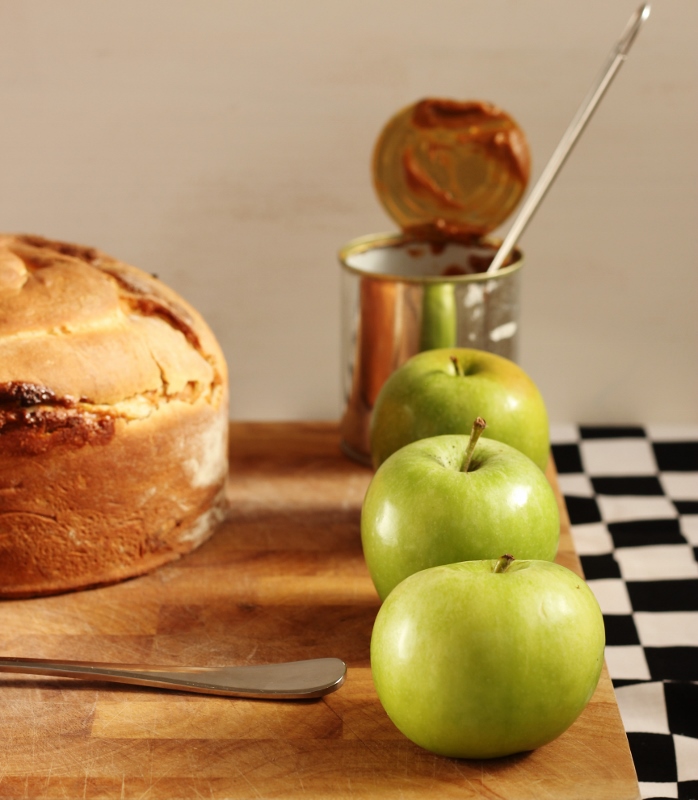 And then I came home, and I thought to myself, now is the perfect time to bake a giant version of a cinnamon scroll, and instead of cinnamon I am going to spread the inside with dulce de leche and thinly sliced apples.

And then everything really WAS right with the world. 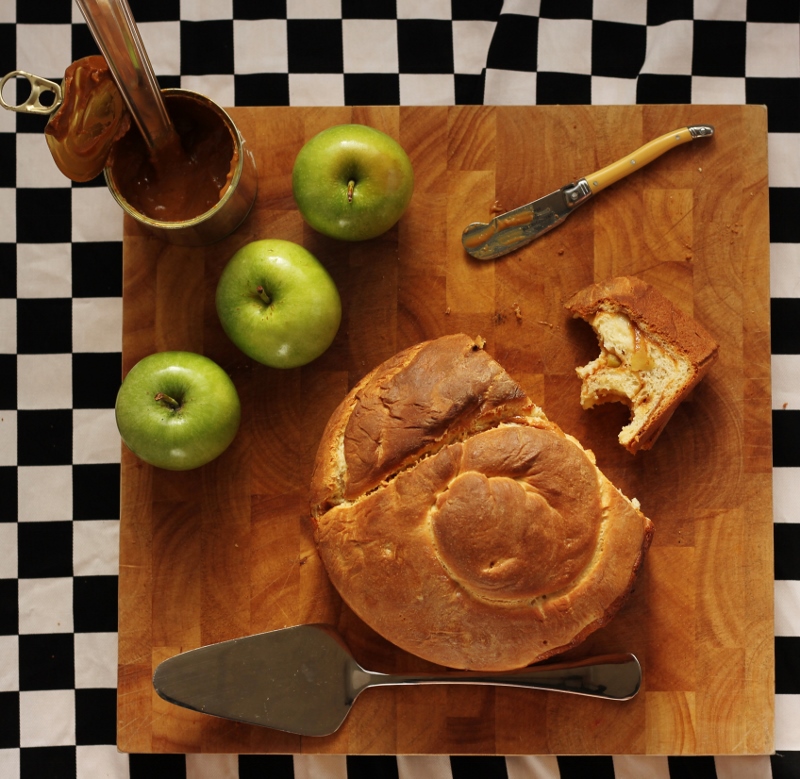 Except for these photos, which I must admit have turned out a little funky. The afternoon sun was absolutely streaming through the windows as I took these, so they ended up both super over-exposed, and also full of these deep dark shadows.

The cool thing is, that the eery vibe is perfect for Halloween, which is coming up! And man oh man – this would be such an amazing Halloween breakfast. Is that a thing? 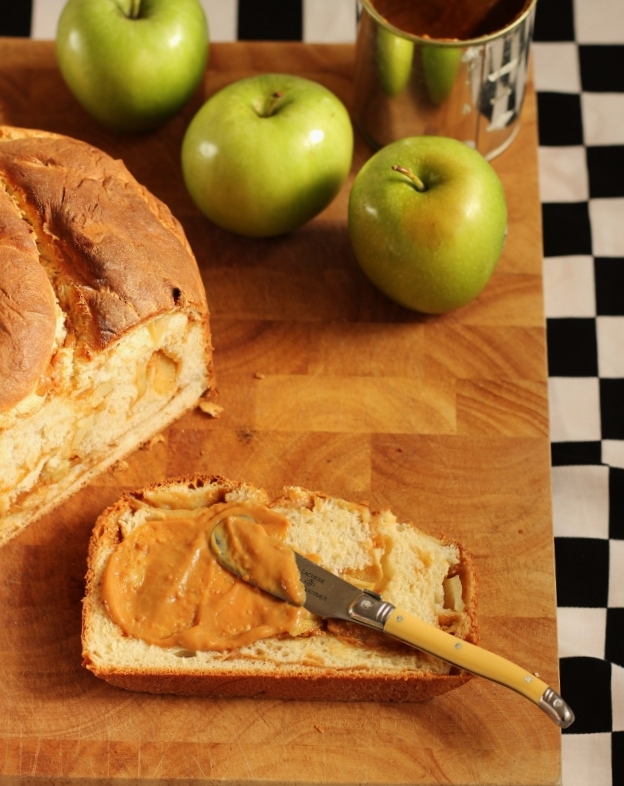 It would be especially good if you do what I did, and make yourself a lil sandwich with some leftover caramel my friends. Because surely Halloween is the one day of the year that caramel on caramel apple bread is an acceptable breakfast option? SURELY!

You know what’s weird is that we don’t really have Halloween here in Australia. It’s not weird for me, obviously, because I grew up that way, but we still do see decorations in the shops and scary movies on the TV. Truth be told I’m kind of glad. I am the world’s most humungous wuss when it comes to spooky things. I can’t handle it AT ALL. 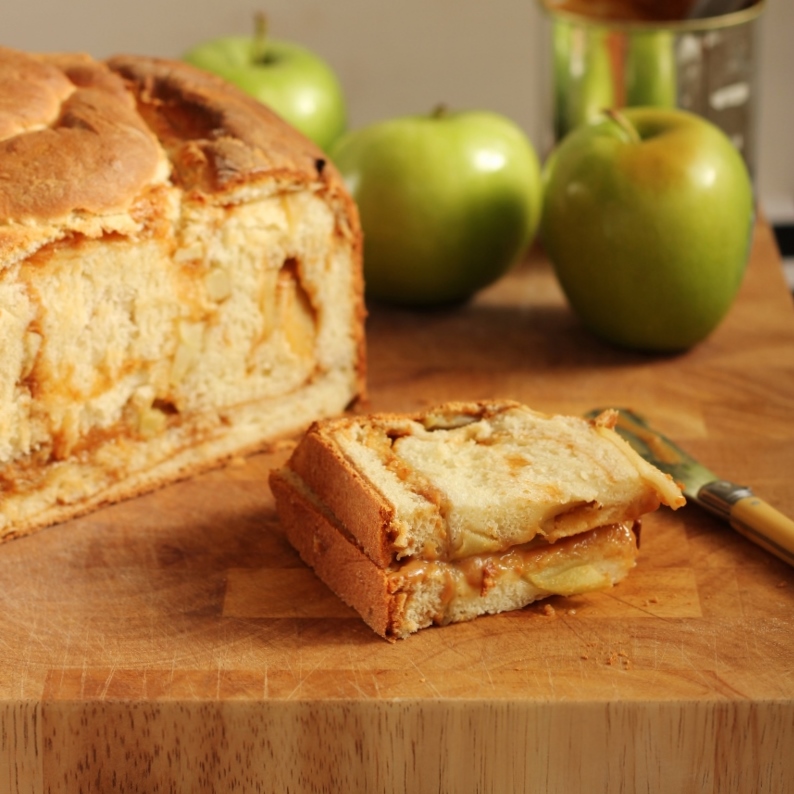 But I wholeheartedly support the consumption of chocolate in large quantities, so it’s kind of a double-edged sword. Do you think I’m missing out? Either way, I will keep myself company with this awesome bake while I ponder the pros and cons. 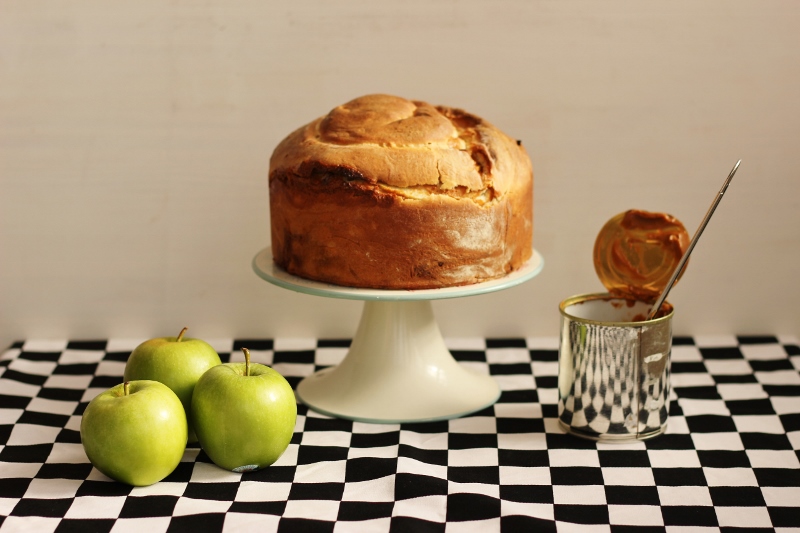 Makes one giant scroll, which would easily feed 6 for breakfast, or up to 8-10 for a snack.

First, make the dough. Place the milk in a microwave safe jug, and heat for about 30 seconds, until just warm. Add the yeast to the milk, and set aside for 10 minutes to activate. Once the yeast is foamy and activated, place the flour, butter, sugar and egg in the bowl of a stand mixer fitted with a dough hook, before adding the yeast mixture, and mixing on low speed until everything is combined. Once the dough comes together, turn the speed up to medium, and continue to mix for about 3-5 minutes, or until the dough cleans the bowl and starts to look silky.

Remove the bowl from the mixer, cover it with cling film and set it aside in a warm place for 30 minutes to an hour, or until the dough has doubled in size. Preheat the oven to 180C. Meanwhile, peel and thinly slice the apples, and toss them with the cornflour to coat. Once the dough has risen, punch it down and place it onto a floured surface. Roll the dough out to a rectangle about 9 inches (22cm) wide, and 24 inches (60cm) wide. Spread the dulce de leche thinly over the dough, leaving a border of about an inch all round. Spread the apples over the caramel. 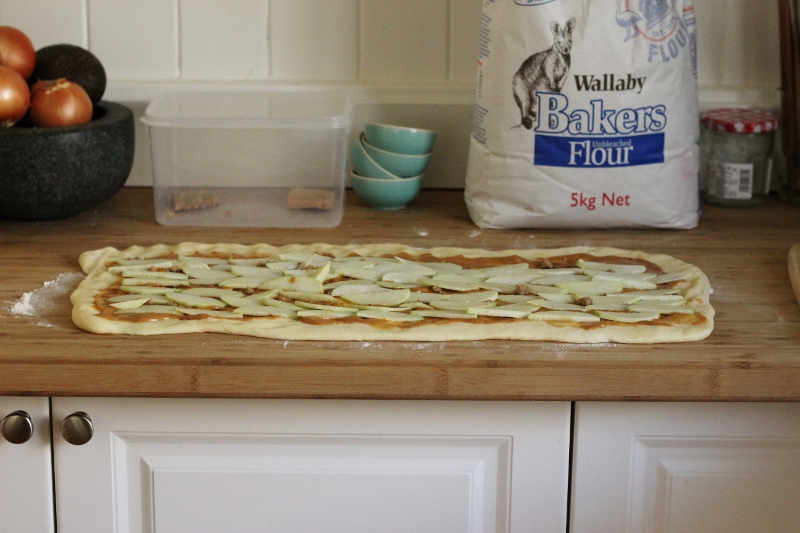 Roll the dough up starting from the long edge, and then curl it around into a spiral shape. Transfer the dough spiral to a greased 9 inch (22cm) spingform pan. Bake for 40-45 minutes. The scroll should rise up and turn golden brown, and sound hollow when tapped. Leave to cool for at least 30 minutes, before slicing and serving. HOT TIP: a schmear of cream cheese is heavenly.