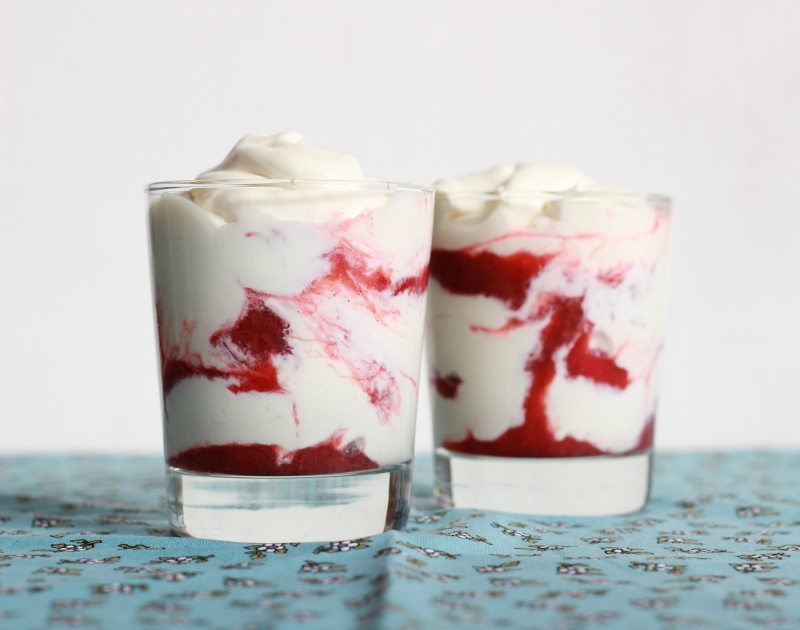 This is a punchy dessert. It’s exactly like the lady that I want to be when I grow up. At first it seems quite demure. Faintly coquettish and sweet. You might think it’s even a little shy. But then, the party gets going. Suddenly you spy her across the room, and she’s laughing her ass off in a crowd full of friends. That baby-doll dress she was wearing is suddenly a little less sunday school student, and a little more go-go dancer. You notice the heel on her boots, and the gleam in her eye. She’s not what you expected.

Before the night is over, she’s the one who always seemed to be where the drinks were flowing, where the laughs were the loudest, and the dancing the craziest. She’s smack bang in the thick of things with a fringe that somehow never looked out of place, and eyeliner in that perfect cat-eye formation all night long. Impressive, mystery girl, you think to yourself. Very impressive. She seems to radiate wit and poise and is it just my eyes, or is she even giving off a faint golden glow? No, she couldn’t be… it must be a trick of the light. 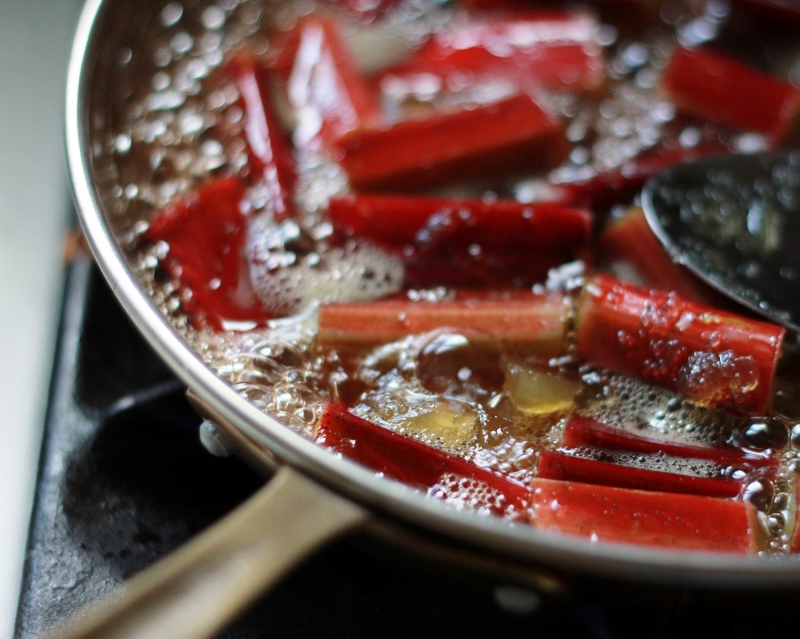 This mystery woman has the grace and charm and sensuality of my guru Nigella Lawson (who my thoughts are with right now), and the vivacity and lust for life of Vince Vaughan circa Wedding Crashers. She’s telling jokes in Japanese with a bunch of Salarymen in Tokyo. She’s entertaining dignitaries in Paris, serving perfectly cooked Cote de Boeuf with a delicately balanced bearnaise sauce. She’s dancing a strangely compelling flamenco at the backyard barbecue of your friend from Barcelona, and totally pulling it off. 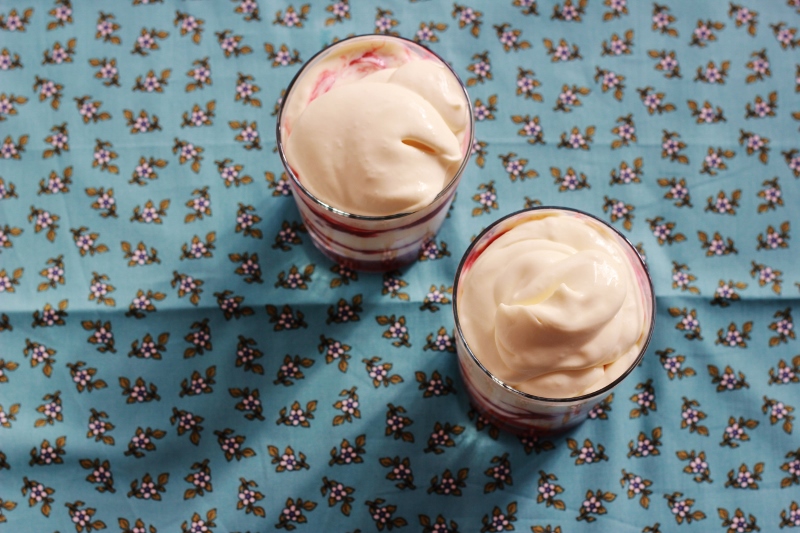 But I have no qualms in admitting that I’m several years, a couple of trips around the world and about 10 kilos away from being that girl. Not to mention the shopping that’s going to need to go into it. Which is where this fool comes in. Because this fool is like the dessert embodiment of that girl. It’s about as flexible and adaptable as a Woman of Mystery needs to be. The rhubarb and ginger compote is dark, warm and spicy with ginger and fragrant with the almost bubble-gum scent of rhubarb. A healthy dose of vanilla bean paste adds a richness, fullness and creaminess, before the cream even comes anywhere near it. 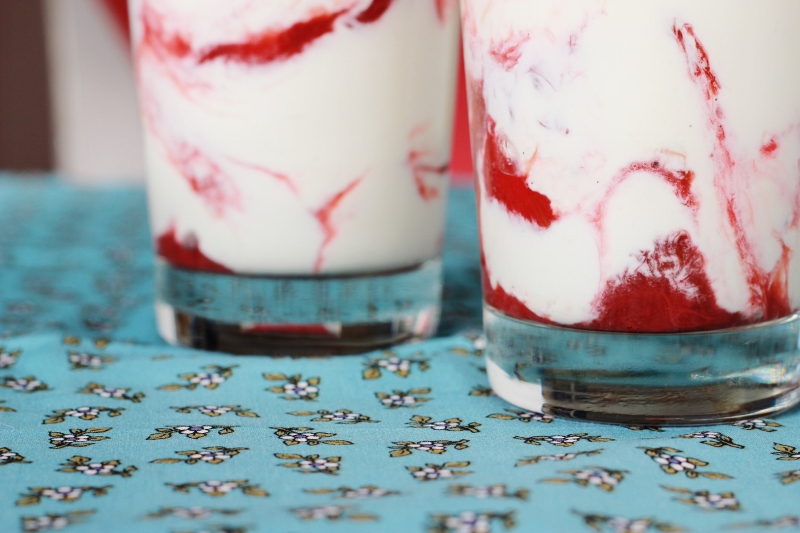 The yoghurt cream is sweet and ethereally light; it’s not just a simple sweetened whipped cream. Like our Woman of Mystery this cream is not always as it seems. The heavy cream provides the base layer of rich dairy while a healthy dose of thick greek yoghurt adds sourness, lightness and complexity. The two kinds of dairy are sweetened with honey – one of my favourite sweeteners, and a perfect match for rhubarb – before being whipped up into a veritable cloud of deliciousness. Layer up the rhubarb compote with the whipped yoghurt cream, and you have a dessert that is not only delicious, but gorgeous to look at and full of unexpected surprises on the tongue. 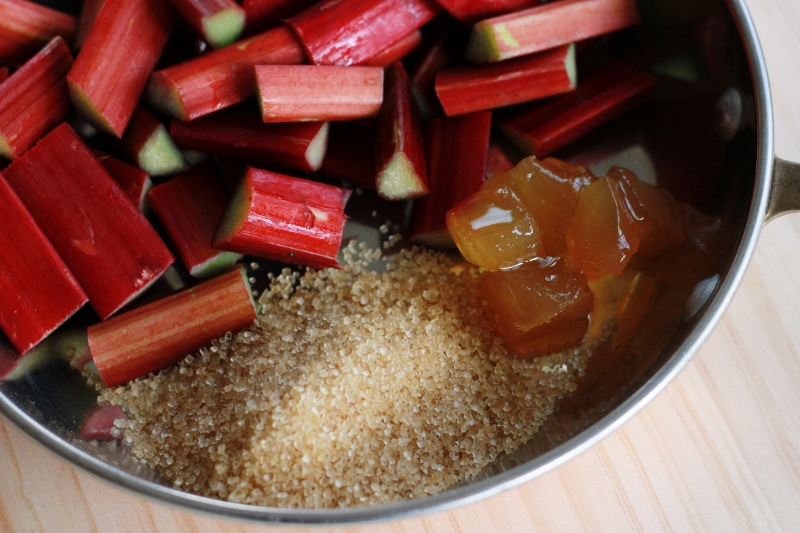 honey, to taste First, make the rhubarb and ginger compote. Trim and slice the rhubarb into 1 inch pieces and finely chop the stem ginger. Place the rhubarb, ginger, vanilla, 50g of sugar and a splash of water into a medium saucepan and bring to the boil. Cook the rhubarb until it completely breaks down, and the juices are thick and syrupy. Taste to see if the mixture is sweet enough for your taste, trying to make sure you maintain that nice sour edge. Place the compote in the fridge to cool completely. TIP: this is a delicious quick-time jam hack, and it is awesome on scones/biscuits. In a large bowl combine the cream, yoghurt and about 2 teaspoons of honey. Different kinds of honey have varying levels of intensity, so at this point it’s important to taste and add just enough honey so that you can taste it, but still retain the flavour of the yoghurt. Once perfected, whip the yoghurt cream until soft peaks form. In your serving vessel of choice, layer up the rhubarb compote and yoghurt cream, before chilling in the fridge until you’re ready to serve. Mystery woman approved.