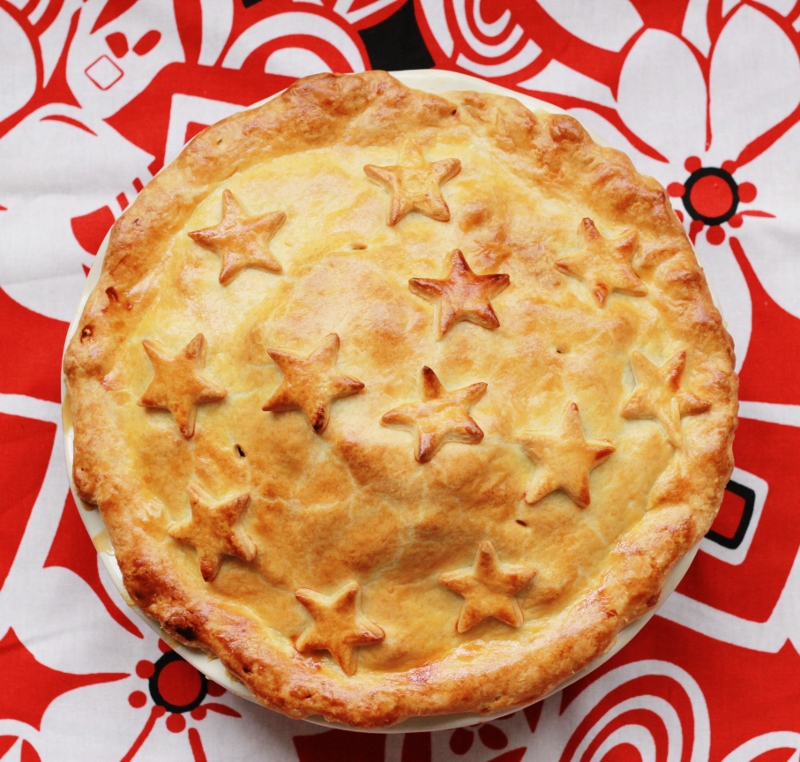 SHOW STOPPER. That is the only way I can think to describe this epic, humongous, star spangled pie. You see, down here in Australia, when you say pie, people think you mean a meat pie. Beef of indiscriminate origin swimming in gravy and wrapped in gluey pastry; the domain of service stations and tradie’s lunches. But as a child who was raised watching almost exclusively American films and TV shows, when someone says pie, I think APPLE! And I like it. 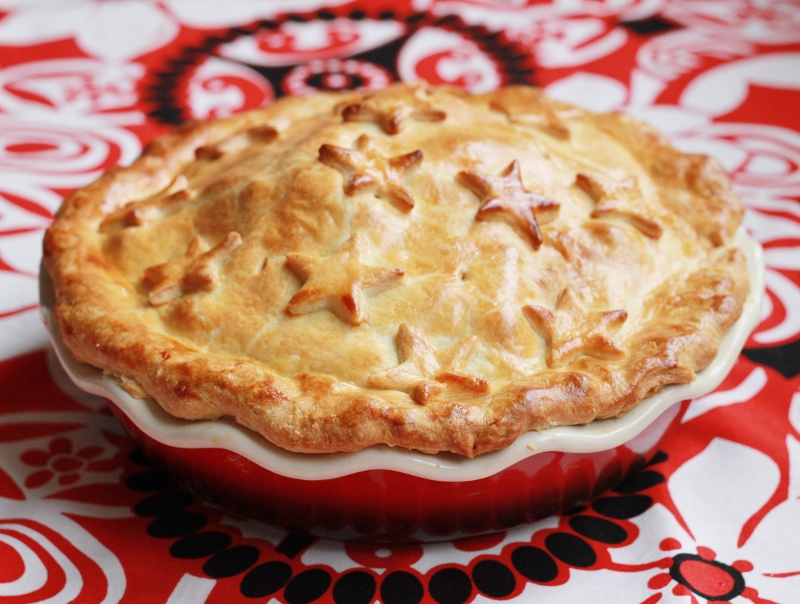 One of those films from the good old US of A was that classic, starring John Travolta: ‘Michael’. Do you know it? Two reporters and the supermodel Andie Macdowell go to investigate a report that the Archangel is living with a woman in Iowa. They go to investigate and discover that the story appears to be true, but that Michael is a smoking, drinking, foul mouthed sex addict. Mayhem ensues! Anyway, I was 6 when that came out, and I’m sure that most of it went right over my head, but there was always one scene that stuck with me.

There’s a scene where they’re on the way back to Chicago with Michael and they stop to eat pie. Andie Macdowell’s character, at Michael’s behest, goes on to sing a song about pie. And it goes a little something like this:

Pie
Pie
Me oh my
Nothing tastes sweet, wet, salty and dry
all at once so well as pie
Apple!
Pumpkin!
Minced
an’ wet bottom.
I’ll come to your place everyday if you’ve got em’
Pie
Me oh my
I love pie 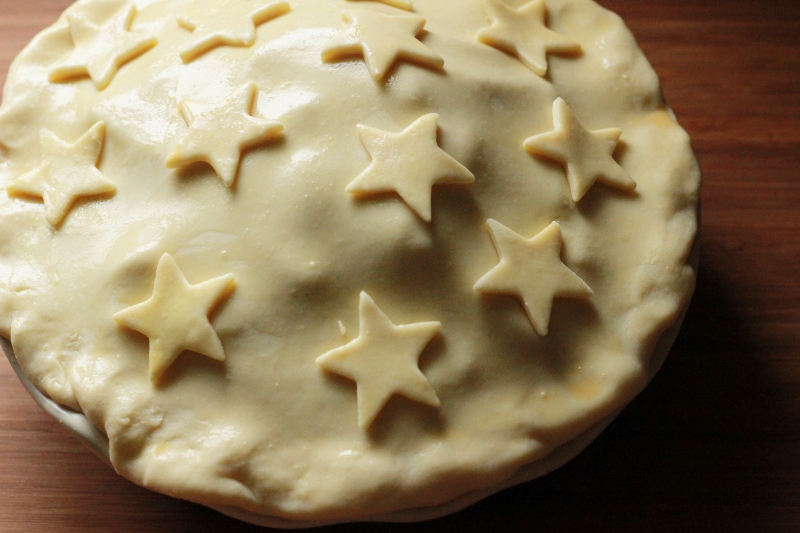 And nothing before or since has ever summed up how much I love American-style sweet pies. I like em all, cream pies, fruit pies, tarts, tortes. But there’s nothing like classic apple pie. It’s a superstar as far as desserts are concerned, and since I saw that movie when I was probably about 8 or 9, I have always been hooked. So this is my ode to the pie. I like to make a show of it when I bake apple pie, really go all out, and make a behemoth and cut out stars and scatter them across the top. Get the sugar and spices just right, glaze it and bake it with love, and breathe very deeply of the air in the house for the hour or so that it takes to bake. 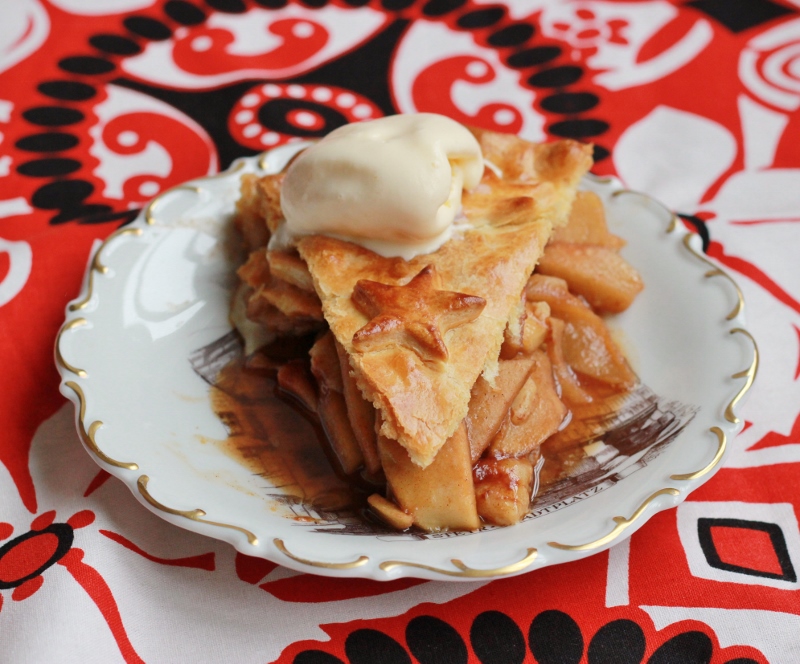 And then I like to greedily slice into the pie before it’s cooled properly, because the lure of a pie cooling on a window sill is FAR TOO MUCH for me to ever resist. I know, slap my hand, I’m a bad food blogger/photographer/stylist. But heck, before anything else, I’m an eater folks. And that’s never gonna change. And I’m totally cool with it – sorry/not sorry. A scoop of pure vanilla ice cream, should be served melting milkily over the top of your pie, and then by golly, you dig in. It’s pie a la mode. And if you’re anything like me, there is nothing that will steal your attention so singularly as a slice of pie with a healthy scoop of ice cream on it. Nothing at all. 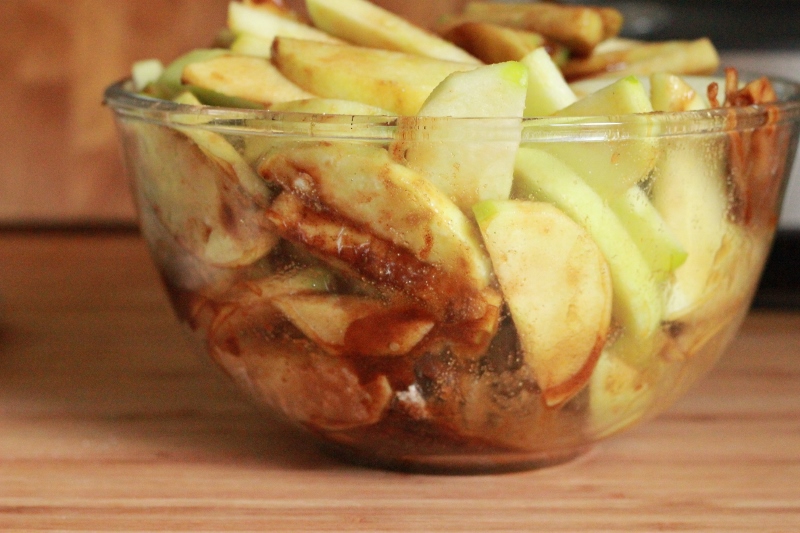 175ml cold water To make the crust, combine the flour, sugar, salt and butter in the bowl of a stand mixer or food processor and mix on low speed or pulse a few times, until the butter is partly combined into the flour, with some large pieces still pebbled throughout. With the mixer on low, or while pulsing the processor, drizzle in the ice water, until the mixture looks like it is about to come together. You may need slightly more or less water. Pat the dough together, divide into two disks, and wrap them in plastic to chill in the fridge. For the apple filling:

1/4 cup cornflour Peel, core and slice the apples into 1/2 cm pieces. In a large bowl, add the remaining ingredients and toss together thoroughly. To assemble and bake the pie: Preheat the oven to 180C. Remove the pastry from the freezer, and roll out one of the disks, using it to line a 9 or 10 inch (20-23cm) pie dish. Pile the apples in, trying to ensure that the apples are well compacted, and mounded evenly in the middle. Trim away the excess pastry, leaving one 1cm of overhang. Set the excess pastry aside. Roll the second pastry disk out, and drape it over the top of the apples. Trim the top layer as well, trying to make the overhang even with the bottom layer. Again, set aside the excess. Press the top and bottom pastry together, curling it under, and using the edge of the dish too press and seal it. If necessary, re-roll the pastry scraps, and cut out as many stars as you feel your pie needs. Glaze the pie with your glaze of choice (water, milk, cream, buttermilk, or egg) and stick on your stars. Place the pie in the oven and bake for 1 hour and 15 minutes, checking at 1 hour. If the pastry is browning too much, you can cover the pie with foil. Cool for at least an hour (if you can), and serve with ice cream, of course.