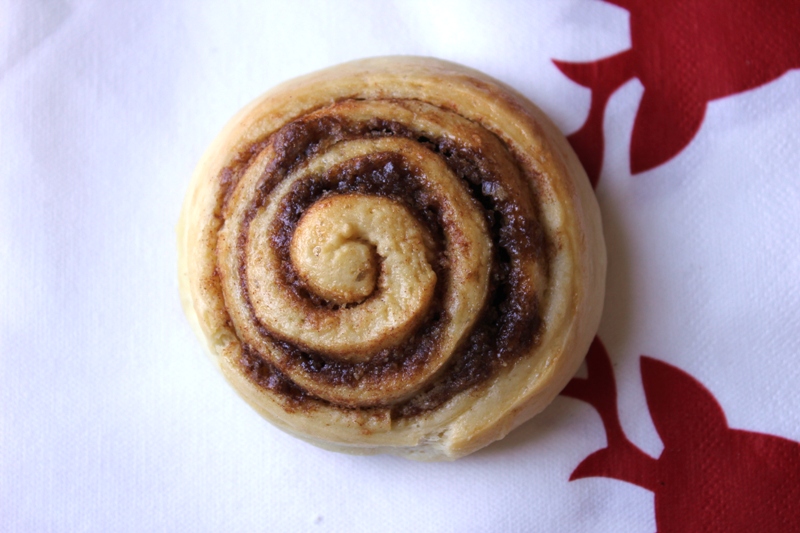 I know I have posted a recipe for cinnamon scrolls before, but they are one of my very favourite things, either to cook or to eat, and they are so delicious, that I can’t help myself. Anyway, repetition can’t be such a bad thing – after all my last 3 recipes or so have all been about strawberries! Last time I made these strawberries with cinnamon, which I guess is what lead me scrollwards. And this recipe produces specimens which are an absolutely picture perfect rendition of the archetypal bakery treat, the cinnamon bun. 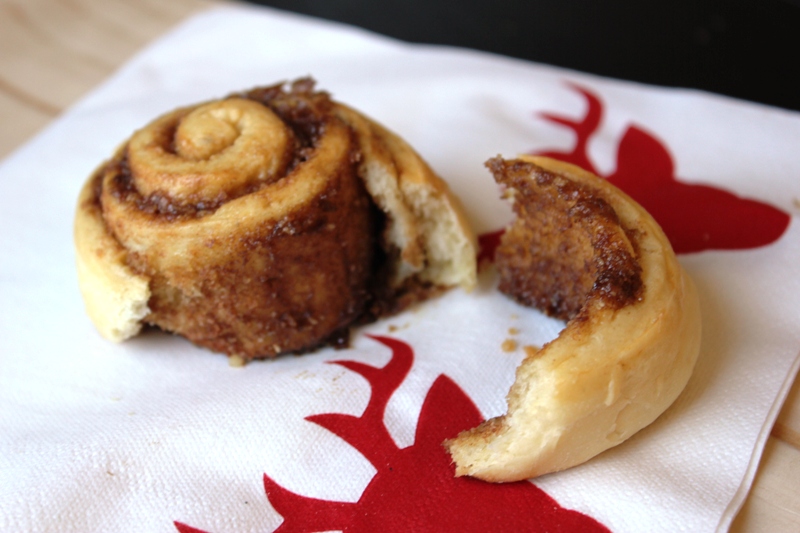 The other recipe I have posted in the past (terrible photos!) is big on the gooey caramel factor, and while these still deliver on that in terms of flavour, they are a little more well behaved in the baking. I have to admit to a little vanity in this regard, as there is something really satisfying about ushering forth from the kitchen something so perfectly formed. Nothing makes me feel more satisfied, more cosy, more at one with the world, and as though everything will be ok, as baking up a batch of these cinnamon scrolls, with their neat little swirls of filling. 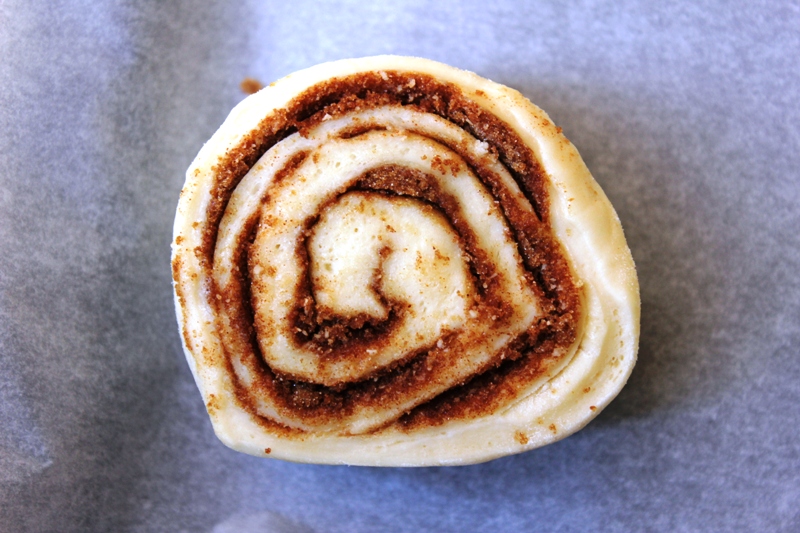 Life doesn’t always fall the way you think it will. Sometimes you get thrown a curveball. Sometimes life gives you lemons, and you simply cannot muster up a lemonade. These are for the days when you feel you need to simply ignore the lemons all together, and do something which you know if going to be a sure fire win. They are time consuming, don’t get me wrong. You need to be able to hang around and roll things out and let things rise. 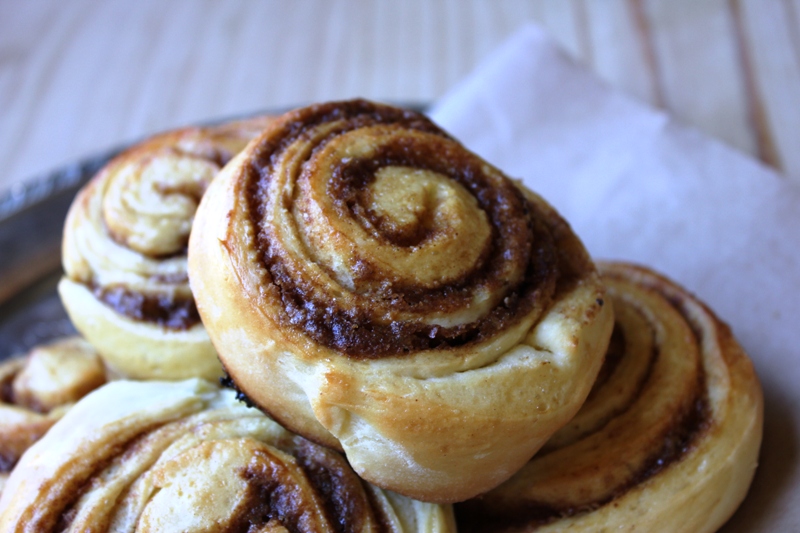 But even I, in all my ridiculously klutzy glory, can manage to get these looking like Christmastime and cheer. Which brings me to my main point; I am officially declaring the Christmas baking season open. With the scent of these cinnamon-y yeasted treats through the house, I felt I was welcoming in the yuletide, and it felt good. So this year, I am going to try for a veritable yule-tsunami. Let the Christmas cheer flow. 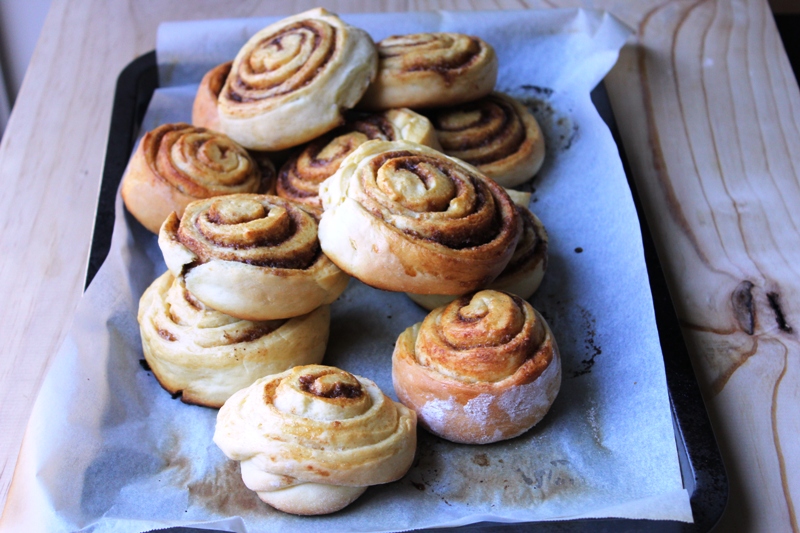 This recipe is adapted from one of my absolute favourite cookbooks Snowflakes and Schnapps by Jane Lawson. The book is full of the kind of Northern European recipes that I absolutely yearn for at Christmas-time, even though our weather doesn’t usually allow for it! For the dough:

1tbsp ground cinnamon For the dough, place the flour and sugar in the bowl of a large mixer. Make a well in the centre, and then pour in the milk, and sprinkle over the sachets of yeast, before leaving for about 10 minutes. Meanwhile, mix the brown sugar, almonds and cinnamon for the filling together in a small bowl and set aside. Then place the butter for the dough (not the filling) into a pyrex jug and melt it in the microwave, before mixing in the egg, egg yolk, vanilla and nutmeg. After the ten minutes are up, mix the egg and butter in to the flour bowl, and then mix using a dough hook for about 10 minutes or until combined and elastic, but still quite soft and sticky. Once done, cover the bowl with plastic wrap, and place aside to rise for about 45 mins to an hour. Once risen, punch the dough down, and roll out to a 50×50 cm sqaure, about 1/2 cm thick. Smear over the softened butter for the filling (I use my hands – its the easiest way!) and then sprinkle over the brown sugar mixture. Roll the dough up, from the side closest to you, keeping quite a tight roll, and pinch the edge of the roll of dough closed when you get there. Slice the roll into 16, and place onto lined baking trays, before covering again, loosely with plastic and leaving to rise for about 15 minutes. Whack the oven on to preheat now, too, at 180C. After 15 minutes, remove the plastic, and place into the oven for 15-20 minutes, or until golden brown and cooked through. A prod into the centre of a roll should spring back gently. Now grab one and carefully tear it apart to eat while still piping hot and melting. Mmmmmmmmmm. Merry Christmas.