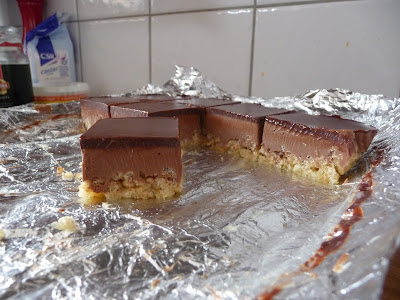 I made these little babies in response to the unforseen backlash of the Tim Cake incident which occurred a few weeks ago, but was only posted on Sunday. Here in Oz we would probably call them a slice, but the American book which I got them out of refers to them as Peanut Butter Crispy Bars. If you have a penchant for baking, or even just a mild interest in enjoying DELICIOUS treats and sugar hits that are a little out of the ordinary, I cannot reccomend this book enough. BAKED: New Frontiers in Baking by Matt Lewis and Renato Poliafito is an awesome insight into the American kitchen, and they have so many recipes that I am psyched to try in this book that it’s ridiculous. I also recently purchased (through my terrible book depository habit) their latest book, which I have to say is even more interesting than the first. 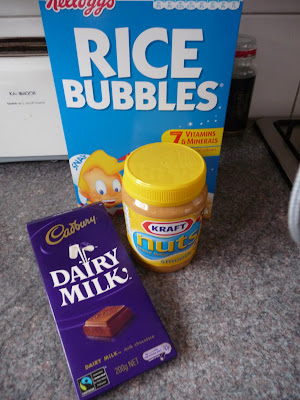 ?There is something hugely appealing about baking something using ubiquitous brand name ingredients. I know, it would probably have been better to use some organic puffed rice, some couverture milk chocolate and some organic, stone ground peanut butter instead. But I I have always been drawn to the trashy, the obvious and it just doesn’t seem in the spirit of these bars to suddenly turn snob. Anyway, they are delicious, and surprisingly so. I had to adapt the recipe a little, not having the time to get my hands on the American baking staple, corn syrup, and also not having a sugar thermometer means I had to wing it a little bit with the instructions. Despite all of that they still turned out spectacularly and were popular all round. Surprisingly not too sweet, even with all that chocolate, and following the current trend for a little saltiness in desserts, from the peanut butter. Did I mention that these are ridiculously easy to make? 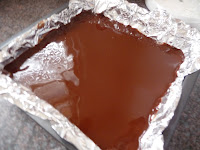 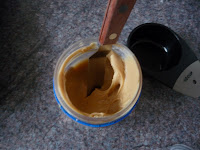 These were very popular among the bunch of people who were fast enough to jump in and snag one. I like to think that I may have had a hand in helping one little lady succeed in her exam. Sugar helps brain function, it’s a fact people – google it! (The Sugar Hit takes no responsibility for the accuracy of it’s facts) She certainly proved to be a little more eloquent than yours truly, when she asked me what they were called. My response: “Ummm, crispy, peanut butter, gooey, chocolatey, yummy square things?” Her response: “You should call them Peanut Butter Perfection.” So there you have it – peanut butter perfection it is. And people, it really is. 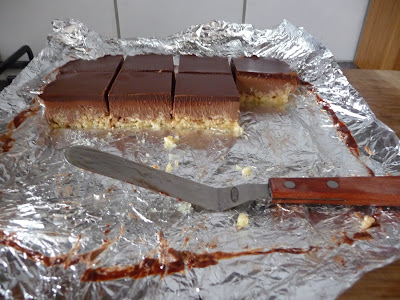 Hopefully these will be enough to put an end to certain others wandering around the office and saying “…caaaake.” after me. (I pretend to be exasperated, but secretly love it! Wouldn’t you?)
No? Just me? Alrighty then.

First line a 20cm square pan, or a similar sized circular or rectangular one, with foil and lightly grease the pan with flavourless oil or butter. Put your rice cereal in a large bowl and set aside, then combine in a small saucepan your water, sugar and syrup, and stir together gently, so that it does not splash the sides of the pan. Place the pan on a medium-high heat and wait until it begins to bubble vociferously and look syrupy, as opposed to liquid. Mine took about 3 to 5 minutes. If you have a sugar thermometer you can use that, you are looking for the soft ball stage or 110 C/235 F.

Once it looks right, you should remove from the heat and add in your butter, carefully stirring to combine. Working quickly and carefully, pour this over your rice cereal, and stir to coat all the grains. Tip this in to your prepared pan and spread and press across the bottom with a spatula. Leave this aside to get to room temperature, while you prepare the filling. EASY! Just melt together all of those ingredients, either in a heat-proof bowl over a pan of simmering water, or, as I did, in the mircrowave for about a minute and a half. I checked mine every 30 seconds, because I have a special talent for burning chocolate. Just take it out when it’s mostly melted, and stir until it is all smooth. Pour this over your base, and coax it right to the edges with a spatula, or the back of a spoon. Now, stick it in the fridge for at least an hour to set.

Finally, once your filling is set, you can melt together the topping ingredients using your preferred method, though it will obviously not take as long, and then pour glossily over your slice. Be very careful when spreading this out, and try to touch it as little as possible to it stays gorgeous and glossy. Now it just needs to set for another half an hour or so, and then cut into squares, four down four accross and share….or not.

P.S. If it is very cold where you are, I would reccomend letting the icing set out of the fridge for the last half hour, as it will retain it’s glossiness better. Unfortunately it seems to go a bit dull in the fridge. It doesn’t seem to put anyone off though!