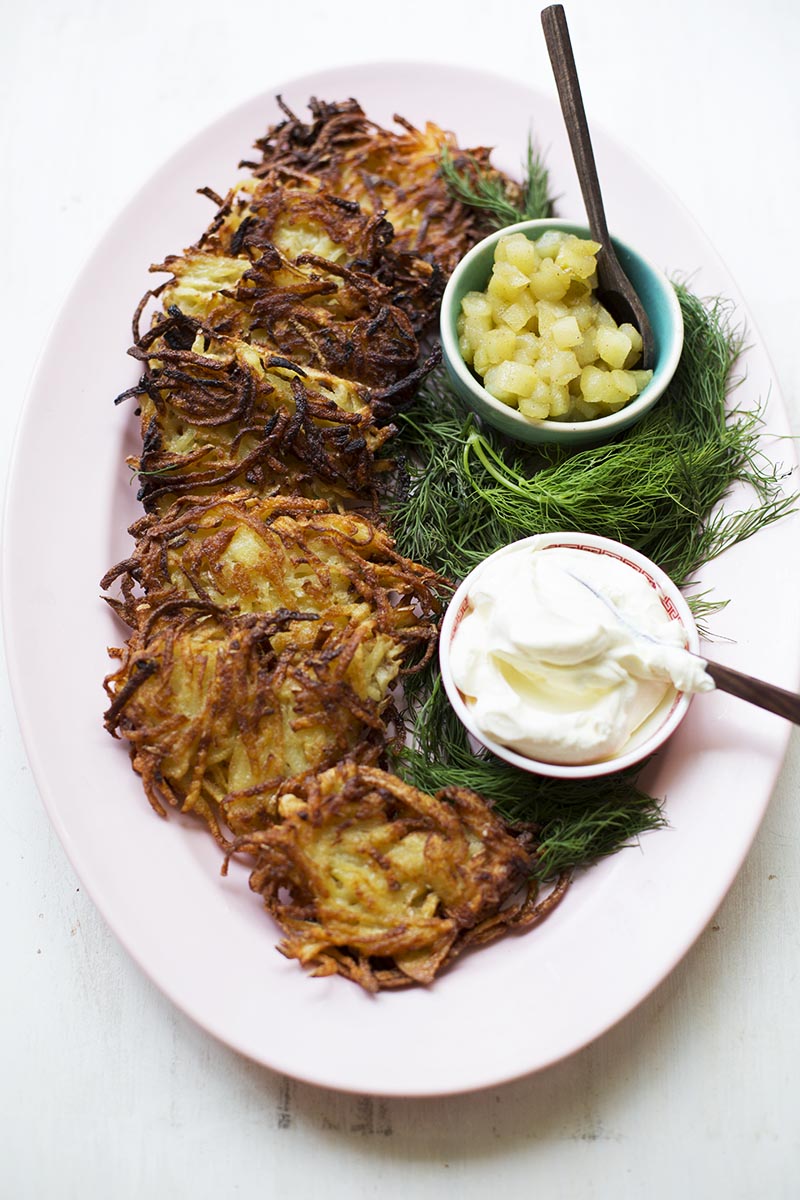 Friday should surely be officially designated fried potatoes day. What possible day of the week could be better on which to eat a crisp, salted, ever-so-slightly greasy fried potato? And on the streets of Germany, at their food markets, you can do so by asking for a Kartoffelpuffer. AKA, a Latke – they’re pretty much identical as far as I can see. But this is Street Food Friday, and I have it on good authority that you can get these on the street in Germany, so I’m calling it a Kartoffelpuffer. 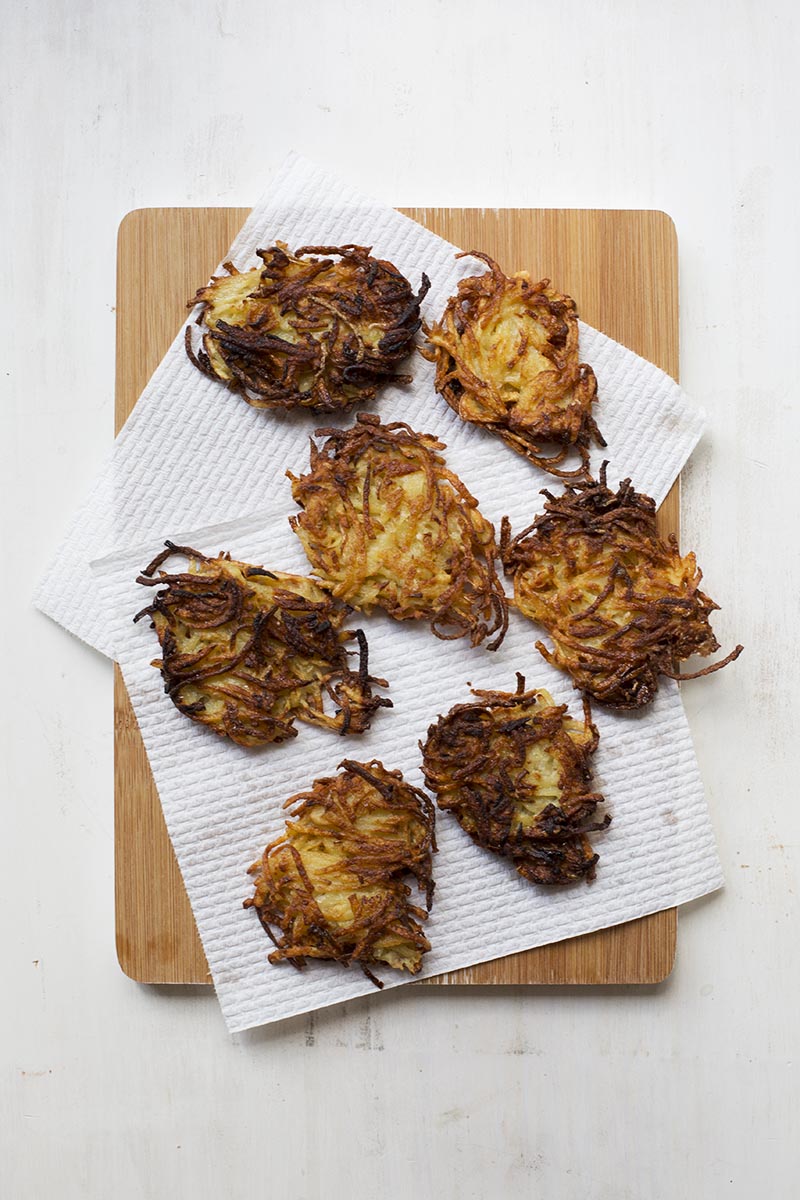 I could have gone with that other classic German street snack, the currywurst – a wiener topped with ketchup and a shake of curry, but I’m working up to it. Mainly I think it’s going to be something of a food styling challenge, and I don’t think I’ve quite got the chops as yet. And anyway, fried potatoes are definitely a passion of mine. I think that the classic french fry, or indeed the beer battered french fry, is probably the ultimate achievement in fried potatoes. But for the home cook, the potato fritter/kartoffelpuffer/latke/rosti simply cannot be beat. They’re just so easy to achieve at home. 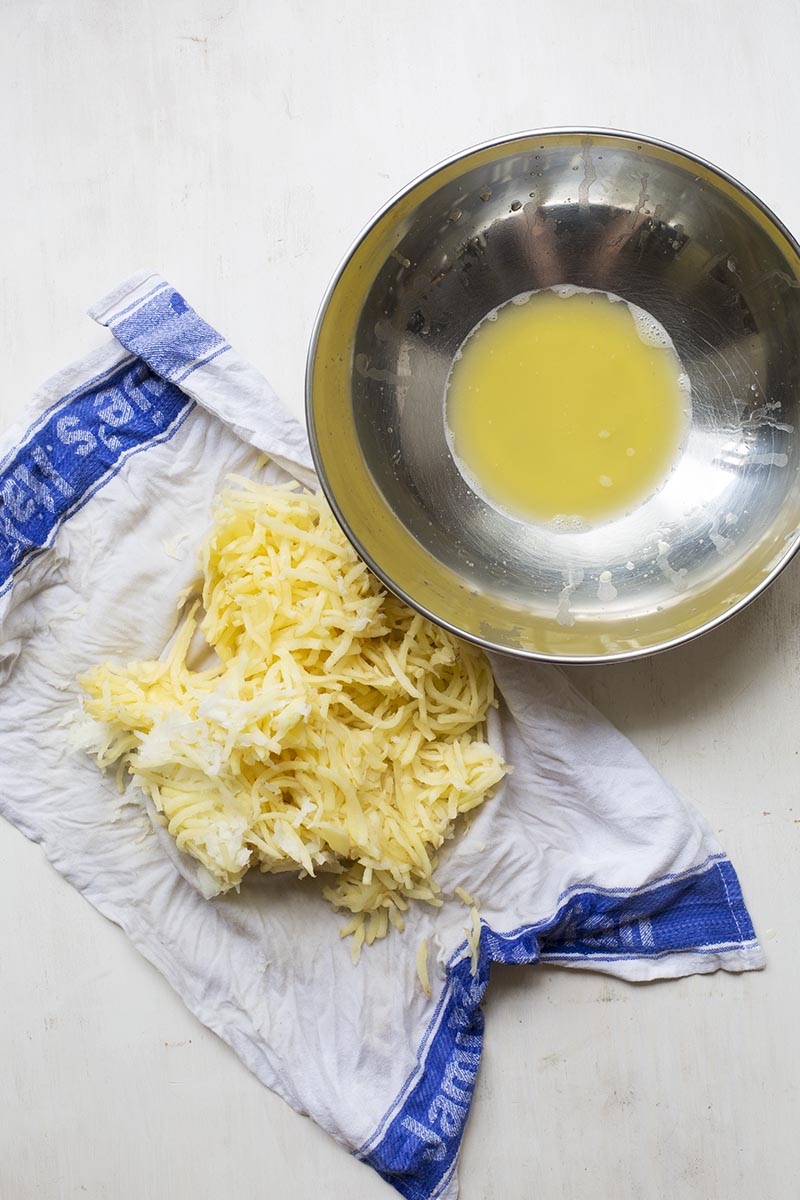 I have made these with a box grater in the past, but it’s so so so much easier if you have a processor with a grater attachment – it turns a 15 minute knuckle-scraping sesh into a 2 minute job, and it limits the time in which your potatoes could possibly oxidise. Once the spuds and a little onion are shredded, the mixture gets squeezed, and then that liquid discarded, except for a tiny, milky sediment (the potato starch) which will settle to the bottom of the bowl. This makes for an especially crisp fritter, which is less likely to break up in the pan. A little flour, seasoning and an egg also help keep things bound together, and tasting excellent. 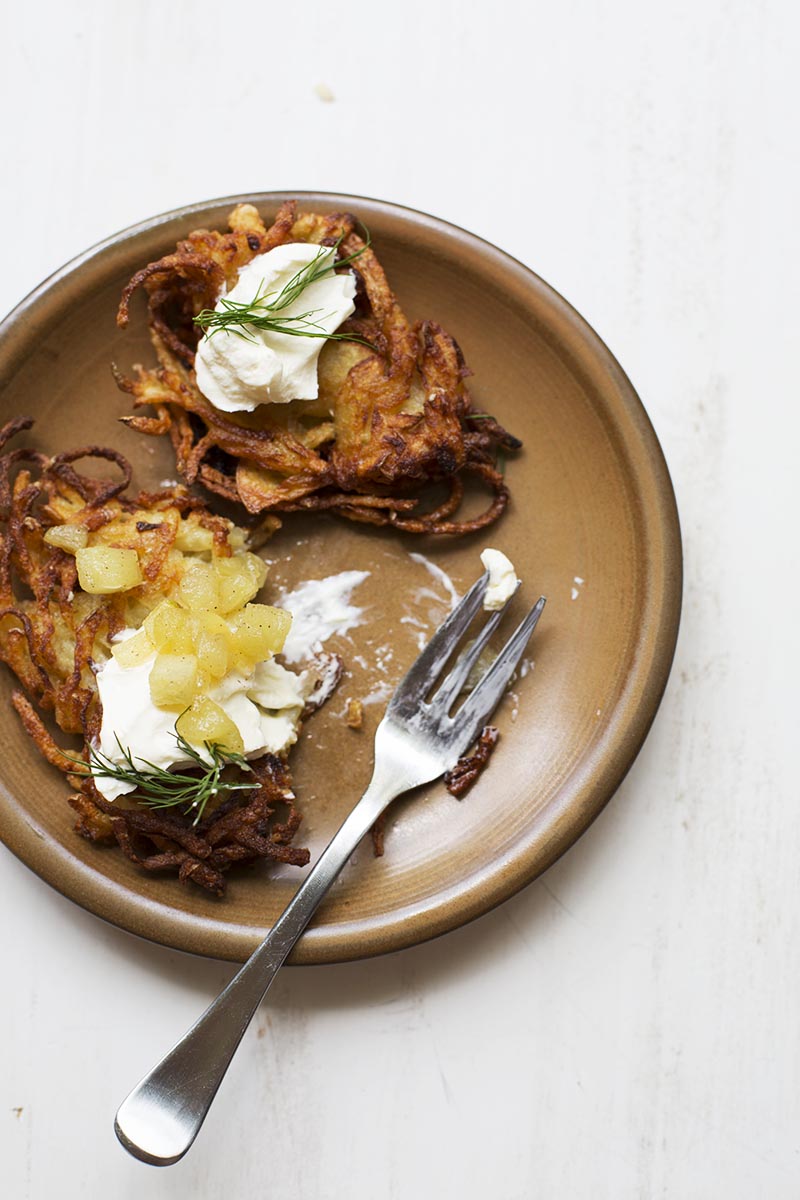 In a Bavarian street market around Christmas time, you might get one of these Kartoffelpuffer next to a splodge of apple sauce, which I have to admit sounded less than ideal to me at first. But people, get on board with the apple sauce. That sweet-tartness with the savoury potato and onion cakes is really next level. The hefty splodge of sour cream is a no brainer; the dill is because I’m obsessed with it, not a traditional accompaniment. But these would be great next to or underneath so many things – eggs any way, smoked salmon, gravlax, ham, prosciutto, salsa, caviar, whatever! As always, the important thing is only that you eat these, and that you smile, and feel the carb-love while you do. 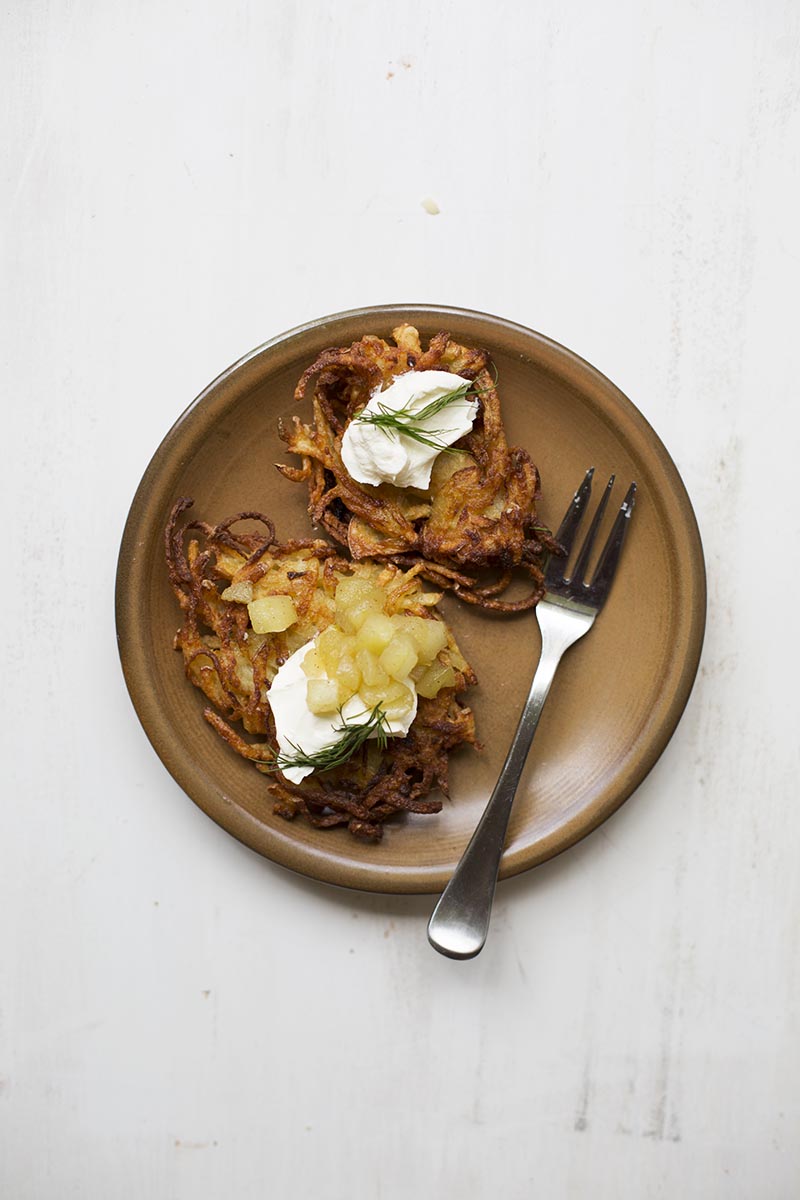 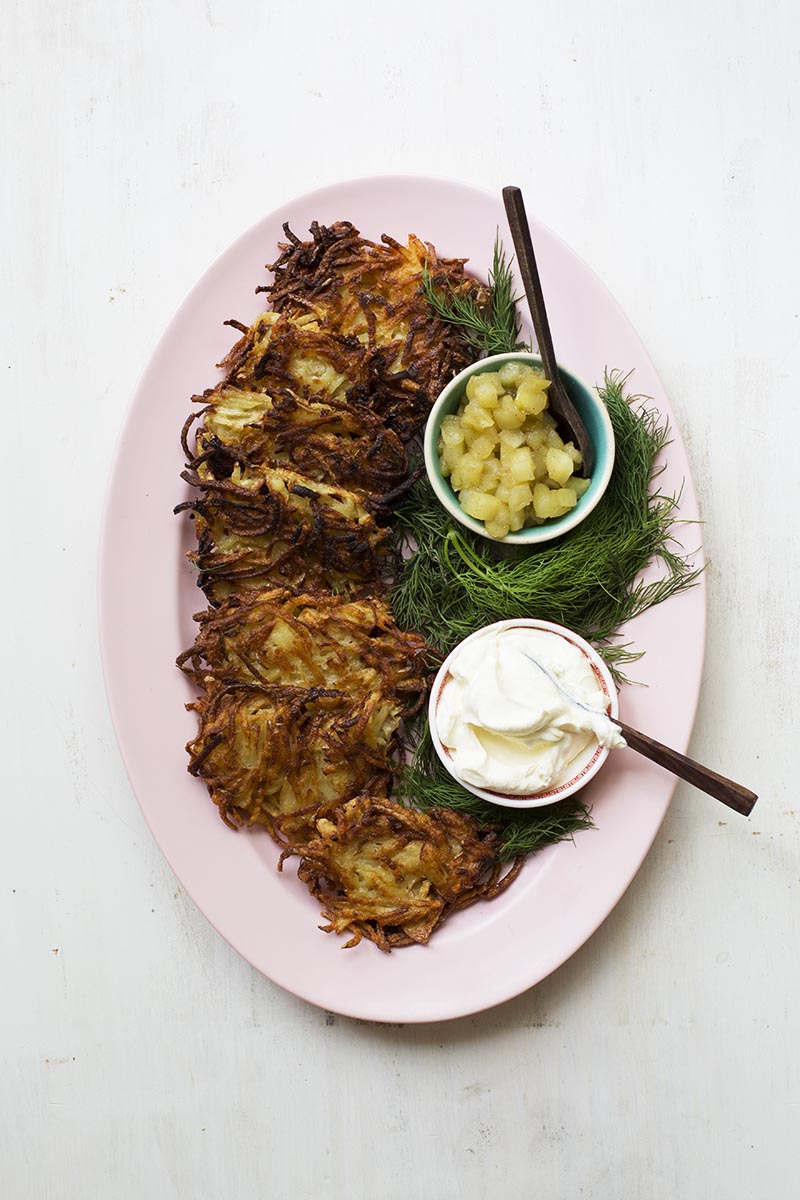