As I mentioned yesterday, Miss Izy Hossack has just released her first book Top With Cinnamon. This is a little rapid-fire question sesh we had about it a few weeks ago! Enjoy!

Firstly, the most annoying question ever, what is the one recipe in the book you want us all to make right now?

I’m hoping that absolutely everyone will make the Swedish Chocolate Cake! It’s so freaking easy to make – melt, mix & pour. You’ll have a gooey, fudgy chocolate cake in like 30 minutes and you won’t regret it. 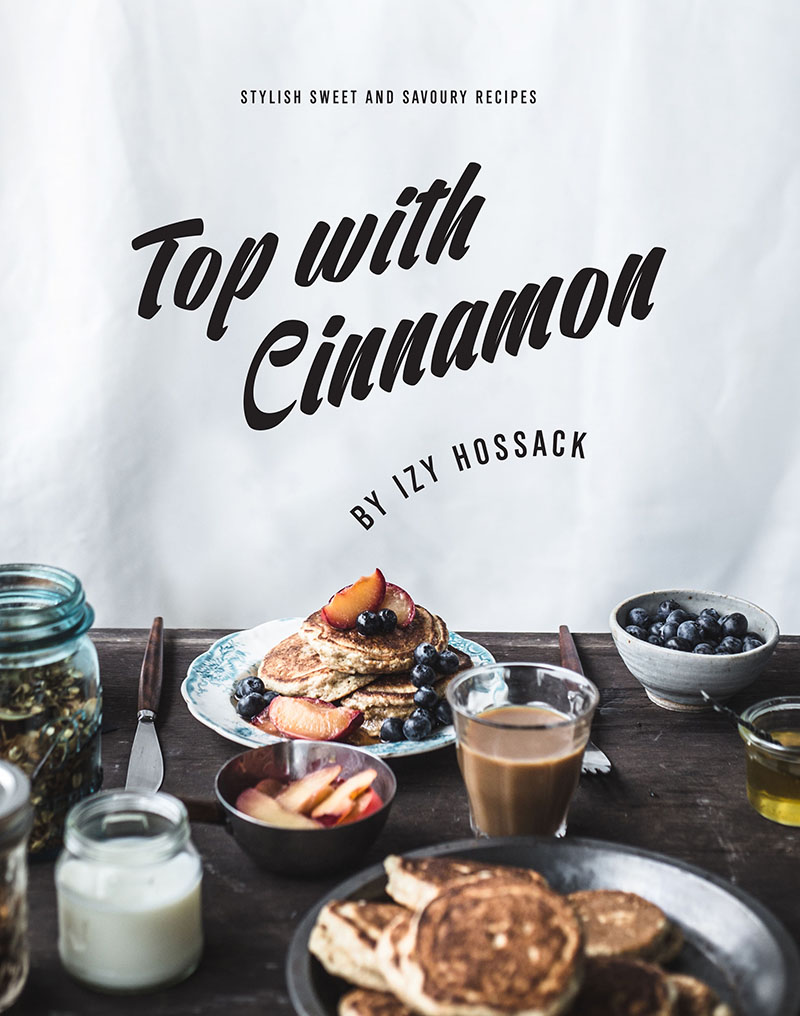 So tell me about the book, how is it divided up, what kind of reader were you thinking about when you were creating it, and when do you think people will use it?

It’s split into 6 chapters. Breakfast + Brunch first, which is ALL sweet stuff. There’s a mixture of super decadent things like pretzel cinnamon rolls, and healthier things like 10 minute granola which I make on the stovetop! Then there’s a chapter on Sides: some classic recipes like guac and roasted cauliflower and other simple recipes like chickpea & pomegranate dip. Next there’s a chapter on mains which has a few hearty salads and soups as well as PASTAAA! The next two chapters are Sweet Snacks and Desserts. There are little sweet nibbles a couple of layer cakes (boozy mocha coconut later cake is the bomb). Lastly there’s a basics chapter with things like nut butters, bread doughs a few step by step photo tutorials for making pastry and lining cake pans.

Basically my aim for the book was to not exclude people who don’t read food blogs or who haven’t cooked much before (people who are most likely my age). If you asked my classmates how to cook quinoa or make fresh guacamole or american pancakes from scratch they probably wouldn’t know. They also wouldn’t know about the wonderful thing that is roasted cauliflower (seriously none of my friends had ever heard of it). That’s the reason there are some solid basic recipes there. But I didn’t want the book to be boring! So it’s got plenty of modern, different recipes – they’re all very simple preparation-wise so people with basic kitchen equipment can make the recipes and less-confident cooks won’t find the recipes daunting. Lastly I’ve tried to keep a balance in the book, health wise. I mean heck yeah there’s loads of chocolate and butter! But there’s loads of vegetables, whole grains, healthy fats, nuts and fruit. In my mind it’s realistically healthy. It’s all fine drinking smoothies and eating raw brownies but I feel like no one can keep that up for their whole life! Eat some real, butter & sugar filled cake once in a while then have a quinoa salad, man.

I love the trailer for the book. Grey London skies, a great song, granola, and an absolutely epic looking cake. What was the filming process like?

Aw thanks! It took me 100 years to edit it together. But I’m pleased with how it turned out!

The filming took place on two occasions – the first was the beginning of this year around January. It was all cold and grey, a perfect representation of London 75% of the year. The moving bike shots were filmed by my friend cycling beside me with the camera around her neck. It was…interesting! There’s a lot of deleted footage from that haha. We did the walking shots in that day too. The kitchen shots were mostly from one day this summer with another one of my friends. We made a bunch of recipes from the book and shot little clips of the prep for each one. Then I pretended I knew how to use premiere pro and edited the vid together.

If you had any advice about the process for someone who wanted to write a cookbook what would it be? *cough*it’s me*cough*

Have a few little notebooks that you can carry around with you all the time. That way you can write down all your thoughts for the book – recipes, props you’d want to use, ingredients techniques. It’s also ridiculously useful for when you’re testing recipes and making changes to them. I filled two A4 notebooks and a smaller one for my book – you can even see a pic of some of them inside the book! (p75)

What did you do to celebrate this whole crazy, amazing, awesome achievement? Did you get yourself a congratulations gift? I totally would have.

I bought myself a camera! Well, I bought it when I was shooting for the book but I still count that as the gift from ME TO ME :D

Thanks so much Izy! If it wasn’t already obvious I absolutely love this lady and her beautiful work. You can check out her book here.