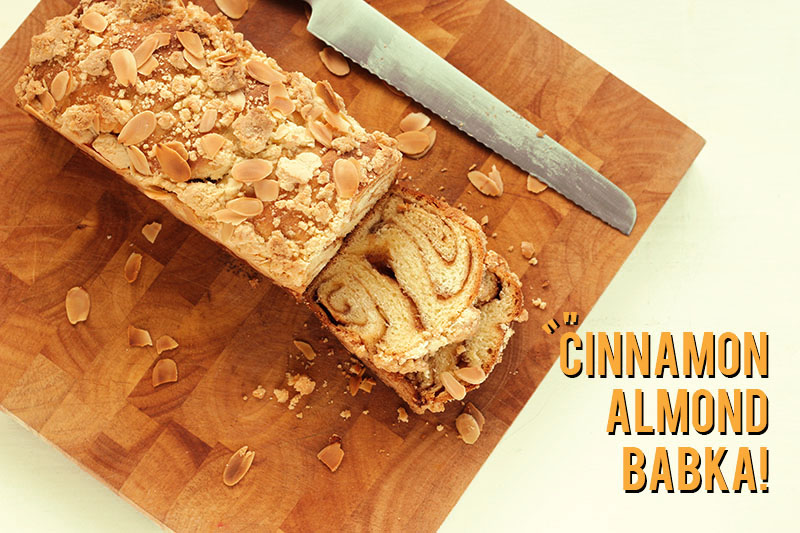 I am bringing the Holiday spirit to November, HARD.

Because in case you didn’t know cinnamon = the flavour of Holidays. Yes that’s right, it’s a little known fact. The Holidays have a taste; the taste is cinnamon. This Cinnamon Almond Babka is an explosion of cinnamon flavour, wrapped in a brioche dough and topped with almondy streusel. It’s the equivalent of decking the halls with boughs of holly and then watching “It’s the Great Pumpkin, Charlie Brown” before writing a huge list of things you’re thankful for, and lighting a menorah.

It is a Babka imbued with the Holiday season. 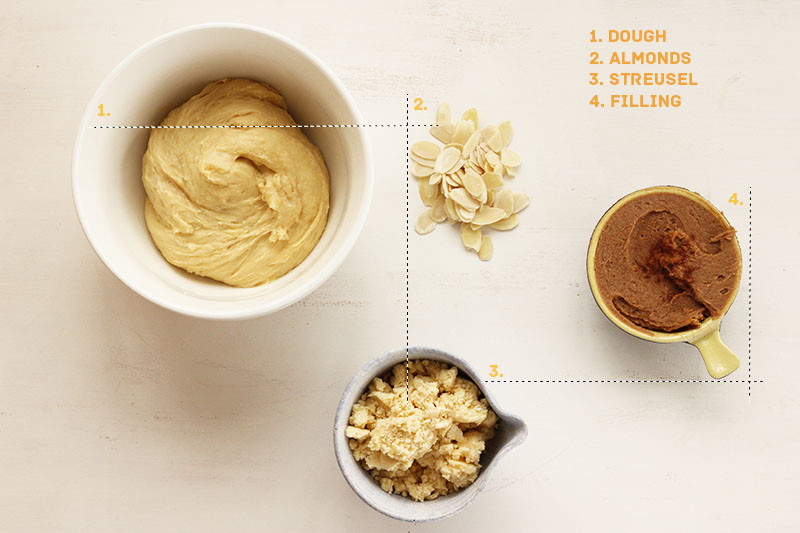 Guess what? I got you an early gift. It’s this Babka recipe. Because I simplified the HECK out of every other Babka recipe I could find. This one does not make three loaves, it makes one. This does not require three million bowls and spoons and jugs, just an electric mixer. This will not take you three days and two stress-headaches to make.

Because, nice though I’m sure it would be to have three loaves of Babka kicking around at any given time, I live in a house with one other person, and even he couldn’t eat that much Babka.* So I scaled it back for us one-loaf types. And I reduced the bowl usage because I have no dishwasher, and the skin on my hands could use an early gift too!

*That’s a lie, he could and would. 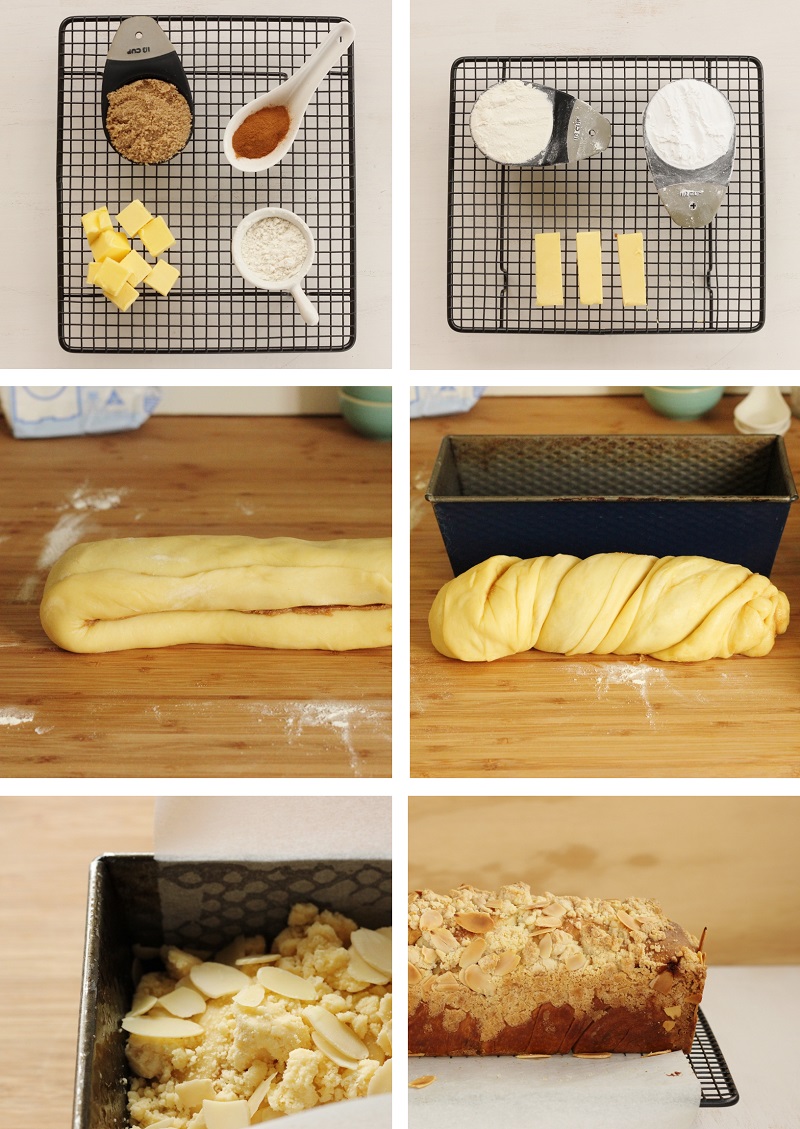 The trick is this: you make all three items in the same mixer bowl, one after another. And, if you do it in the right order, you don’t even need to wash it up in between.

I know – it’s basically heresy. But it’s not like I’m working with raw meat here. I can deal with it if a few scraps of extra butter and sugar make their way from one section of the recipe to another. Because I’m LAZY. I’m a big ol’ Holiday loving, Babka making, ball of laziness. Join me, won’t you? 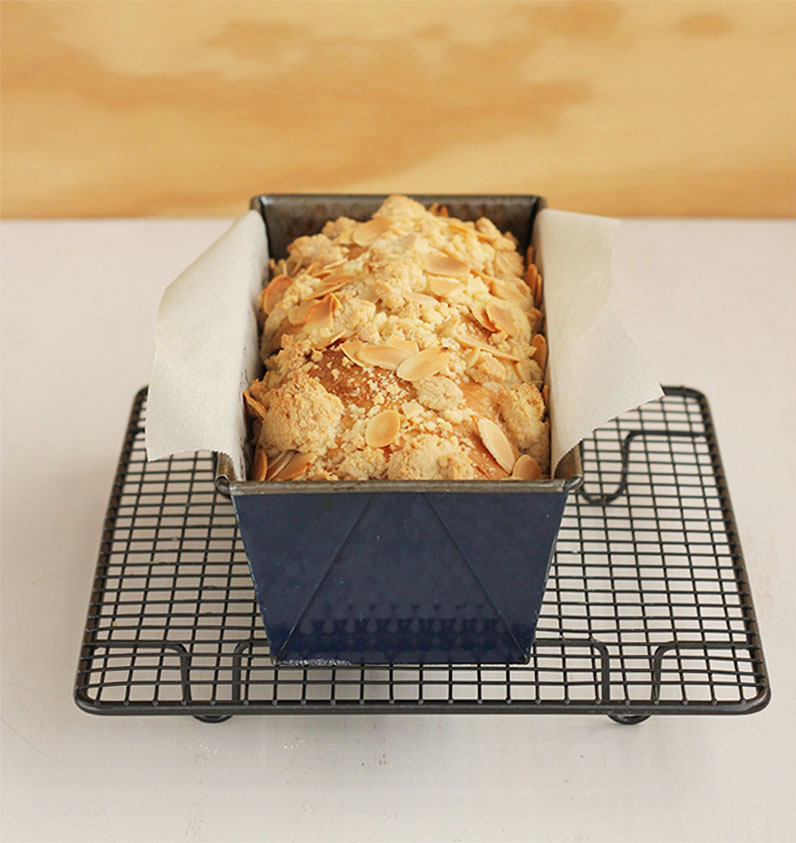 So Cinnamon Almond Babka? You have no reason not to make and eat this before the week is over. It’s easier than making cinnamon buns – SO EASY! And it’s so delicious it would make even the biggest Scrooge McDuck start hanging twinkle lights. The smell of it wafting through the house as it bakes in all it’s caramelised, cinnamon-scented, buttery glory, is incredible. People will throw rose petals before your feet when you give them some of this Babka. Lesser Babka? I think not!

P.S. HALP! I just got photoshop and it’s blowing my mind! Any tips/tricks/tutorials/blog posts that you recommend? 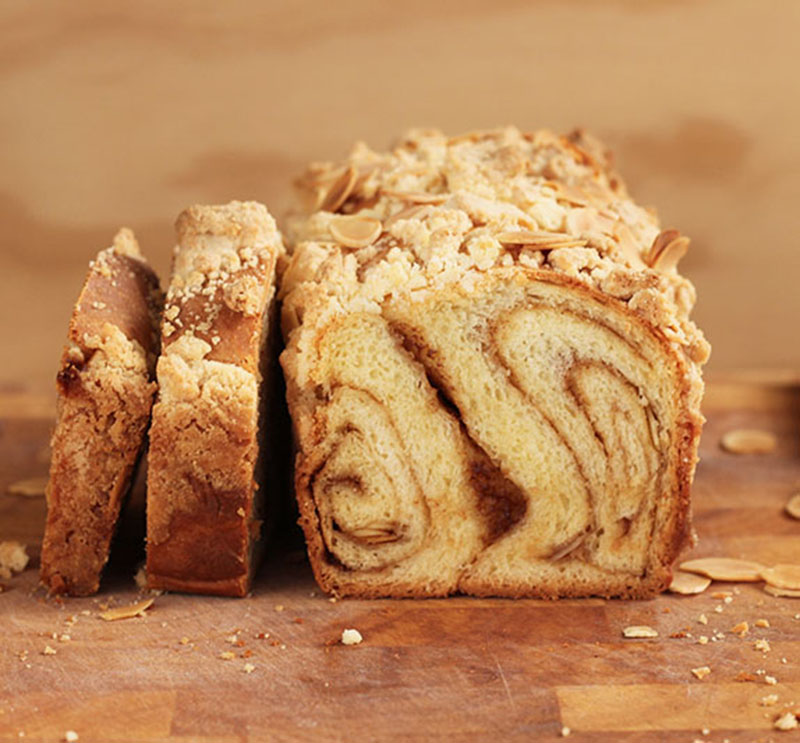 First, make the streusel. Throw all the ingredients except the almonds into the bowl of an electric mixer fitted with the paddle attachment. Paddle on a low speed until the ingredients look like sandy oatmeal. Using your hands gather up the streusel and put it into a bowl, it should clump together when squeezed, stir through the almonds. Place in the fridge.

Next, make the filling. In the same mixer bowl (up to you whether you rinse it or not – I DON’T), throw in all the filling ingredients and paddle until they are completely combined and smooth. Scrape this mixture out into a small bowl (get all of it! it’s precious) and then set it aside, at room temperature.

Now, make the dough. Place the warm milk, the yeast, and a pinch of the sugar into the bowl of your mixer (again, rinse if you wish, but I don’t) and leave it for 10 minutes to get frothy. Once the yeast is frothy, add the remaining sugar and the egg and paddle to combine. Next, add the flour and salt and paddle until a dough starts to form, at which point you need to switch to a dough hook. Continue mixing with the dough hook until the dough comes together. Now, the butter needs to be gradually added, cube by cube, mixing all the while. This will probably take anyting from 10 to 20 minutes, so keep the mixer on low, and be prepared to stop the mixer occasionally to redistribute the dough. TIP: if your butter is not quite room temperature, squeeze each piece in your hand to warm it up as you add them in. Once all the butter is incorporated, remove the mixer bowl, cling wrap the top of it, and leave it in a warm place for about an hour, or until double in size.

Assemble the Babka. Grease and line a 9×5 inch loaf tin. Punch the dough down, and place it on a floured surface, before rolling it out into a rectangle twice the length of your loaf tin, and twice as wide. Spread the almost all the filling all over the dough, and then roll it up, starting from one of the long side. Now smear the remaining filling over the top of the rolled up dough, and fold the log in half lengthways (see pic above). Now take the folded log and twist it in your hands about 5 times, before placing it in your lined loaf tin. Crumble over the streusel and leave to prove for about 20 minutes, while you preheat the oven to 170C (350F). Once the 20 minutes is up, bake the Babka for 40 minutes. Cool on a wire rack for at least 20 minutes before slicing!