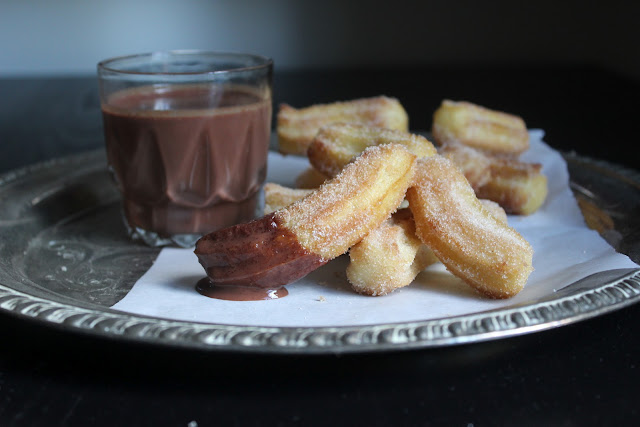 I toyed with the idea of calling this post, Churros, Chocolate and the joys of being bored. Because right now, I am bored, bored, bored. Bored. This is not the most bored I’ve ever been, but I tend to think that boredom only has one level, you’re either bored or you’re not. You can’t be more or less bored, you just are, and then as soon as something interests you, you’re not any more. Right now, though? Je suis bored. That’s French for I’m BORED. 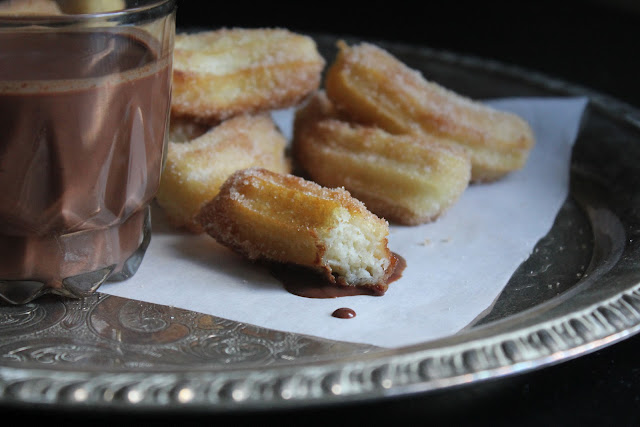 The real trick to life, the key which could unlock the greatest Buddhist ideals of nirvana, is to never get bored in the first place. Live in the moment to such an extent that ideas of boredom or un-boredom never even cross your mind. Concepts such as pain, sorrow, boredom and melancholy would cease to exist for you, and you would exist in a state of hyper reality, where each moment would be simply bliss. Sounds good huh? Turns out, this is not so easy to achieve. 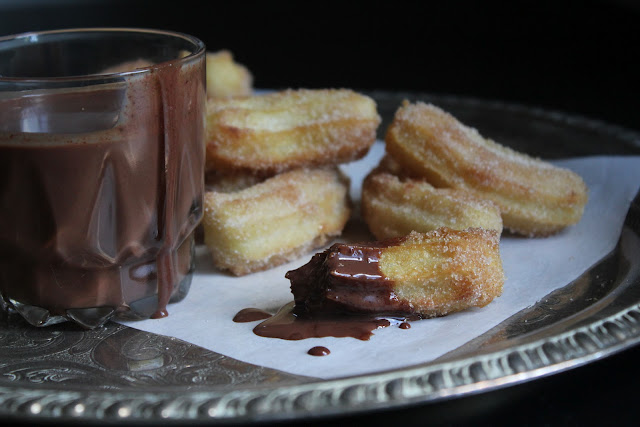 Turns out people the world over have been working to achieve this goal through a variety of methods since humans first developed self-awareness. I have always been a cocky soul, so therefore I am still hopeful of my abilities to join the ranks of the enlightened ones, but for now, and with the present weight of crushing boredom upon my shoulders, it seems unlikely. What’s a girl to do? 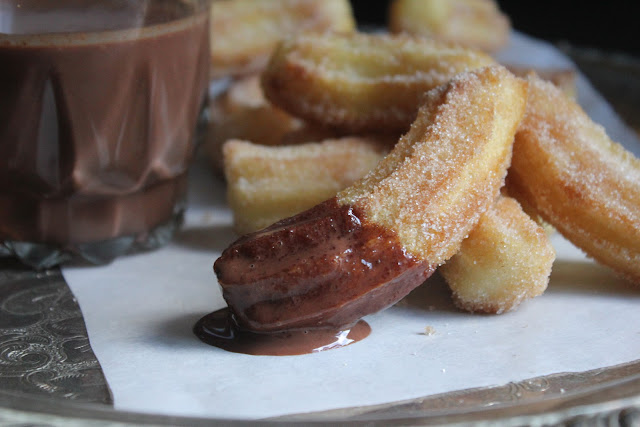 Finding myself drifting aimlessly through a lazy Sunday afternoon recently, I turned to fried dough and chocolate. Perhaps, I thought, I would find the key to eternal freedom in the arms of a crispy fried, sugar dusted, cinnamon scented Spanish donut, and be finally release from this material world. I am aware that it is ironic to rely on a thing to release you from needing things, by the way, and I’m also presently bopping along to Madonna’s Material Girl! But that is an aside and I apologise, now to continue; on my search for freedom and happiness I forged ahead into the realm of dark melted chocolate sauces and crispy fluffy ridged tubes of batter. 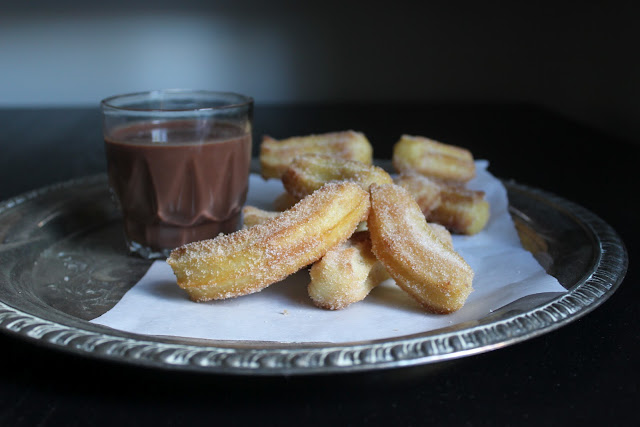 What I found was not any kind of spiritual awakening. I’m sorry if the build-up was misleading, but that’s the truth. What I did find was something else entirely. I found a luxurious, decadent reward for absolutely minimal effort on my part. Donuts with one bowl, no waiting time, and no need for a massive deep fryer. Chocolate sauce is stirred together in the microwave, and voila, a little cinnamon sugar sprinkle and you’re there. The scariest part of the process is squeezing the dough out of a piping bag and snipping it into a small pan of hot oil, but that ended up just being weirdly satisfying and fun. The whole operation made me feel competent, like I was a robot working in a churro factory.  That’d be the life. 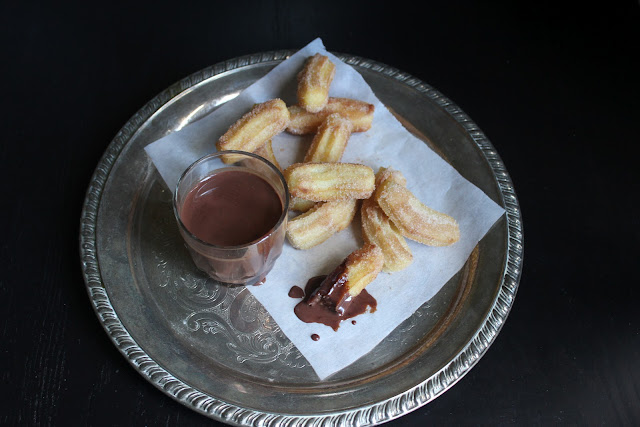 This amount of churros and chocolate is just about right to chase the blues away from two people, and have you dreaming of warm Spanish sun on your shoulders, and views of the intensely blue Mediterranean seas in the distance. If you’re already in a good mood, though, this is probably enough for dessert for four ;). Two people if you’re greedy. Maybe just two people. Let’s just stick with two people. Two, non-enlightened, regular old citizens of earth, having a fantastically good, chocolaty, donutty time, pretending that they are churro robots. Perfect.

First, make the chocolate sauce by combining all ingredients in a small bowl and microwaving to melt and combine, mine took 2 bursts of 25 seconds.

For the Churros, in a shallow bowl or plate pour a layer of caster sugar, and sprinkle over the ground cinnamon, mix with your fingers to combine. Meanwhile, place about 3 cm of canola oil in a small frying pan to heat up, and get out a piping bag with a 1.5cm star shaped nozzle.

While the oil is heating up, combine the flour, baking powder, olive oil and hot water in a bowl and stir to combine into a stiff paste. Scrape up the past and fill the prepared piping bag. To test the oil, squeeze out a small amount of the dough, and snip into the oil with scissors. When it sizzles and turns a light golden brown, the oil is ready. Using the same process, snip longer lengths of dough into the oil and fry until a light golden brown, before removing to some paper towel to drain briefly before being tossed into the cinnamon sugar bowl. Serve the churros warm, with Hot Chocolate Sauce.