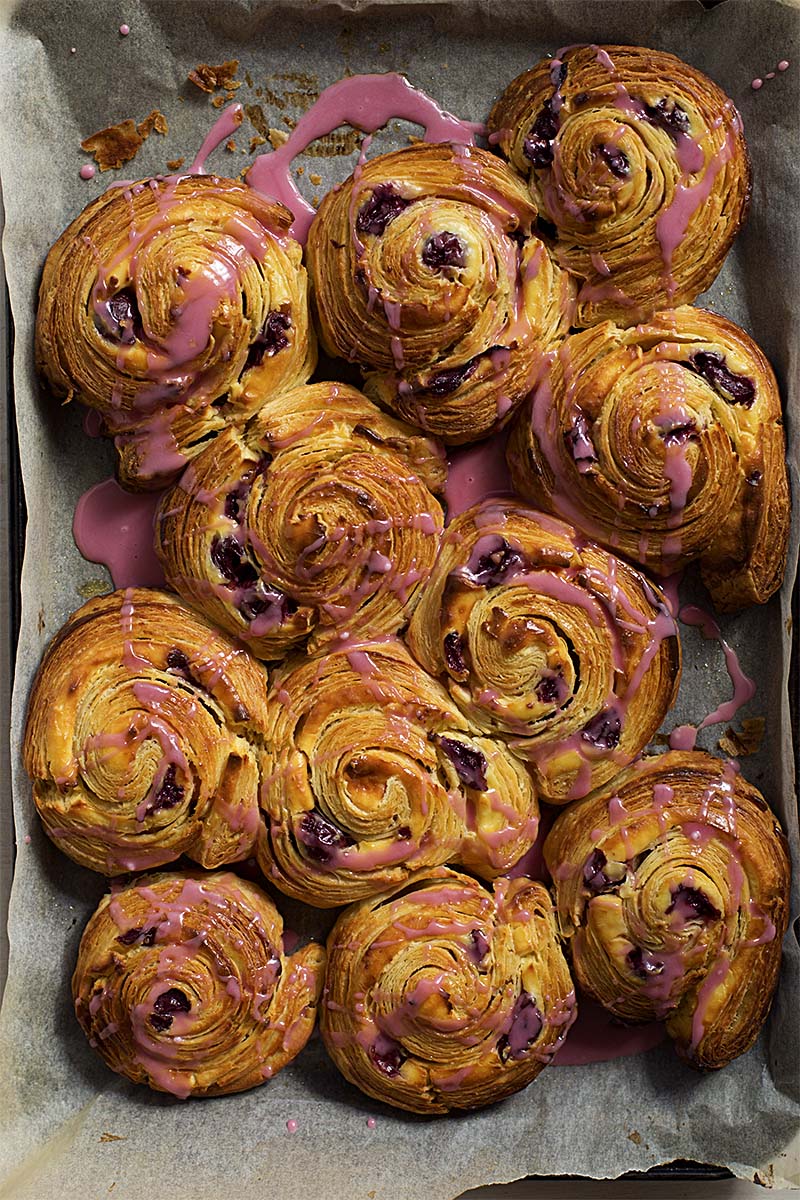 Whorls of buttery dough, flaking and crisp at the edges and buttery and soft at the middle, striated with luscious baked cheesecake and studded with tart cherries: this is the majesty of a cherry cheesecake danish. The idea for this danish is pretty straightforward, it’s inspired by the classic cherry and farmer’s cheese strudel. I incorporated some classic Danish dough for added heft, and to achieve my goal in life; making desserts into acceptable breakfast foods. And thus I created a freaking amazing addition to the Danish canon. One that frankly probably already exists, but I don’t know, because I am too lazy to google it.

What are you too lazy to google? My list is long. I’m too lazy to google ‘what to do if I didn’t receive a Census form?’, and ‘who will come and collect my bombed out old car?’ (it’s been months and it’s still just parked under my house – I am the worst). I’m too lazy to google ‘how to make ghee’ and ‘how to sew on a button so that it won’t fall off the same day’. I’m far too lazy to google anything like ‘why do people like Ben Affleck?’ because I believe some things really should just remain a mystery. But although I am too lazy to whip out my phone for five seconds and do any of these things, I am strangely not too lazy to make Danish dough. 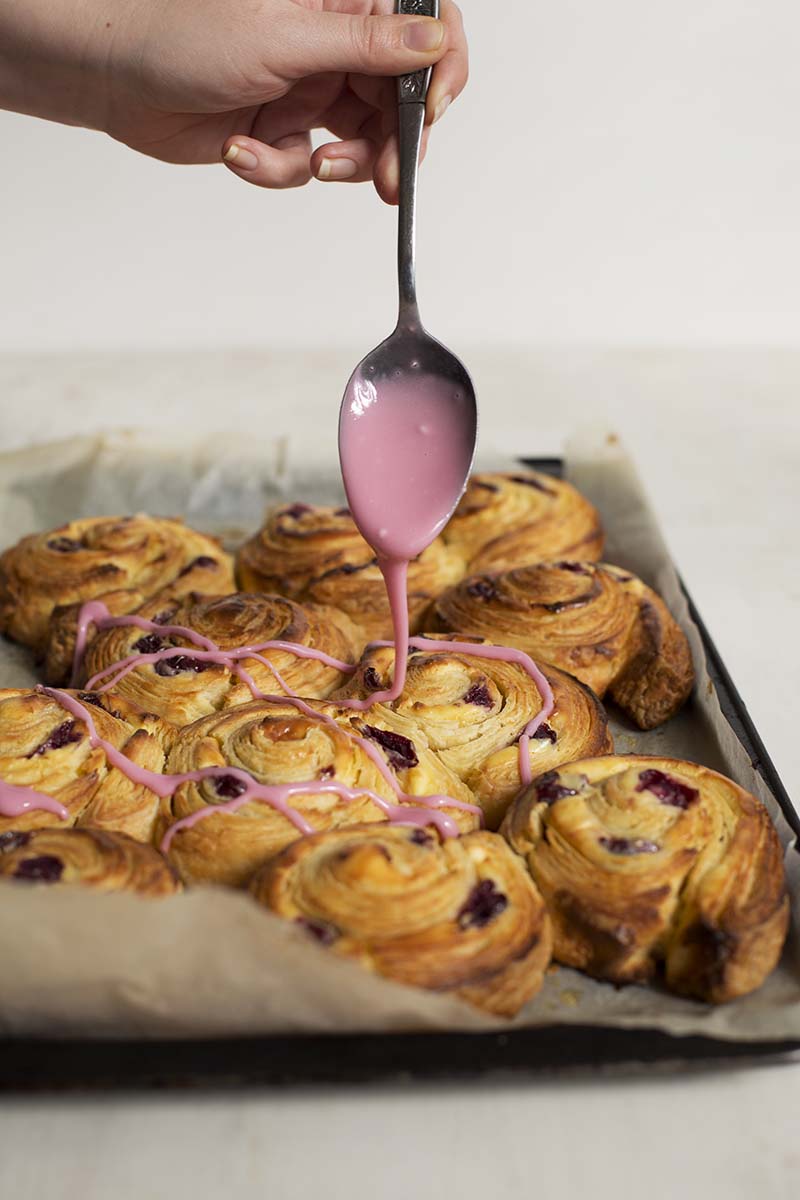 To be fair, this isn’t a classic Danish dough, it’s a cheat’s version popularised by Nigella Lawson, and created by Beatrice Ojakangas. The main difference is that the butter goes into the dough in chunks, as opposed to being incorporated in a large block, and then rolled out. The results are indistinguishable from one another, though the method is a lot easier. What you do is just make up a simple dough with flour, egg, milk, yeast, sugar, salt (aka salger), and LOTS of butter. Then, the next morning, you roll the dough out into a large square, sort of squashing those chunks of butter as you go. Then you fold up the square like a business letter and roll it out again, which eventually traps the butter between layers of dough, giving you those classic flaky danish layers.

After that I spread a layer of easy lemon-scented cheesecake mixture over the dough, dot it with drained morello cherries and rolled it up like a swiss roll. When these spirals of dough bake, they puff up and the layers become gorgeously visible. What you get is the perfect ratio of crispy-creamy-soft in each bite, aka freaking heaven. Get them in your life! 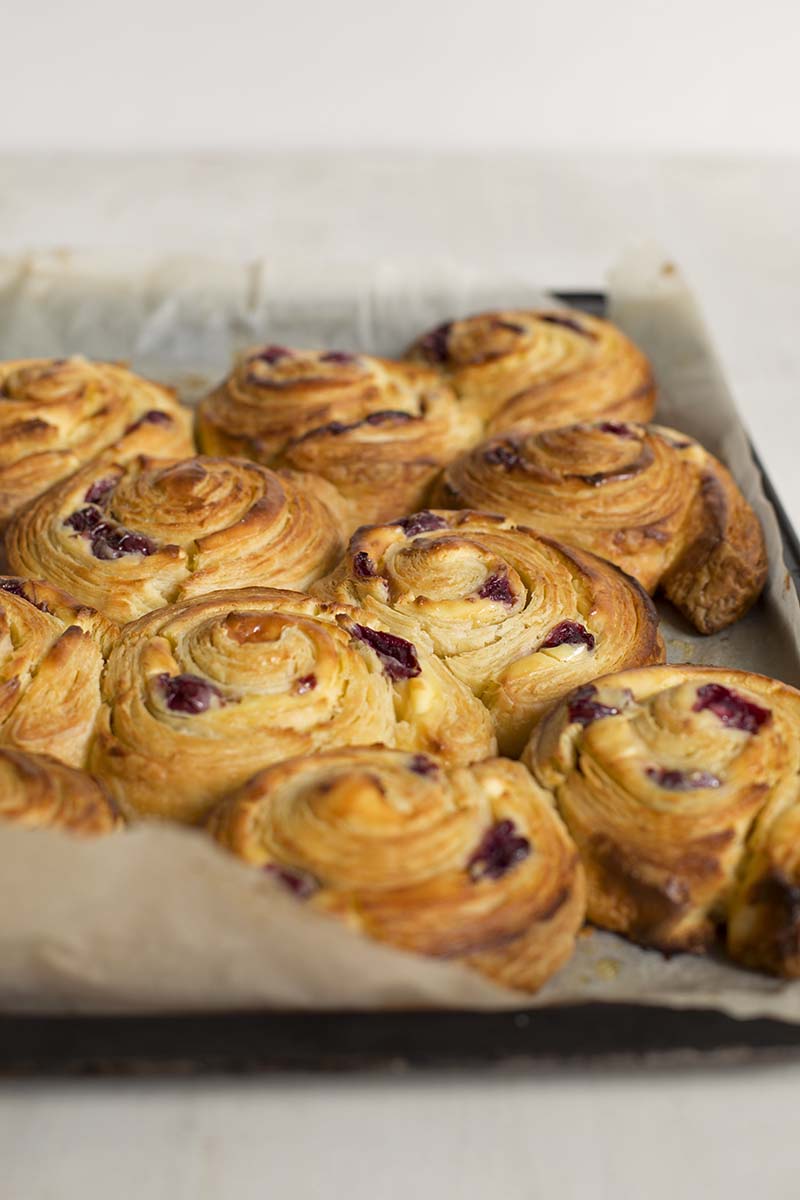 Cherry Cheesecake Danish aka Fat-Pants Swirls
Print
Author: Sarah Coates
Serves: 12
Ingredients
For the pastry:
For the filling:
For the icing:
Instructions
3.5.3208