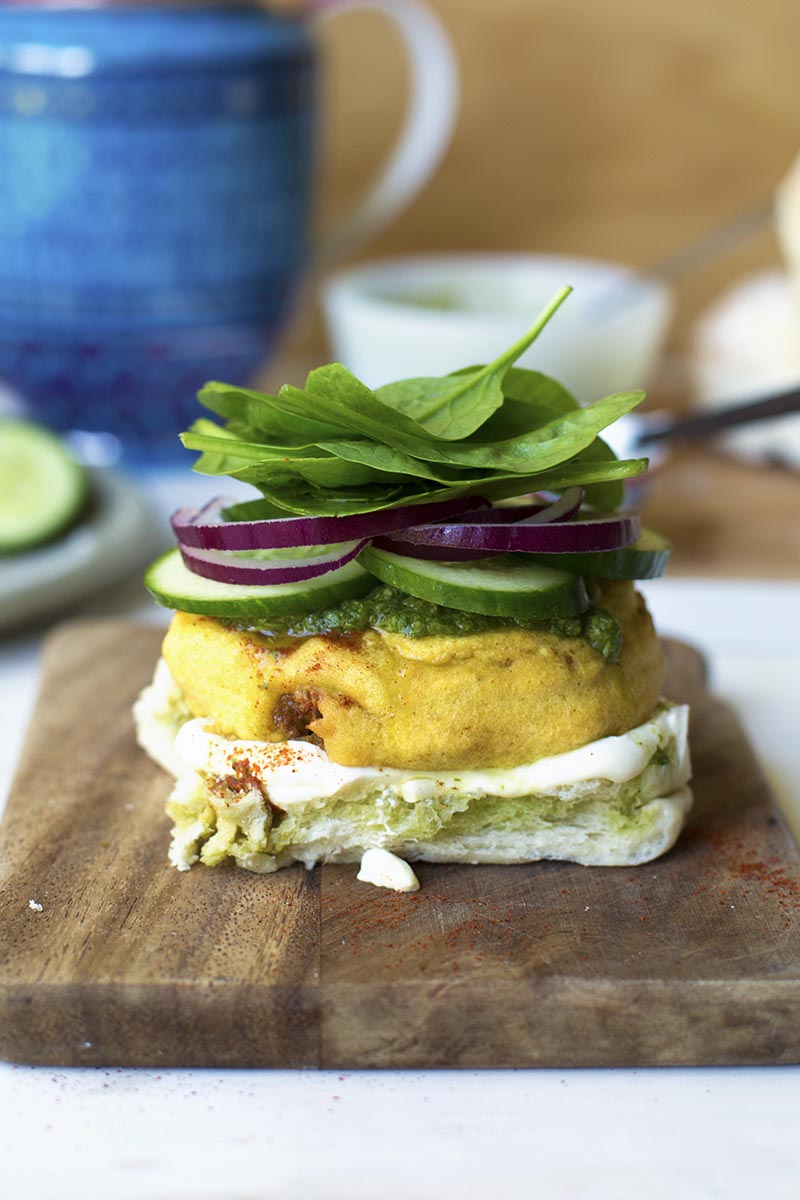 Crunchy, spiced potato patties, coated in a chickpea batter and fried. Crunchy, soft, spiced, punchy and comforting all at once, tucked into a white bread roll and topped with spiky coriander chutney and a scattering of chilli powder. The Vada Pav is a classic Mumbai street food, and as a huge fan of anything with a double carb element, I have absolutely no difficulty seeing why.

One of my favourite, favourite things in this world to eat, which I rarely do, is a Chip Butty. That’s a chip sandwich if you’re not from Australia or Britain or maybe New Zealand. The ‘butty’ part is a contraction of bread and butter, according to Wikipedia, but whatever. The only important thing is that this is one of the few foods which crosses over from the land of bland, unadventurous foods that kids like, into the land of things I still actually enjoy as an adult. Because come on; buttered bread? Crunchy fried potatoes? The texture, the taste, the experience, it’s all so good. 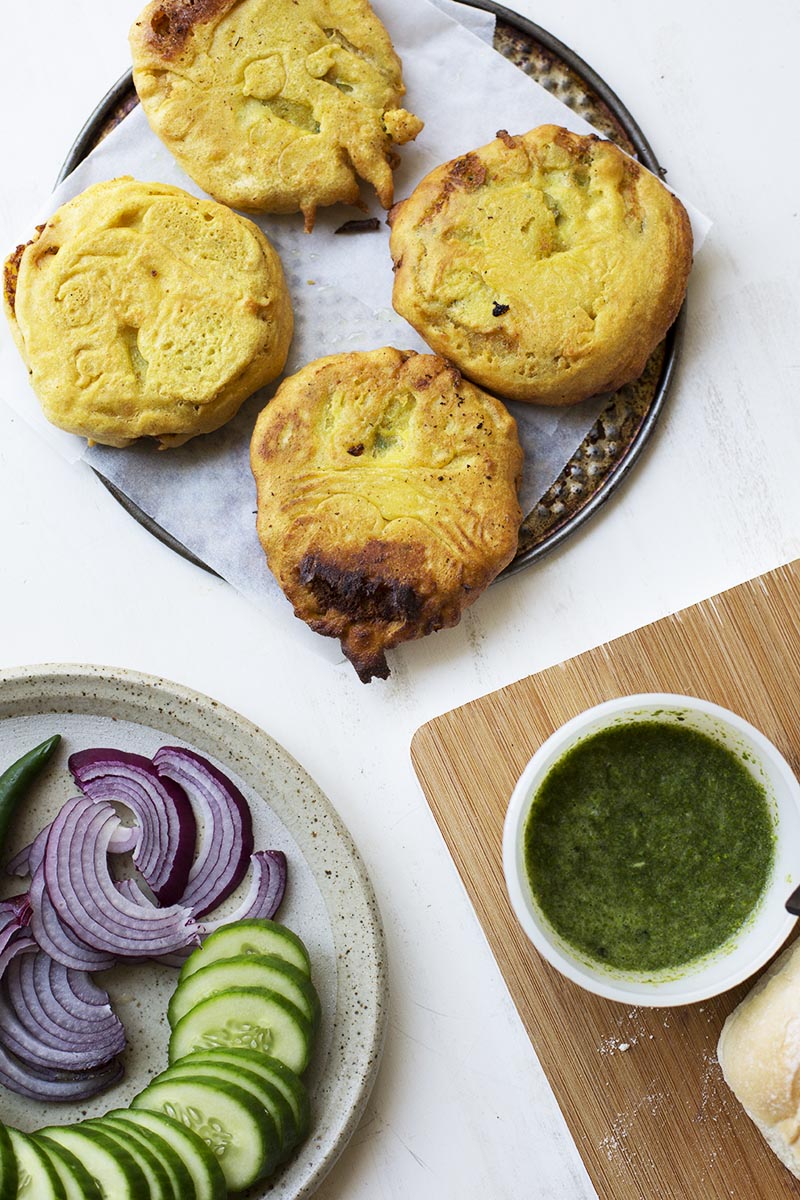 Just a short trip halfway around the world from the Sunshine Coast beach holidays of my childhood, are the streets of Mumbai, which I have never visited. It’s easy to conjure up the stereotypical picture of India, hot, steamy, crowded, colourful, vibrant and oh so different to the streets of my town. But it is cool to see that we both share a love for potatoes on bread. We’re all so much more similar than we are different. 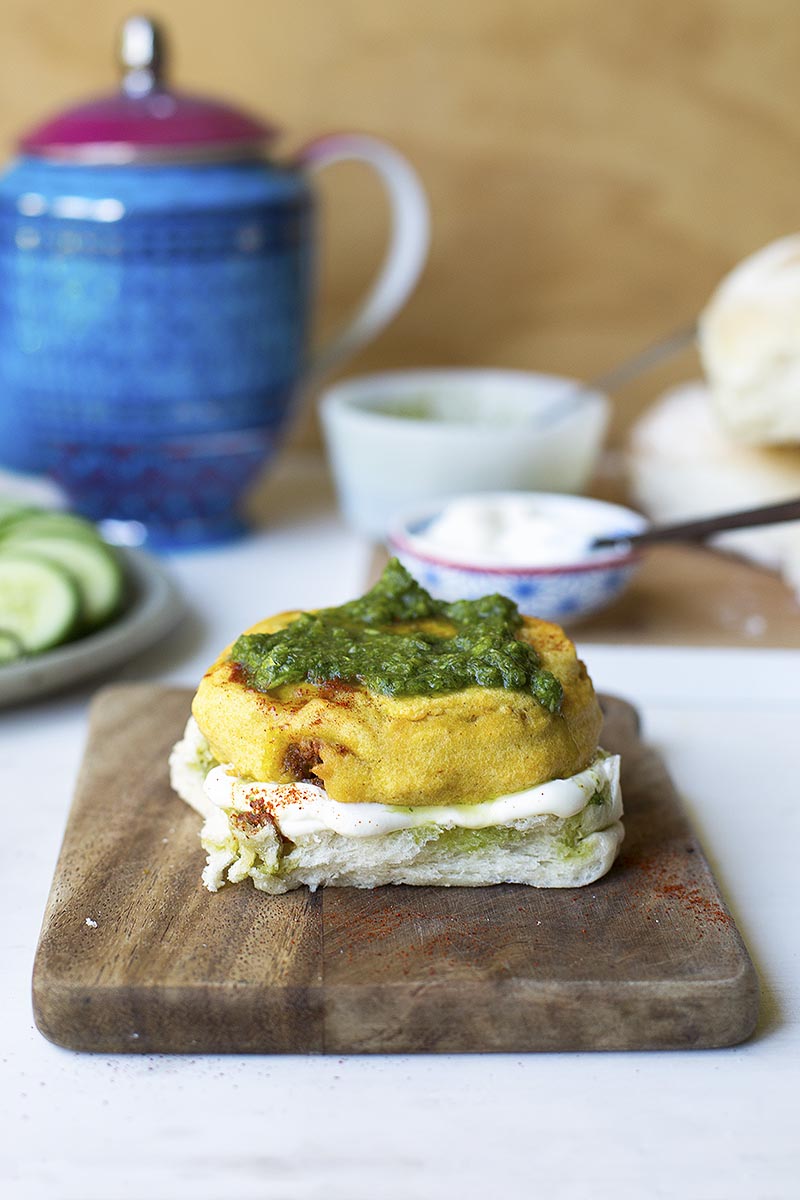 To be totally fair, a Vada Pav is a Chip Butty on steroids. It’s the truly adult version, full of fresh green chillies, punchy garlic and ginger, mustard seeds, coriander and cumin. The batter outside is crisp and savoury and so satisfying to crunch into and hit that spiced filling. The coriander (cilantro) chutney that goes on top stops this sandwich from being overwhelmingly stodgy (ahem, sorry Chip Butty), and punctuates each bite with some freshness. And what’s more these are totally vegetarian, and easily vegan if you use a coconut yoghurt, and an egg and dairy-free bread.

Since this is my idea of a Vada Pav, and as usual, I make no authenticity claims having never had a real one, I added a dollop of yoghurt, which I don’t think is traditional. I also bailed on making the other two kinds of chutneys which I’ve seen served with these, because I’m not a chutney factory. Instead of the dry red chilli chutney, I just added a fat pinch of Kashmiri chilli powder to mine, but by all means google it and make some, or go to your local Indian market and buy some. 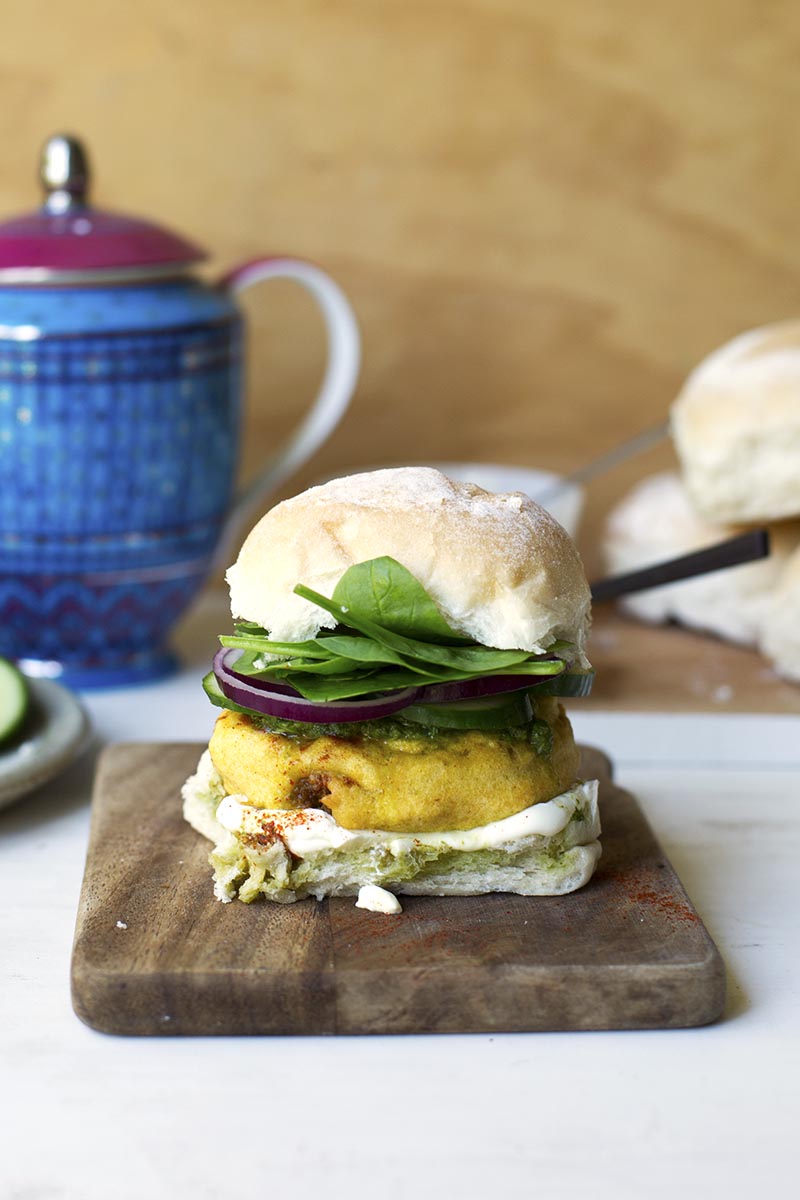 I also secretly think that these would be at their most crazily delicious on the brunch table. Can you imagine, these topped with some garlicy sautéed spinach or kale, and a soft poached egg on top, drizzled with that bright green chutney? People are gonna be talking about that brunch for a while. And speaking of brunch, I have to go research where to eat my precious weekend meal at for the next four hours or so. Have a killer weekend lovelies!