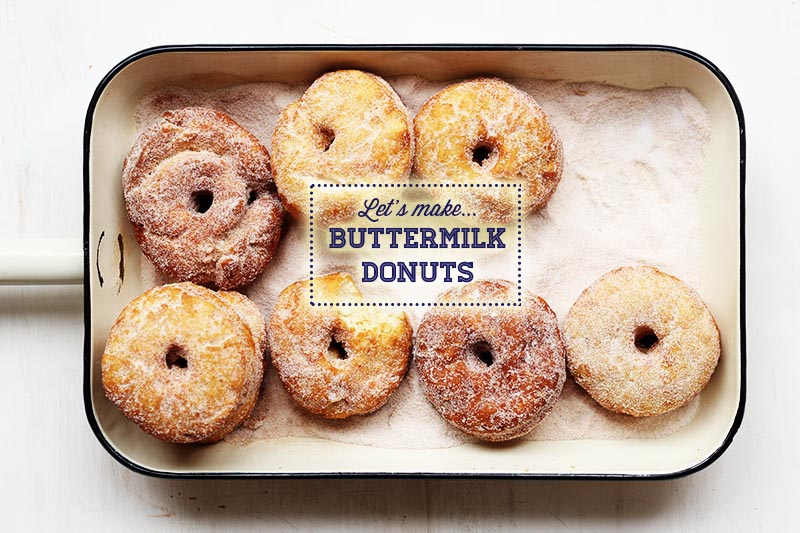 Whether it’s just too crazy hot, or you’re stuck in a blizzard, or it’s tropical storming like nobody’s business, sometimes the only thing left to say is ‘let’s make buttermilk donuts’.

And the only thing to do after you’ve said that is…to make them! Which, let’s face it, is a great little project, especially if you’re stuck inside the house for whatever reason. Also, because donuts. 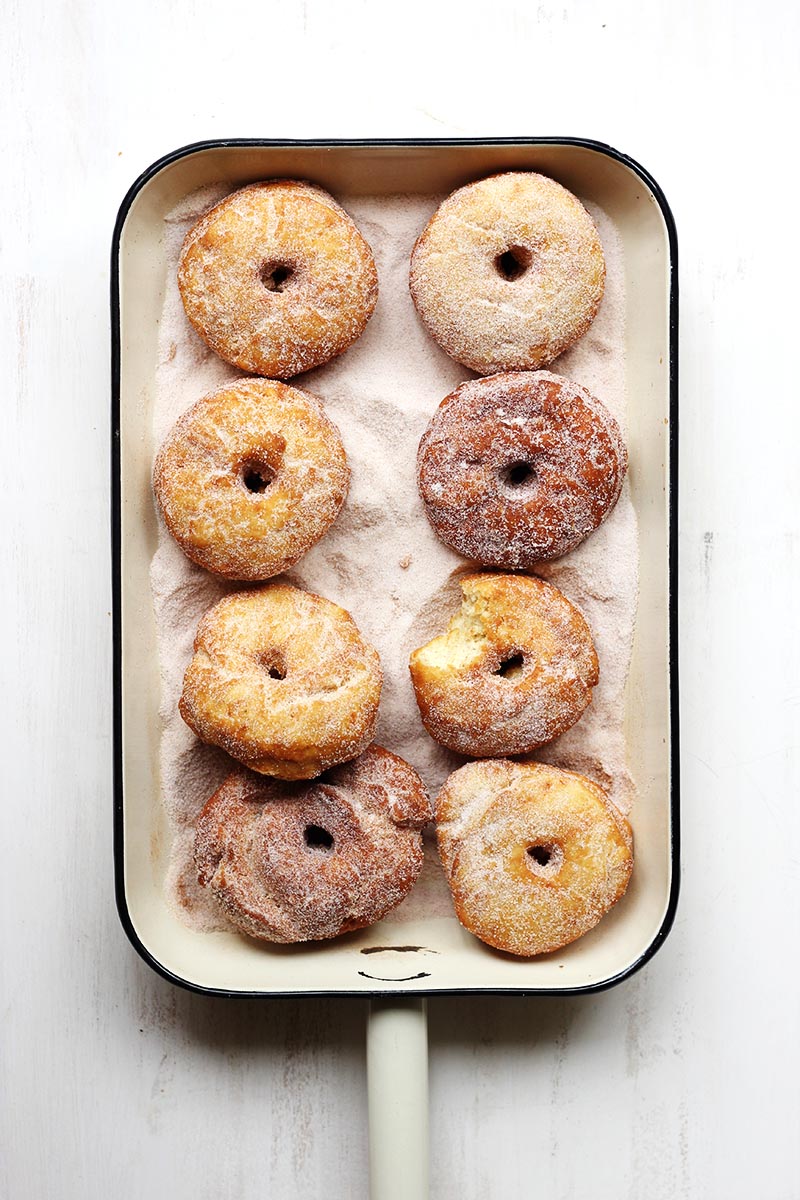 These buttermilk babies are exactly what all those cheat’s recipes for donuts made out of canned biscuits (aka weird canned scones if you’re in Aus or the UK) are SUPPOSED to taste like.

Super light, deliciously spiced, and absolutely at their best when eaten still hot, as you pass them from hand to hand, and get that gritty-sweet cinnamon sugar all over your mouth. They’re crazy-easy to pull together. 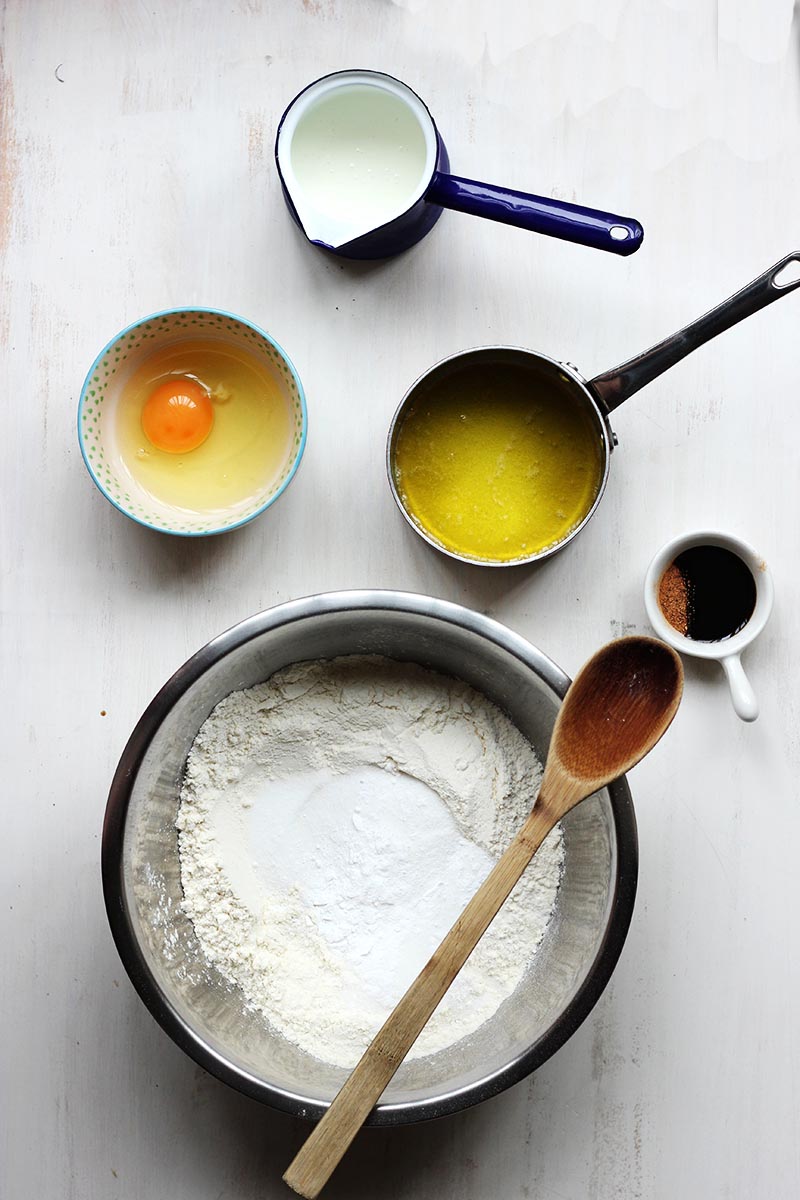 Flour, a little sugar, and some leaveners go into a bowl. And I find it helpful to get everything else out first as well – so that means an egg, some buttermilk, a little melted butter, and some spices.

Now’s a good time to think about deep-frying too. I love to use grapeseed oil, but any oil with a high smoke-point will do. Remember to use a good sturdy pot, never fill it more than a third full, and keep it on one of the back burners away from the edge. Also, invest in a sugar thermometer, and use that to check your oil temps. 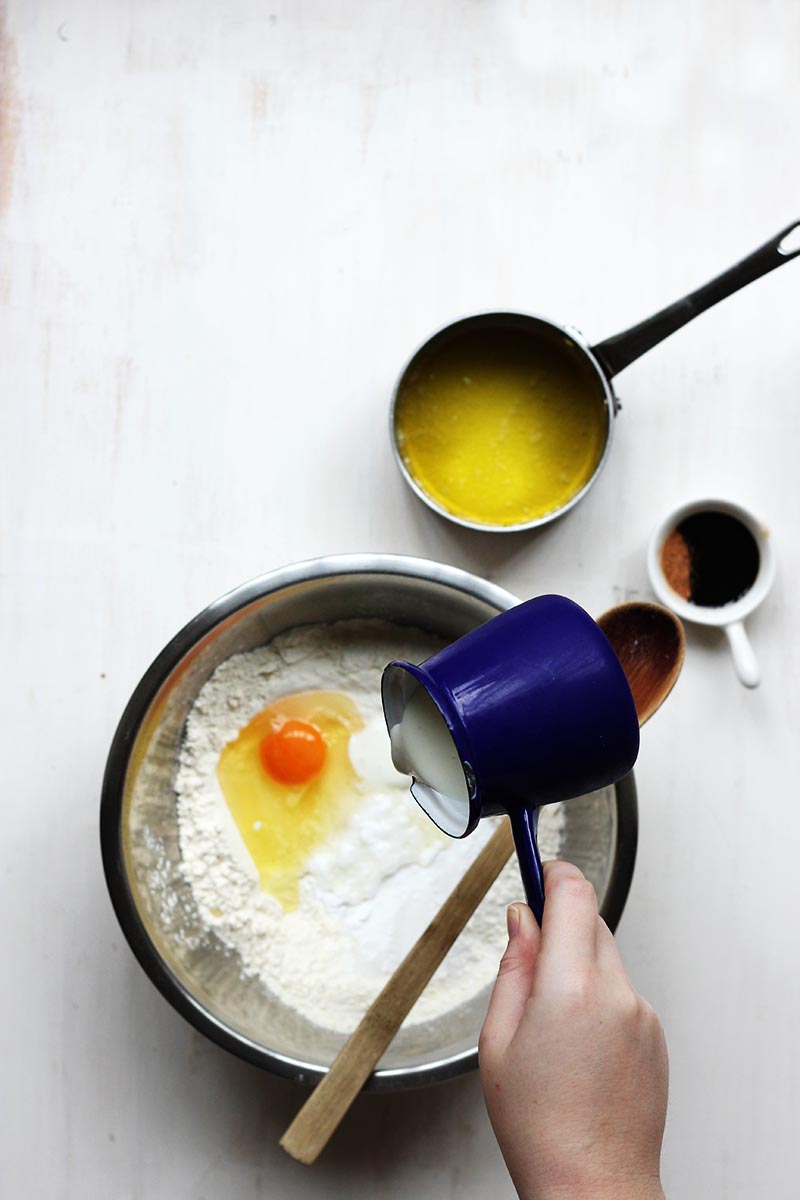 Anyway, so the egg, buttermilk, butter and spices (vanilla, cinnamon, nutmeg) go into the bowl, and everything gets stirred together with a wooden spoon, and then finally brought together with your hands.

Flour your work surface lightly, and then pat the dough out to just under an inch thick (2 cm) and use a 2 1/2 inch (7cm) cutter to stamp out as many donuts as you can, re-rolling as needed. I use the 1/2 inch (1cm) tip of a piping nozzle to stamp out the holes. 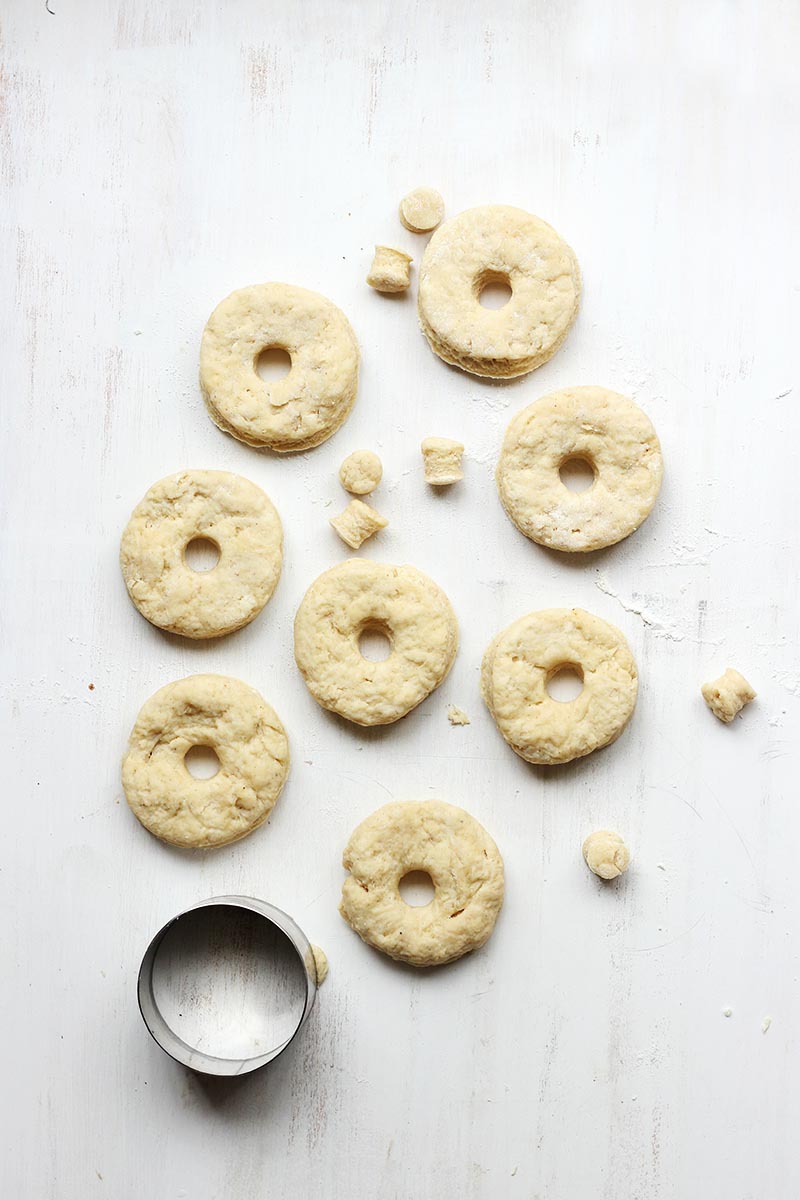 From there, it’s into the oil with these darlings! That’s the good thing about a buttermilk donut, no hanging around waiting for the yeast to do it’s work. When you’re frying, make sure to keep the temperature steady – not too high – and be careful not to crowd the pan.

Once the do’s are cooked, I like to drain them on a rack (as opposed to paper towels, which make things oh-so-soggy) and then throw them straight into a trough of cinnamon sugar. 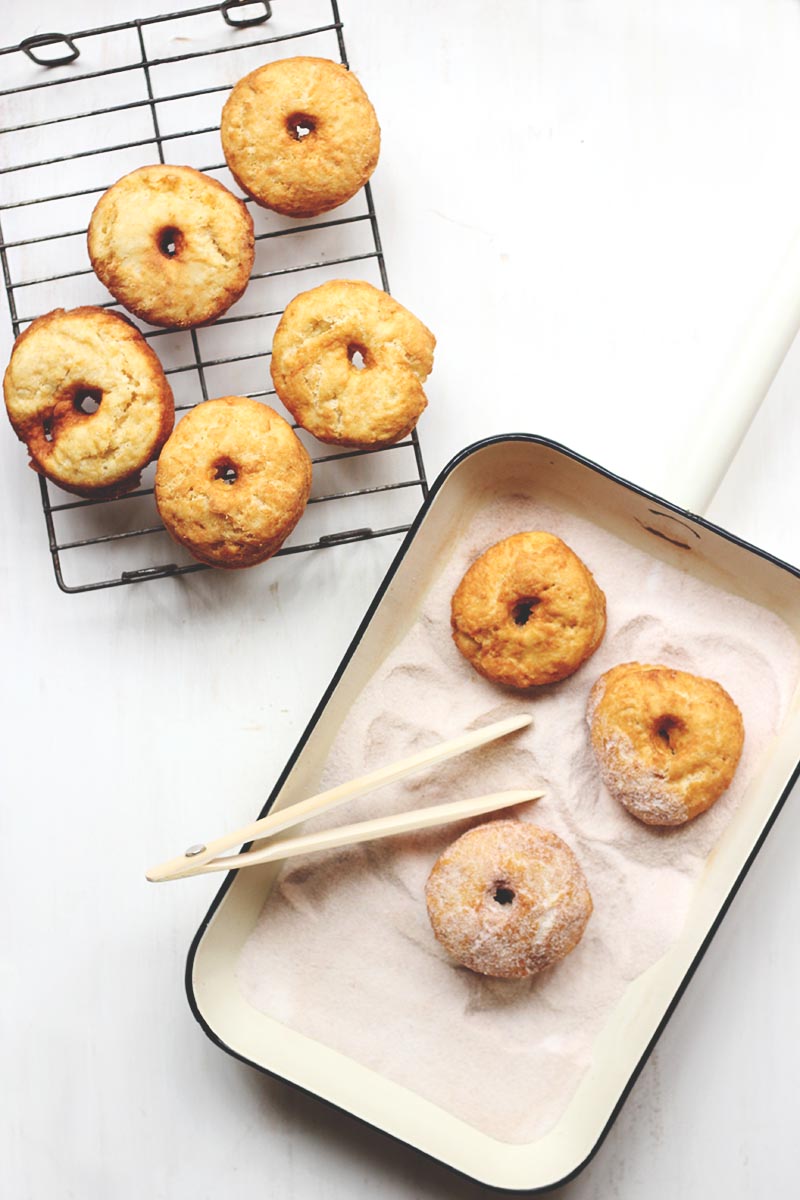 Eating hot cinnamon donuts at the shopping centre after school is such a vivid memory of my childhood. Of all the donuts at the donut store, there was none that I wanted more than a hot cinnamon donut. I just loved watching that crazy robot-machine pop the rounds of dough into the hot oil, and then flip them and then slide them down, to be quickly tossed in sugar and handed over to us.

I burned my fingers and my mouth on those donuts as a kid, eating them too soon. And I did the same for these ridiculously tasty rounds. And I regret nothing. 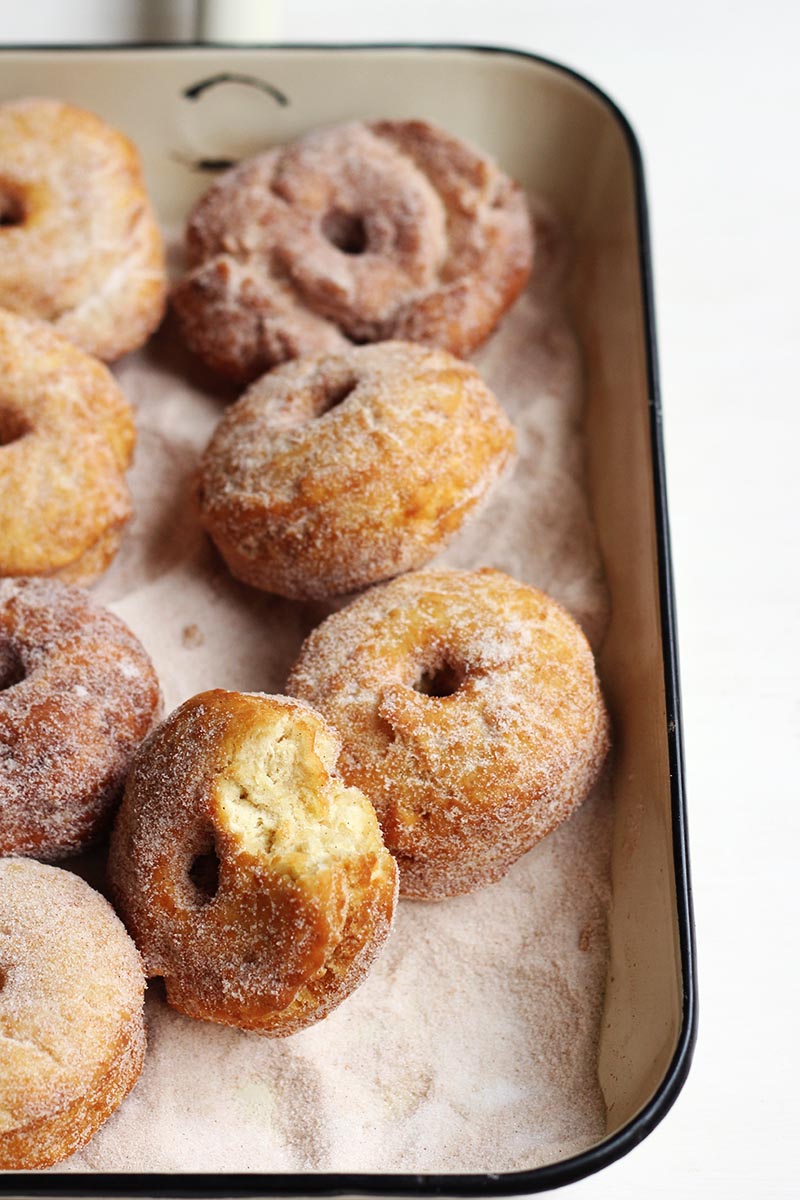 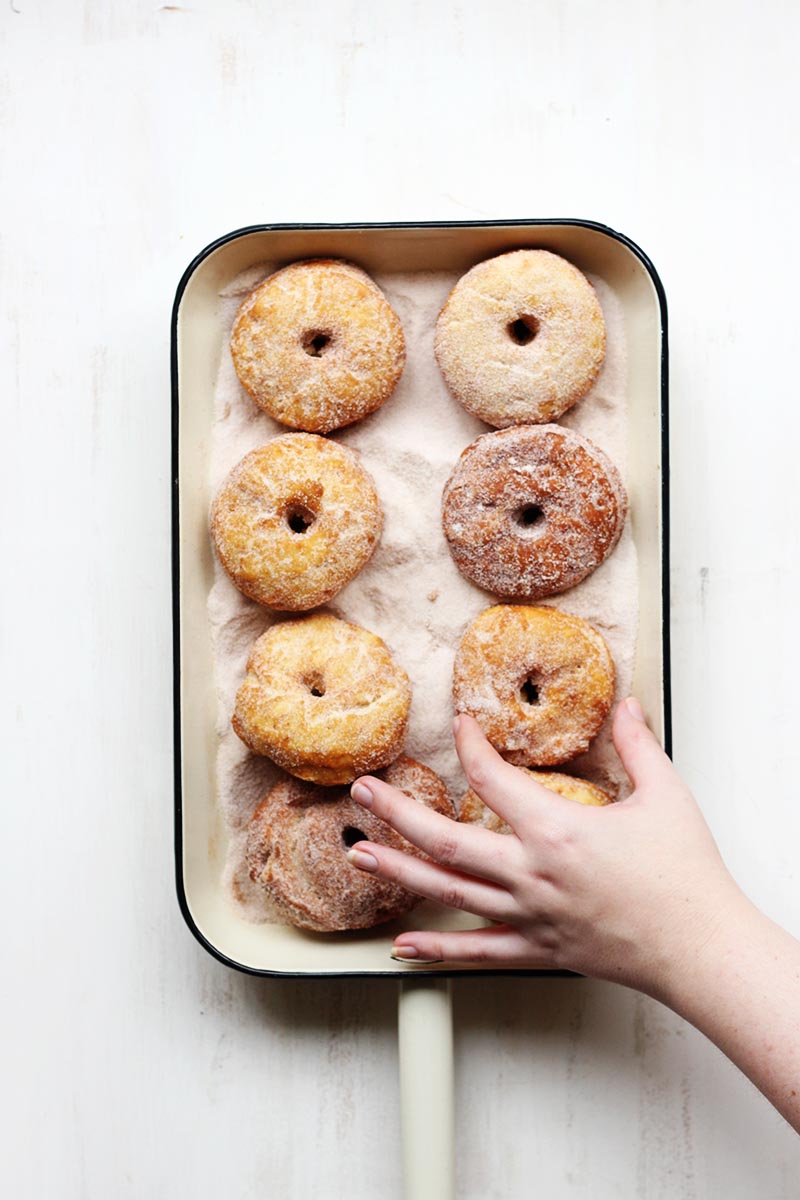