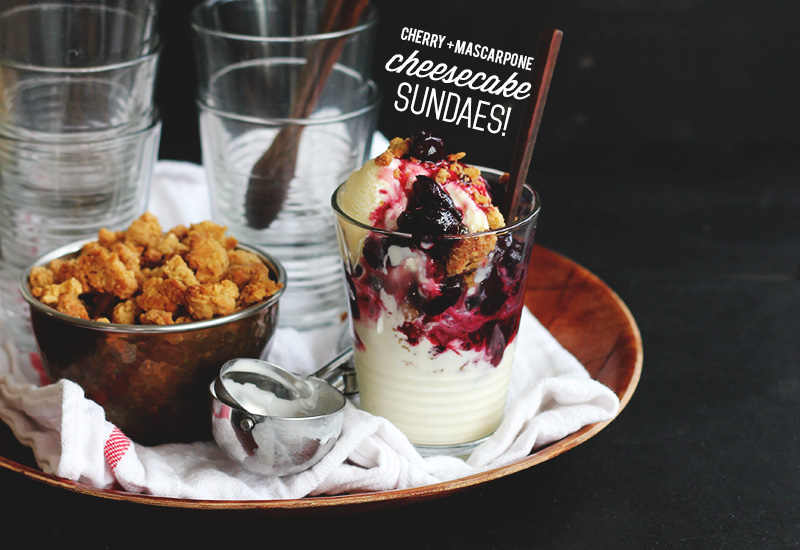 It’s become clear to me that most of my favourite things to eat are just ‘assembly jobs’. You know what I mean? Dishes which are just a pile of other, smaller delicious things. Take sandwiches, for instance; just a stack of tasty other stuff, between two slices of bread.

Or, for another delicious example, this sundae. 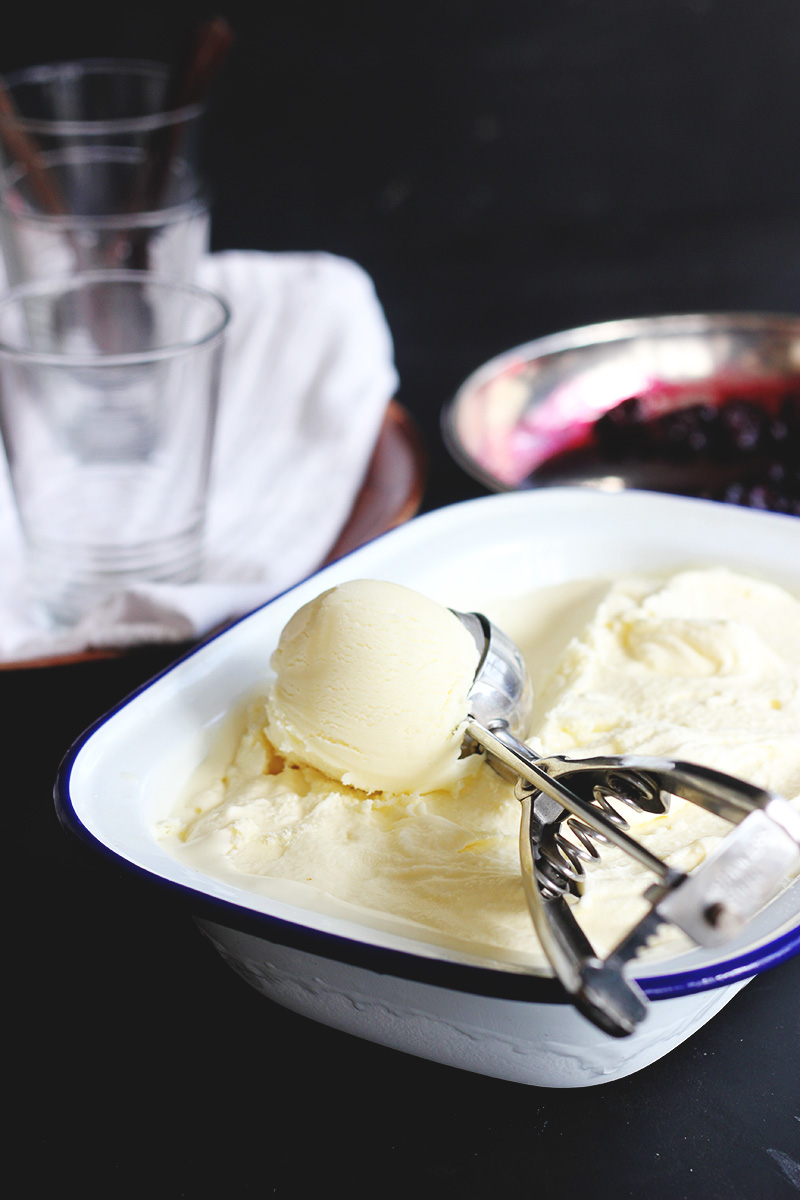 But DAYUM, this ice cream is where it’s at! The mascarpone gives it a complex creaminess, with just a slight tang. It’s the creamiest ice cream I’ve ever had. 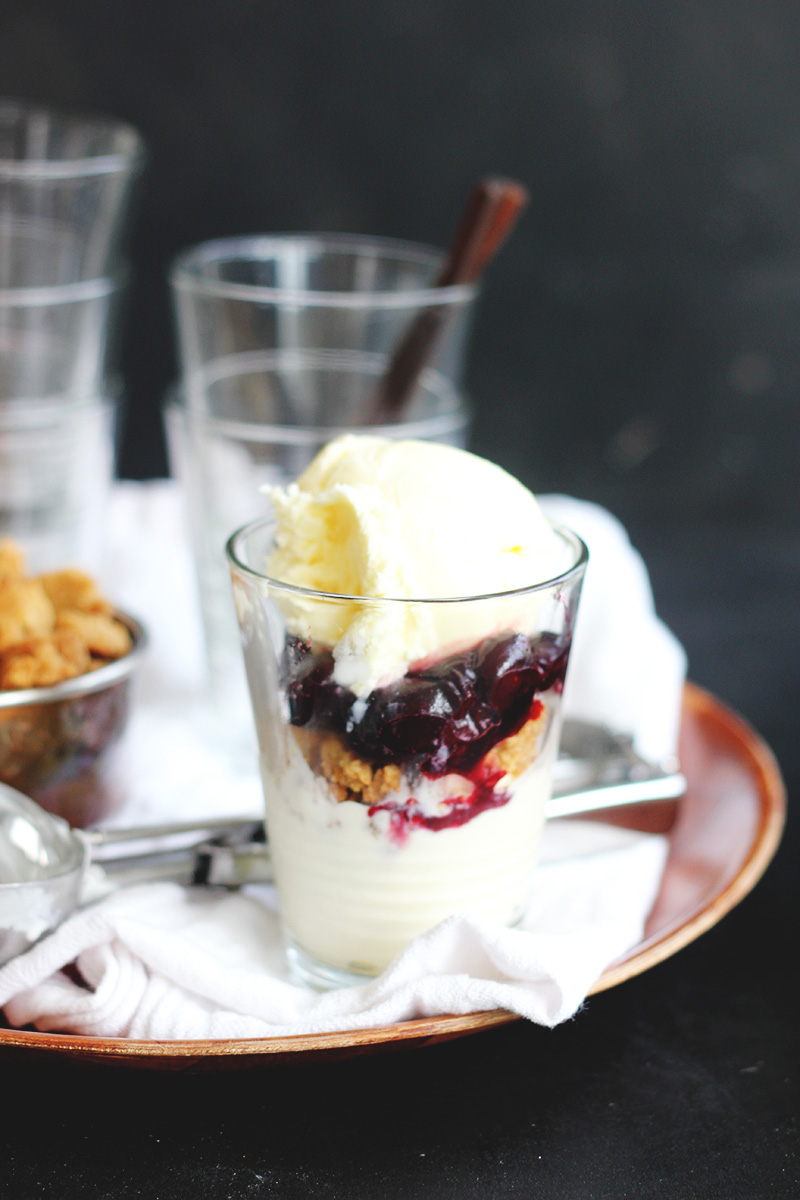 The biscuit-base element in this recipe is provided by a super-simple brown sugar crumble. It’s got three ingredients, one bowl, and no fancy equipment. It’s my go-to crumble, actually. Strewn over fruit and baked, it’s lovely.

But when baked on it’s own, as in this recipe, it becomes a super versatile element of buttery crunch for any dessert. It’s one of those endlessly useful little extras to have in the kitchen. 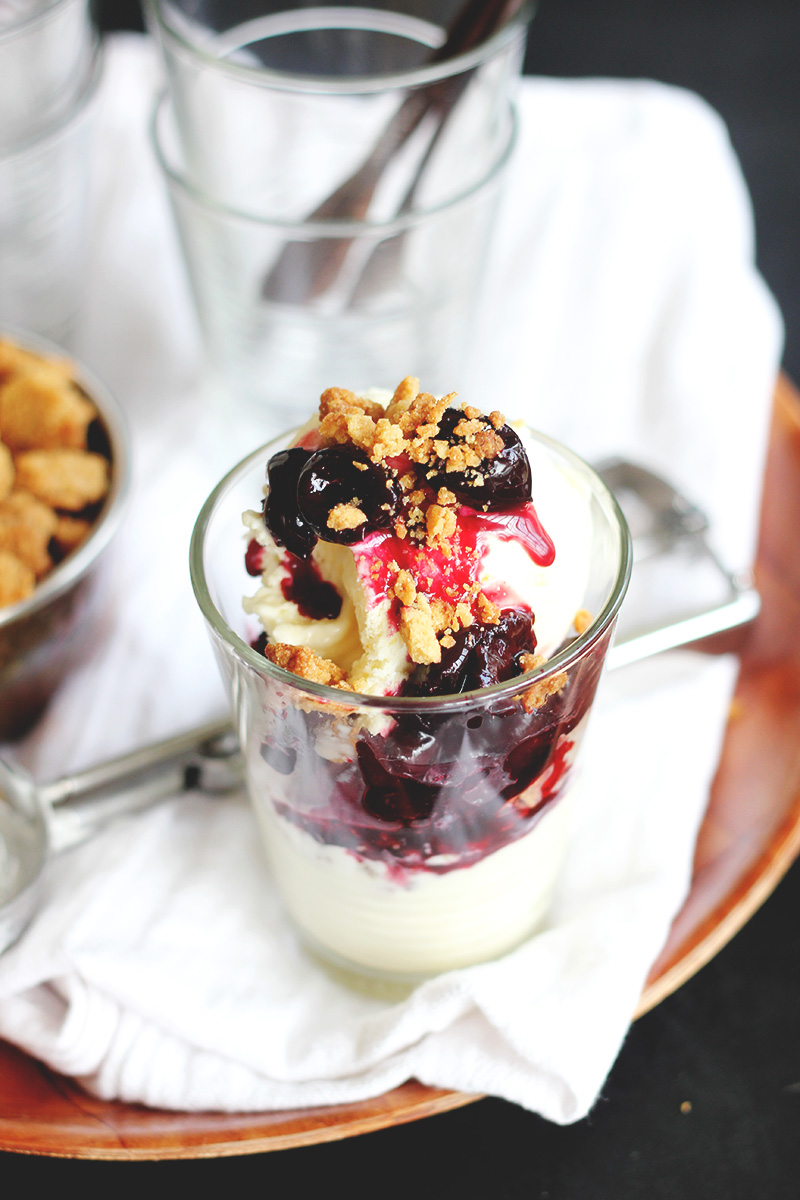 The cherries could really be replaced by any fruit, I’ve since made this with both blueberries and plums which were both lovely. But cherries are a particularly good choice, because they have a strong sweet-tart flavour, and can really stand up for themselves in this mix.

I like to help my cherries along with a splash of brandy, but that’s only because I have it in my kitchen. A little vanilla or rum, or even bourbon would be great too – or nothing at all! 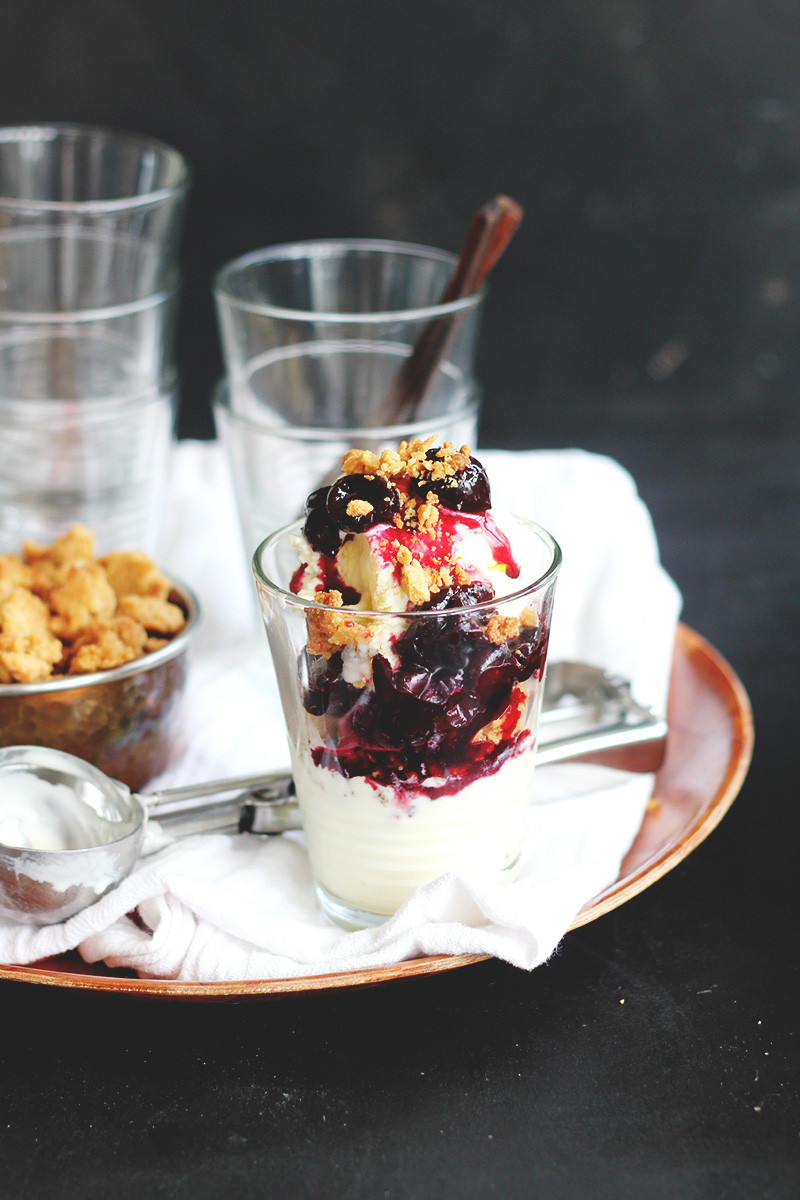 What I like about this dessert most of all, is it’s unfailing ability to make everyone’s eyes light up. Nobody can resist a sundae, they’re the best! 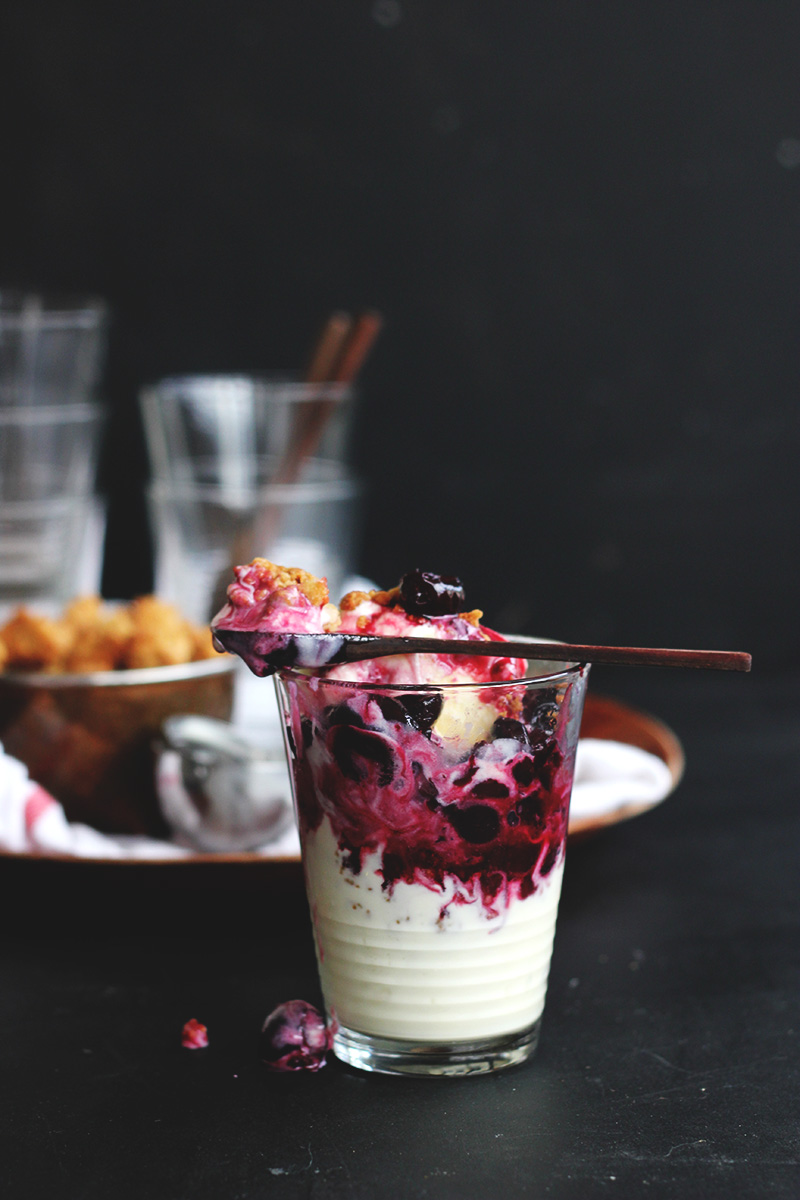 Cherry & Mascarpone Cheesecake Sundaes!
Print
Mascarpone ice cream, sauteed cherries and brown sugar crumble make for a completely delicious, cheesecake sundae! This makes plenty of ice cream and crumble, and enough cherries for 4 sundaes.
Author: Sarah Coates
Ingredients
For the mascarpone ice cream:
For the crumble:
For the cherries:
Instructions
Notes
The ice cream and the crumble both store well, and can be made ahead of time, so you can whip out an epic sundae whenever you want!
3.2.1311 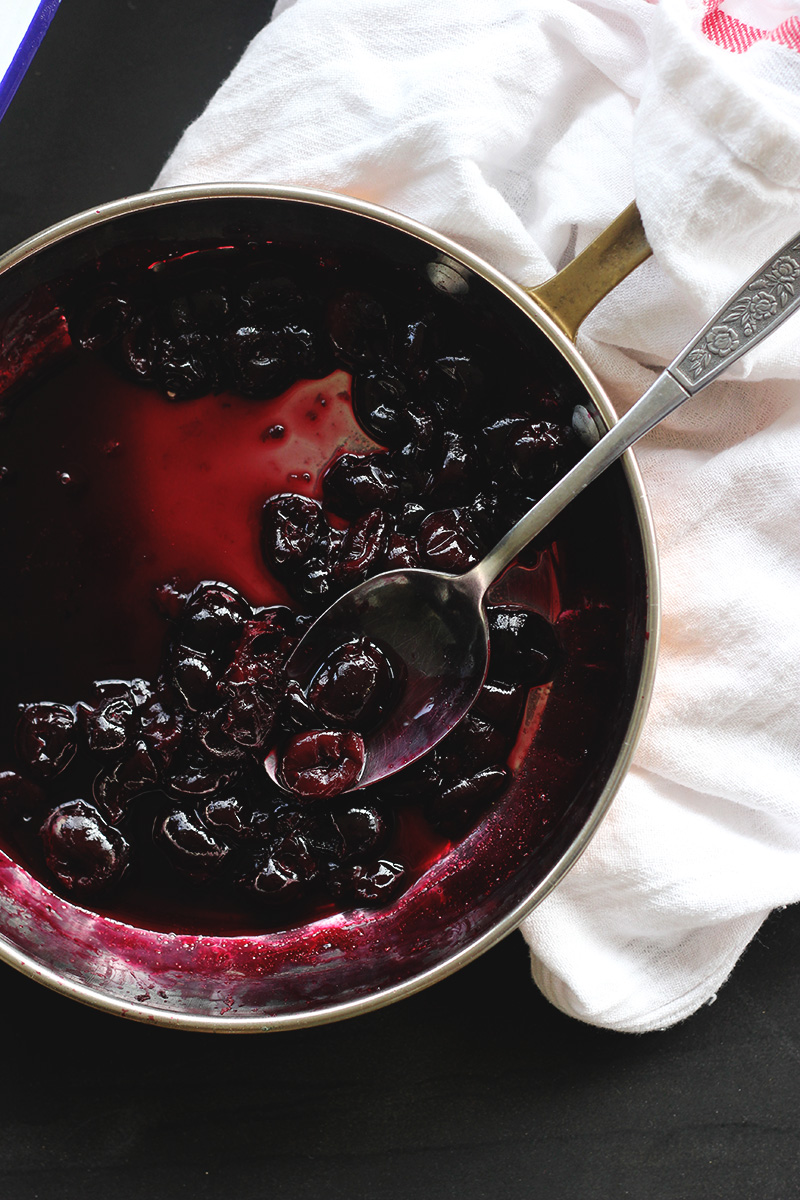