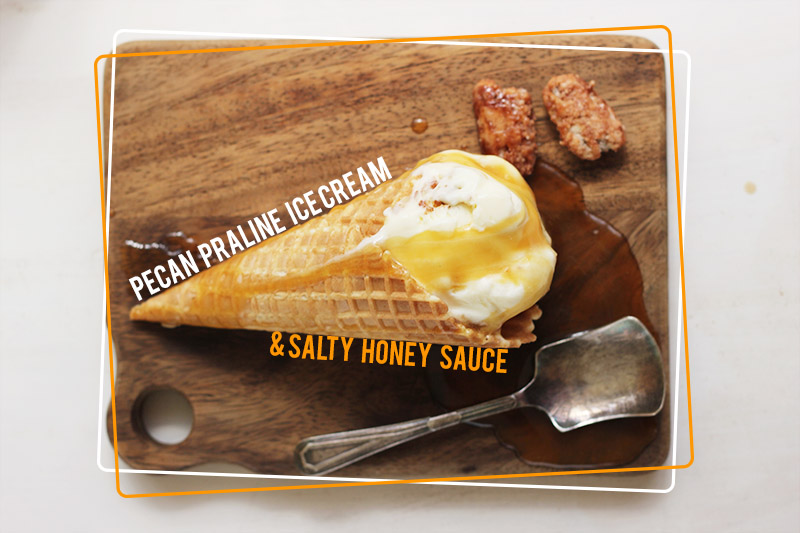 How the hell are you, my creamy friend? Gosh, I’m sorry it’s taken me so long to write, but you know how things are. One minute the whole internet is shaming you into doing a juice fast, the next minute you’re shotgunning a can of Pringles. Sometimes it’s hard to prioritise. But I am truly apologetic for not prioritising you. 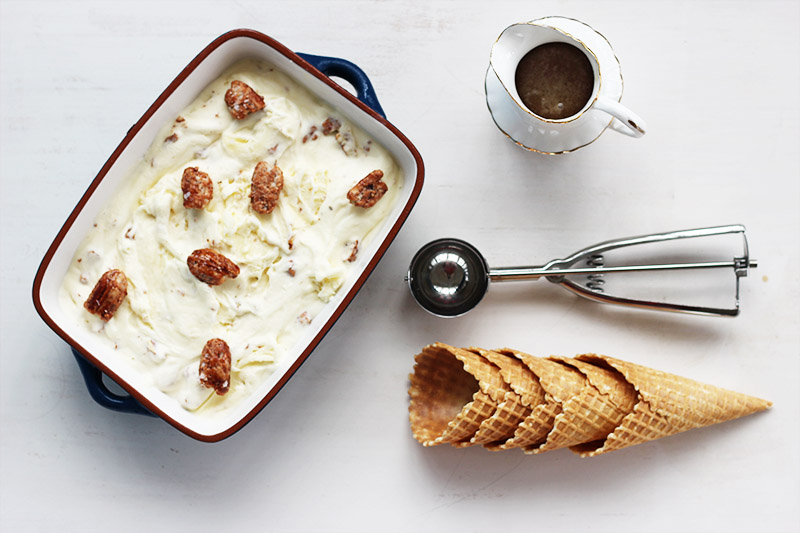 How could I forget such an old friend? Remember when we used to hang out all those years ago? You used to come in ‘rainbow’ flavour. Man, I loved that rainbow flavour. It was irresistible to me, a truly great illustration of how we eat with our eyes, because if I recall correctly even though you looked like a rainbow, you were vanilla flavoured.

It didn’t matter though, because in my head, I was eating a rainbow. And I had seen Hook enough times to know that that was awesome. 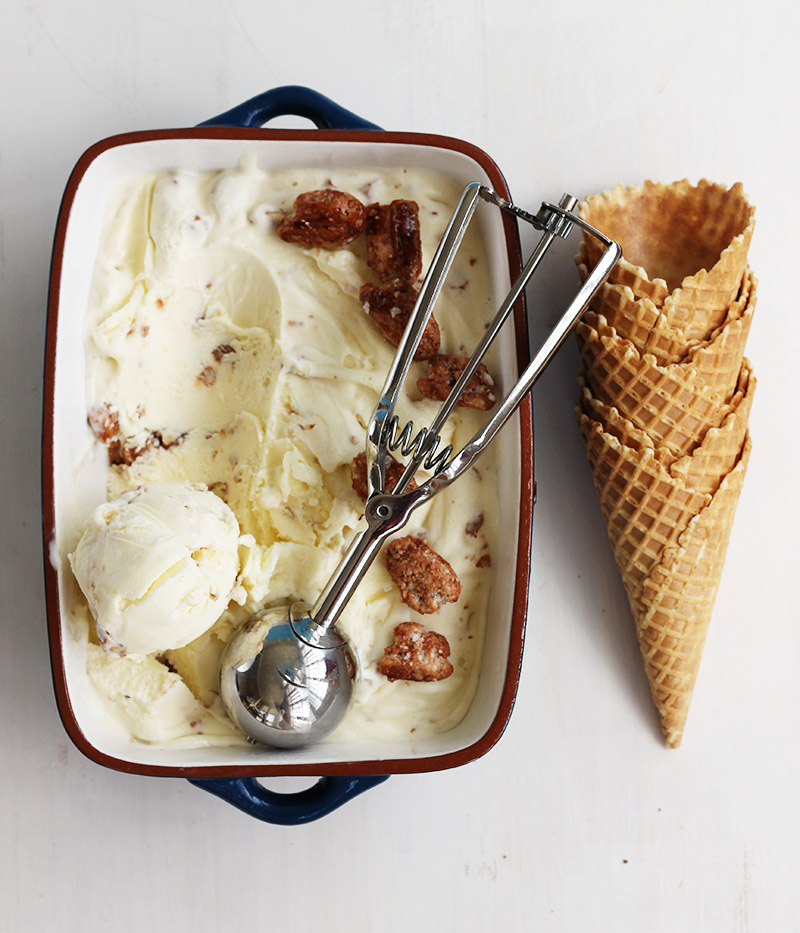 Oh sweet ice cream, I’ve seen you grow and change so much over my 23 years. Why, I’ve seen you go from something that we used to buy in the supermarket in 3 litre tubs of ‘Neapolitan’ (strawberry: rejected), all the way to small-batch artisanal tubs that cost as much as an over-worked cocktail in a riverside bar.

I’ve seen ice-cream parlors go from those places that sold ‘rainbow’ along with hotdogs and milkshakes, to the 32 flavour shops and ‘mix-in’ peddlars, to the swanky gelato bars and specialist producers. Wow, you’ve come a long way good buddy. 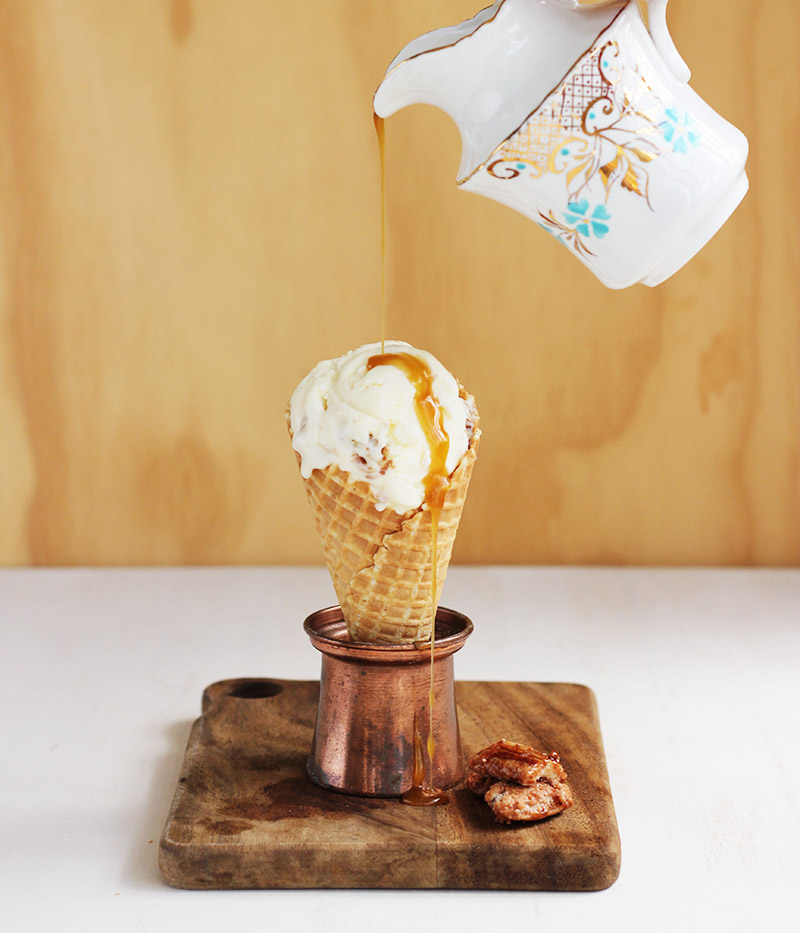 I’m so glad we’re back in each other’s lives. Ever since I saw you hanging out with Megan, I’ve been like ‘I have to spend some more time with ice cream! I should look that fool up!’.

And I’m so glad I did – no longer do you require like 50 egg yolks (what did you think I would do with the whites? I can’t eat all that meringue!), you’re different now. And ice cream makers – I guess I should say ‘you-makers’ – are so much more affordable and easy to use than they used to be. 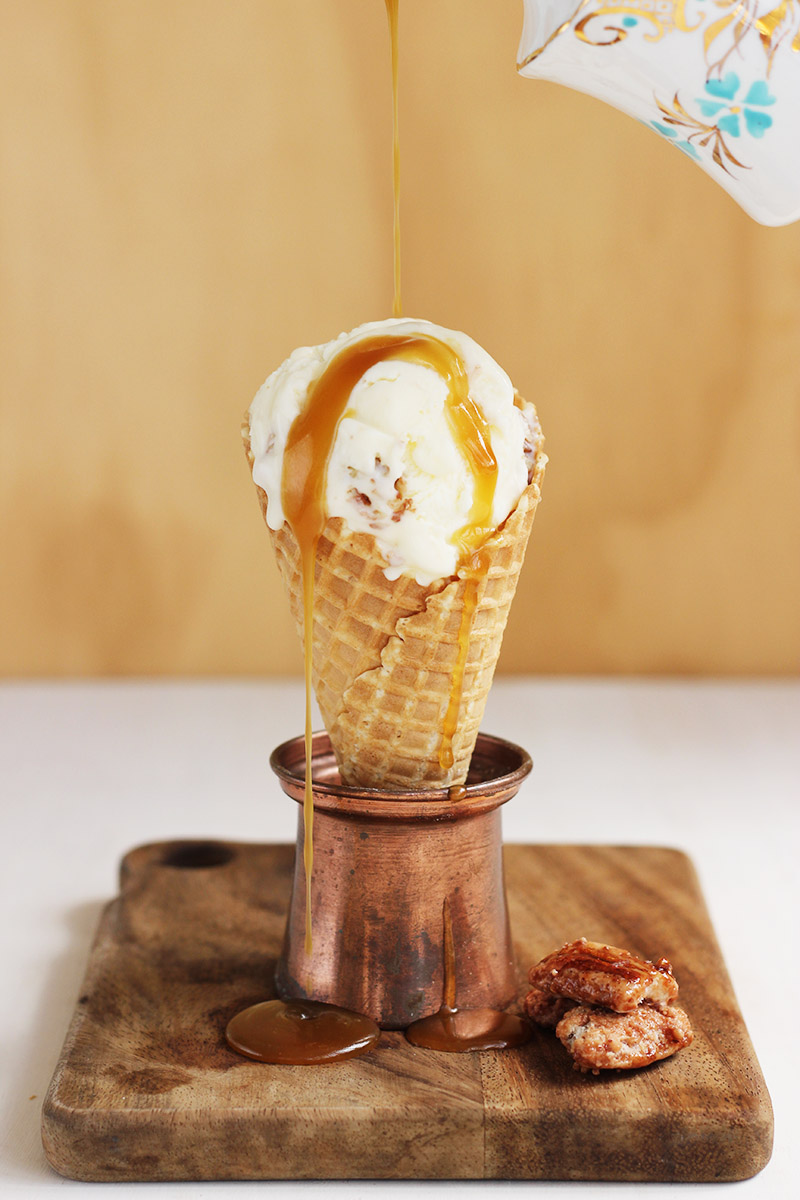 I really feel like we’ve grown up together – we went from those crazy kids who just wanted to hang out, play with our Ninja Turtles figurines and not care about how much food colouring we were eating/made of, all the way to grown ups, who want to know about the cow that our milk is coming from.

Our tastes have changed too. Gosh, have you seen the salty honey pie craze that’s going around? It’s totally justified. That pie is GOOD TIMES. Those Four and Twenty Blackbirds gals have got it on lock. Can I tell you a secret? I DREAM of working there one day. What am I saying? You probably already DO work there! What’s it like, ice cream? 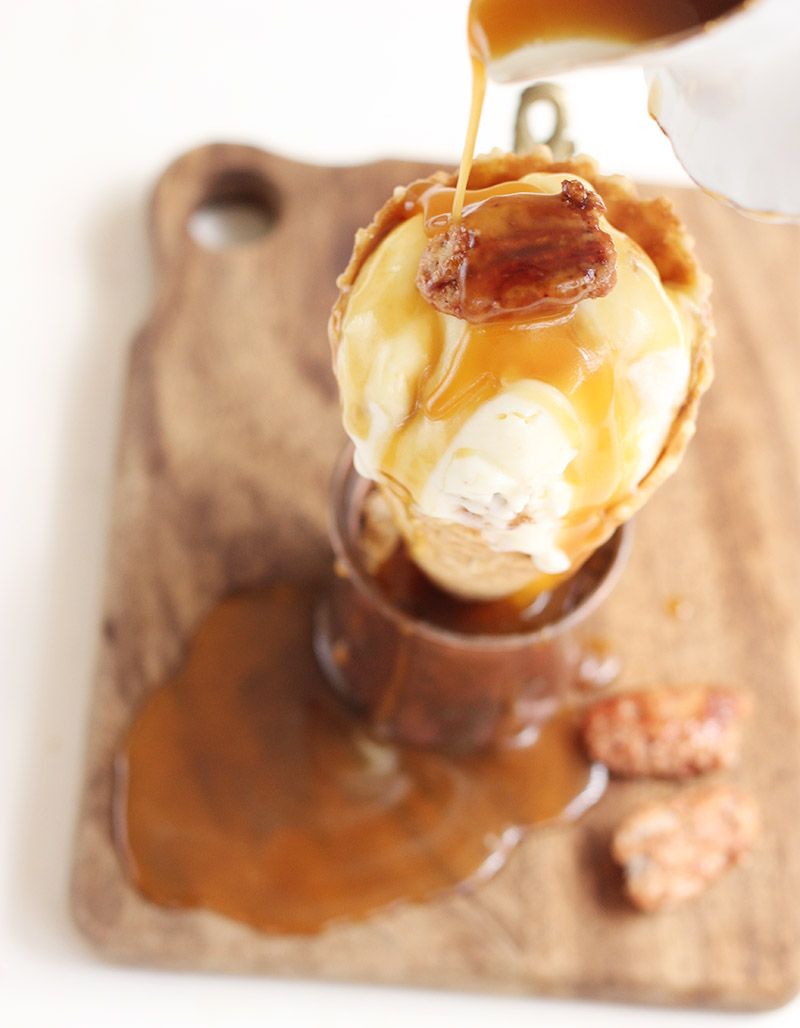 Anways, so I took the flavour of that pie and made it into this sauce for you. It sets you off so well, a little salt really highlights your sweet cream and dairy flavours. I’ve also made some pralined pecans, which I thought you might like – they’re crunchy, candied, a little savoury.  Try them on when you get this.

I hope you like it. Ugh, I bet you look delicious.

Well, I’m glad I finally got back in touch with you old friend. Trust me, it won’t be so long between cones next time. Don’t go changing! Or do, coz that’s worked out really well for you so far. OK, well, see you at the artisan scoop shop! Say hi to Jeni for me! 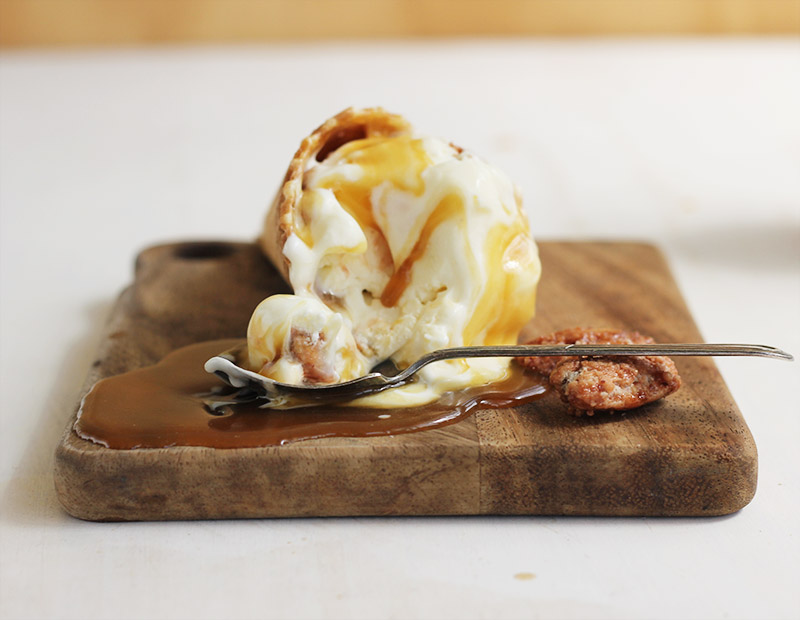 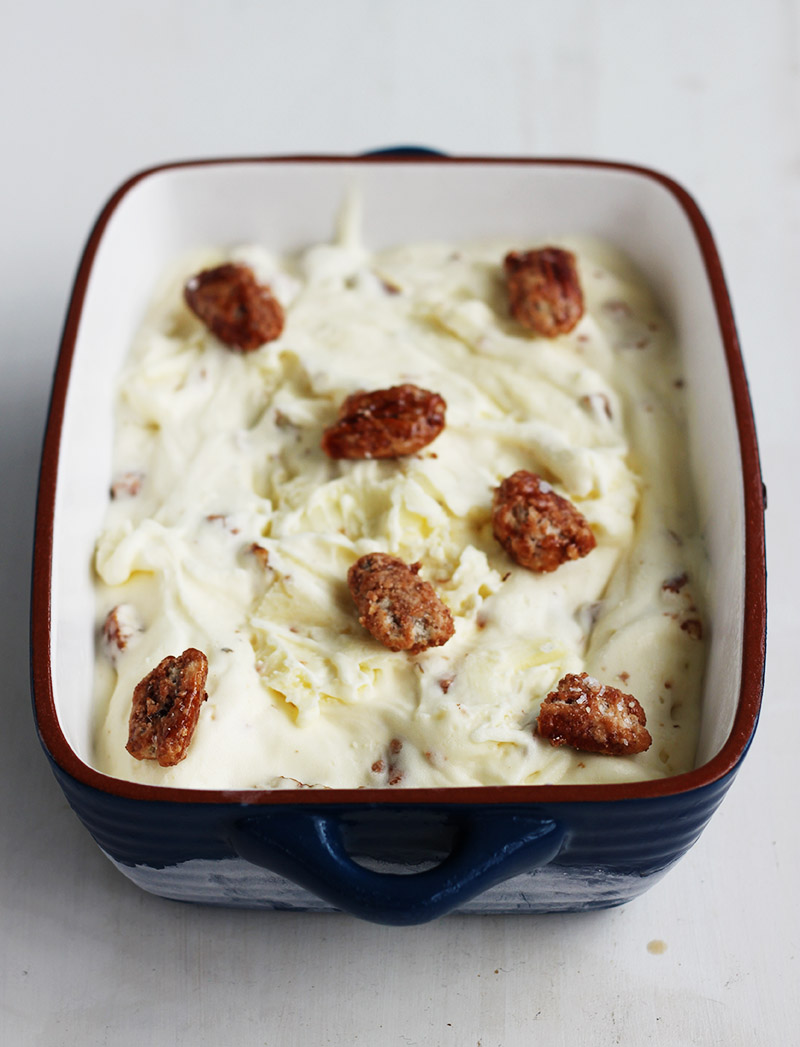 For the ice cream base:

To prepare the ice cream base, place the cream cheese and salt into a large bowl and beat together until smooth, set aside. Combine 2 tbsp of the milk with the cornflour in a small bowl and mix until smooth, set aside. Combine the remaining milk, cream, sugar and glucose in a large sauce pan and bring to a rolling boil. Keep the mixture boiling for three minutes, and then remove from the heat and stir in the cornflour mixture. Place back on the heat for about a minute, or until thickened. Turn off the heat, and slowly whisk the thickened cream mixture into the cream cheese and salt, making sure there are no lumps. Place in the fridge until cool (I leave it overnight and churn the next day). Once the mixture is cool, churn it according to the manufacturer’s instructions, stirring in the pralined pecans (recipe below) just before the ice cream is ready. Scrape into a large container and store in the freezer for up to a month.

To make the pralined pecans, line a baking sheet with greaseproof paper. Combine the pecans, water and sugar in a small saucepan and give them a good stir. Now, place over a medium heat, and cook, stirring for about 5 minutes. You want the mixture to crystallise and become sandy in texture. Once the mixture is sandy, the sugar crystals will coat the pecans, and the loose crystals on the bottom will begin to melt and turn into caramel. Keep stirring this whole time, so that the caramel on the bottom of the pan coats each crystallised pecan nut. Once all the nuts have a good coating of caramel, tumble them out onto the lined baking sheet and leave to cool (if you’re making these as a snack, a sprinkle of salt is awesome).

For the salty honey sauce:

Place all the ingredients in a medium saucepan and bring to the boil. Boil for about 2 minutes , or until syrupy and dark. Cool to room temperature and serve.