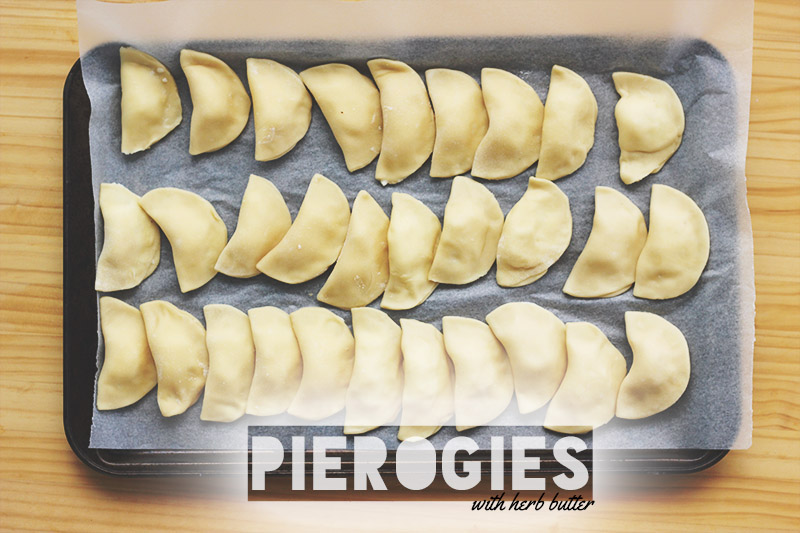 I love the cold, you see, and with the cold comes the rib-sticking, delicious, buttery delights of the kitchen. Hungarian goulash. Vareniki. Pirozhkis. Borscht. Khachapuri. Cabbage rolls. ALL the sausages. Kolaczki. Povitica. The cheesecake! And last but not least, pierogies. 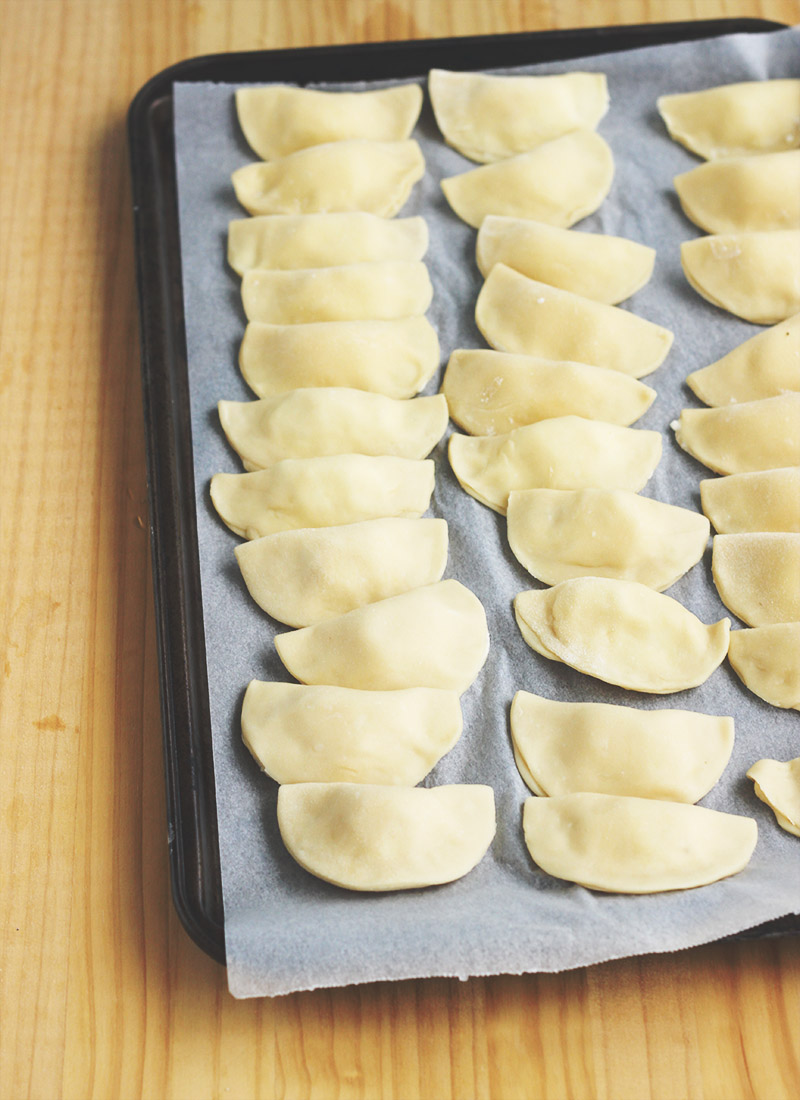 Pierogies are one of the main reasons I suspect that I have distant relatives in the Eastern Bloc, somewhere. No-one could love pierogies as much as I do without having it in their blood. I’m also SUPER pale with dark hair and eyes, so the evidence is stacking up pretty high (not at all).

Pierogies come filled with all different thangs, sometimes sweet, like plums or blueberries (blueberry pierogies, hell yes) and often savoury, like pickled cabbage, pork or beef, potatoes and cheese. I chose to go the potato + cheese route, because it has never steered me wrong before. 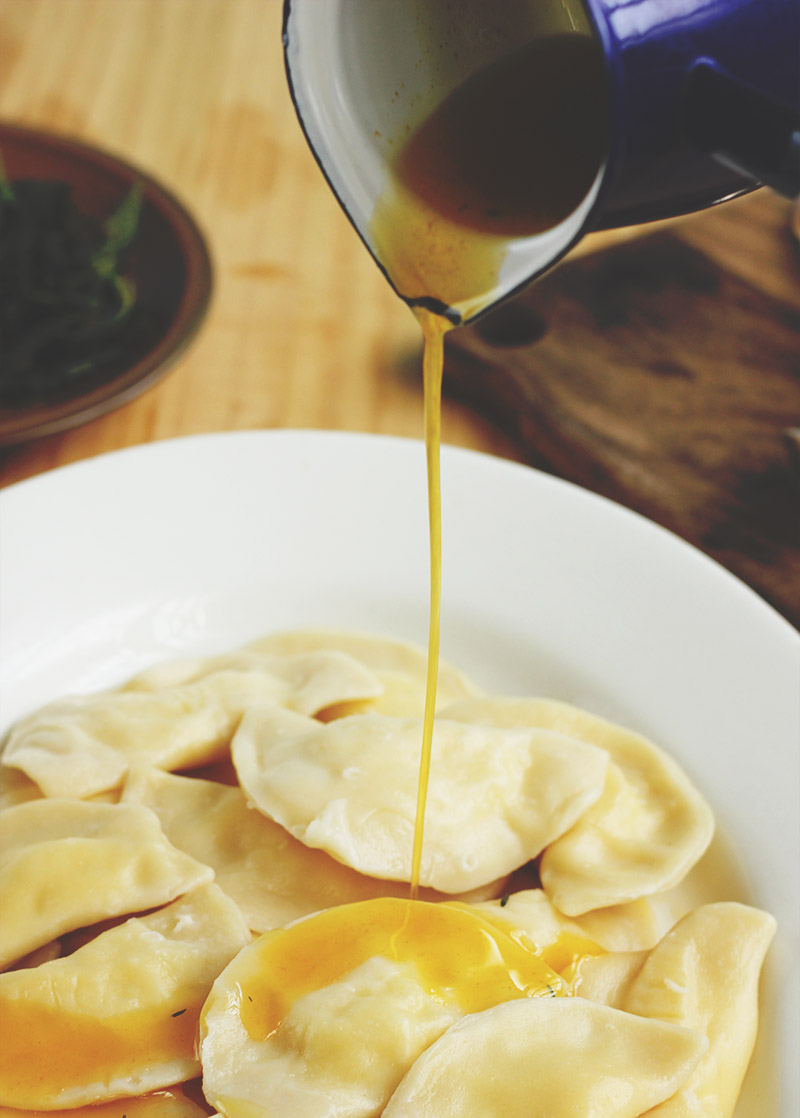 If you’ve ever made filled pasta, then you will likely find this a total breeze to do. The method is like a much simpler ravioli, in as much as the dough should be pleasantly thick, not wafer thin like good pasta, and pierogies are much less prone to bursting open when they are boiled.

The dough for pierogies is super forgiving as well, and just needs to be pressed together – similar to making gyoza, but without the pleats! OK, I’m starting to see that all dumpling making is very similar. 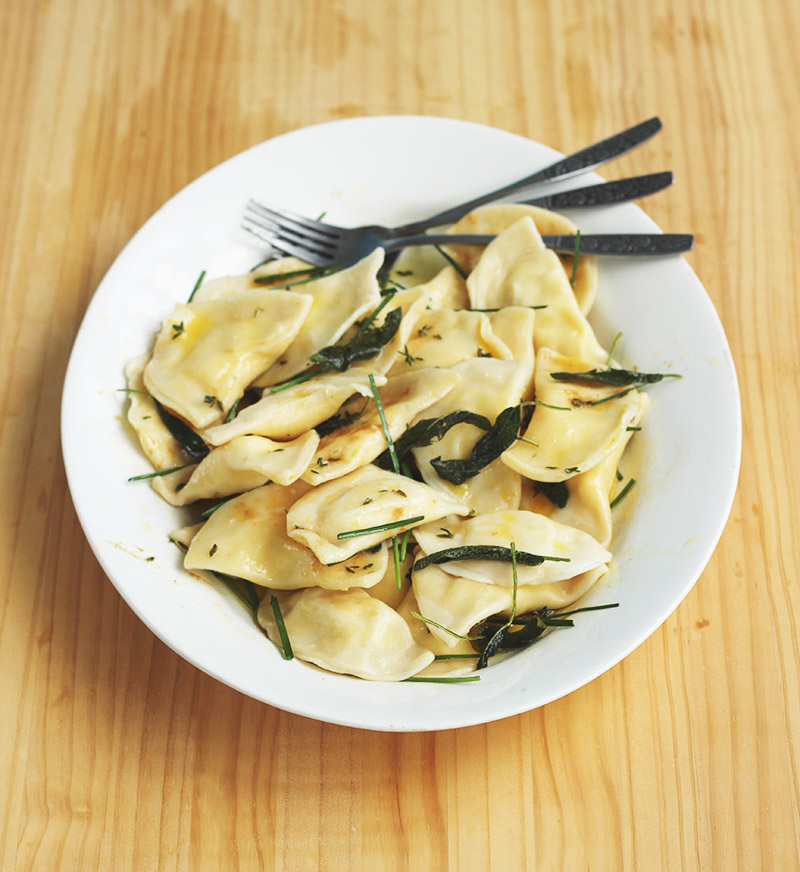 These would be heavenly served with the traditional accompaniments of slow-cooked onions, dill and sour cream, but because I can never leave well enough alone, I whipped up a herb browned butter bath for my dumplings.

This has the added bonus of crispy sage leaves and thyme tips to add some texture and crunch to your dumpling experience. Also, browned butter is never a bad idea. 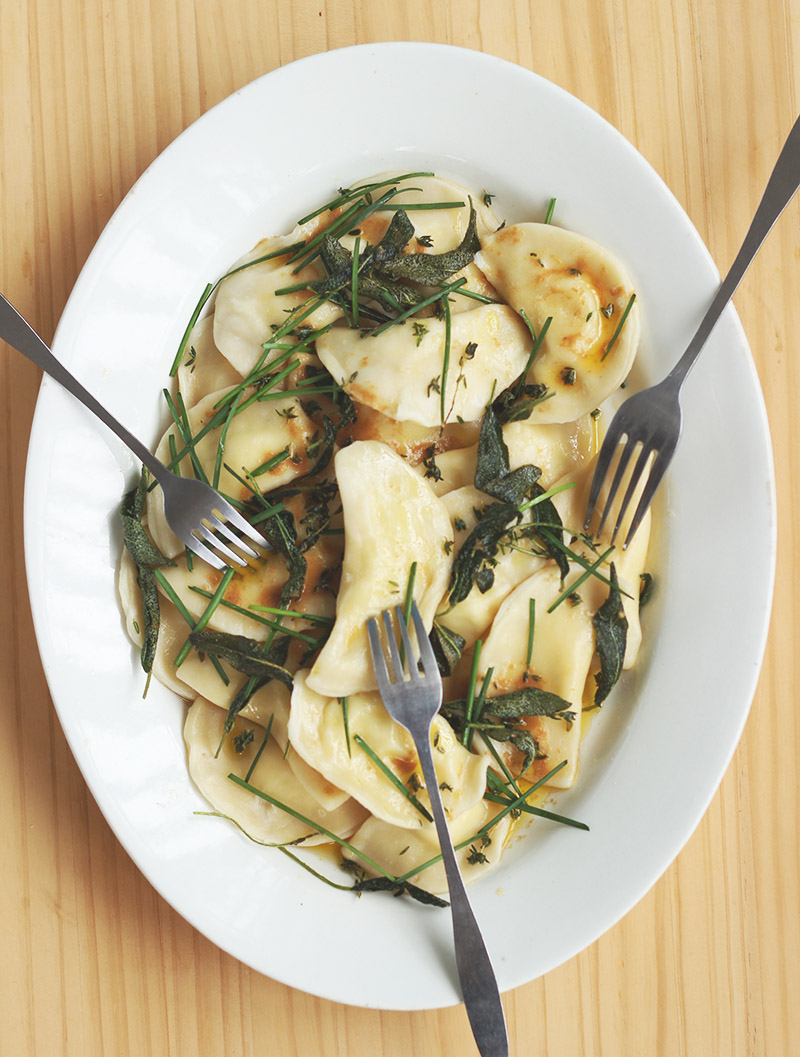 It took me about 45 minutes to make these dumplings. Which, yes, is an undertaking. But not a major one, for dumplings from scratch. I did it like this:

Put potatoes on to boil.

Set dough aside to rest.

Whip the cooked potatoes + cream cheese + nutmeg together in the mixer.

Put water on to boil.

Put butter and herbs on to melt.

So what do you think? Dumplings for the win? 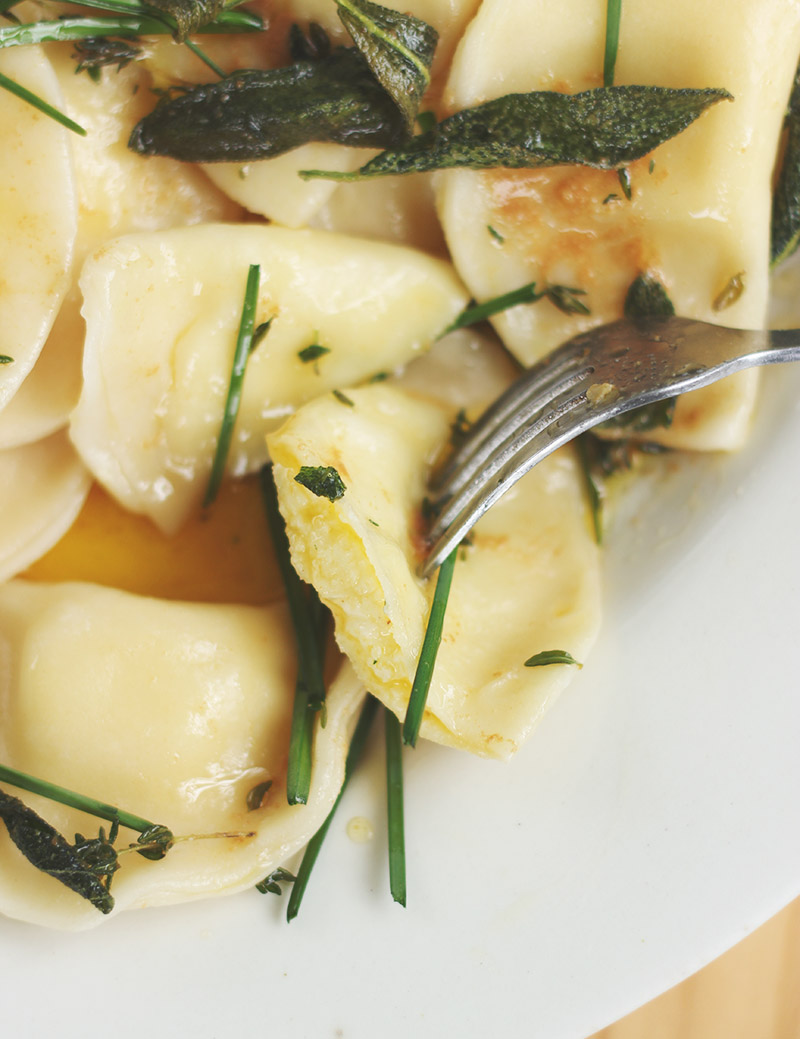 Filling and herb butter by Sarah Coates for The Sugar Hit.

For the herb butter:

First, peel the potatoes and put them on to boil. Next, place all the dough ingredients into a food processor or stand mixer fitted with a dough hook and mix until the dough comes together. Knead the dough for about 5 minutes (by hand or machine) until it is smooth, and then set it aside to rest for 15 minutes, or up to an hour (or overnight wrapped in plastic in the fridge). Once the potatoes are done, place them in the mixer bowl with the cream cheese, nutmeg and a big pinch of salt and mix until the filling is smooth (or do the same by hand).

Take one third of the dough and roll it out to a thickness of about 1/8 in (2 mm). Using an 8cm cutter, cut as many rounds as you can. I ended up with 10 rounds from each piece of dough. Place a tsp of filling in the centre of each round, and then fold the edges up over the filling and press them together to make a half-moon shape. Place each one on a lined baking sheet, not touching each other, while you finish the rest of the dumplings.

To cook the dumplings, place them in a large pot of boiling water. Once they float to the surface, they need two minutes, and then they’re done. While the dumplings cook, make the herb butter. Place the butter into a frying pan, and when it has melted and is foaming, add the sage and thyme leaves. Continue to cook until the butter starts to brown, and then add the juice of half a lemon and turn off the heat. Toss the cooked pierogies in the butter, scatter with chives and serve.